“Here she comes, beaming with pride and something to say…”

Those words open the theme song of animated series Alma’s Way, and what Alma has to say is resonating with children – especially Latino children who might not often see themselves represented on TV.

The Realities Around Us

Studies have shown about 6 in 10 parents say it’s important for their children to see diversity reflected in the characters they view on screen, and that kind of positive representation not only goes a long way in affirming their experiences, it also provides opportunities for them to better understand cultures different from their own. 1

“When our partners at Fred Rogers Productions shared the Alma's Way concept with us, we knew we wanted to play a part in bringing this important worldview and learning opportunity to young children," says Sally McCrady, chair and president of the PNC Foundation. "Investing in early education is a powerful way to create meaningful impact in the communities we serve. That's the driving force behind PNC Grow Up Great, our bilingual, $500 million philanthropic initiative that’s been making an impact across our markets for 18 years now.”

Alma’s Way is the brainchild of Sonia Manzano, one of the very few Latina actors on television when she began her role as Maria on Sesame Street. She was a regular on the educational program from 1971 to 2015.

Manzano was approached with the opportunity to create a show, and she developed her lead character, Alma – a confident 6-year-old, Puerto Rican girl from the Bronx, N.Y. Her life is surrounded by a rich and diverse set of family, friends and neighbors.

“A lot of the show borrows from Sonia’s experiences as a child and from all of our life experiences,” says Olubunmi Mia Olufemi, the series’ supervising producer. “The show has a very diverse development team, with a lot of us having lived in New York and a variety of other places.”

The show’s title refers to “Alma’s Way” of seeing the world. Manzano wanted children to see that everyone’s way is different and valid. In every story, Alma speaks directly to the audience in “Think Through” moments, where she reflects on a situation, considers others’ points of view and makes tough decisions – all critical components of learning to think for herself.

“A guiding principle Sonia put into place was, ‘I want kids to know that they have a mind and they can use it,’” Olufemi says. 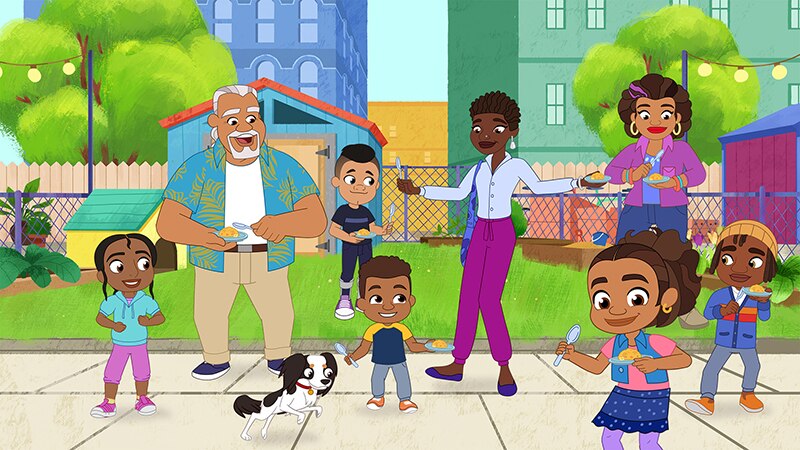 Alma, her family and some of her neighbors are Puerto Rican, Cuban, Mexican, Dominican and even Bangladeshi, showing the breadth of the population in the neighborhood. Viewers get a lens into characters’ lives and cultures, showing their worlds as they are, from the music they listen and dance to, to the Spanglish Alma speaks, to the mofongo Abuela Cecilia cooks – the recipe is even posted on the Alma’s Way website.2

The team wants to show kids “if you can see it, you can be it,” so the characters have a wide range of professions. Alma’s Mami is a musician and music teacher and Papi is a veterinarian, while her Tía Gloria is a New York City transit conductor and Uncle Nestor is a playwright and musical director of a Bomba ensemble.

“Studies in children’s media show that positive representation of specific cultural and racial groups has a huge impact on how kids view themselves,” Olufemi says. “Likewise, not seeing someone whose hair or skin looks like yours. For example, I grew up reading Seventeen magazine and, at the time, none of the makeup shades they advertised worked for me. That means you don’t exist. You grow up feeling outside, like you don’t represent any sort of beauty or anything in the world.”

Eddie Mambo, Alma’s cousin, has cerebral palsy and is another example of intentional inclusion.

“It was really important to us to have a character with a visible disability so they know he is different,” Olufemi says. “But there’s no special episode about Eddie. He just is who he is.”

Aside from the PNC Foundation’s involvement with Alma’s Way and Daniel Tiger’s Neighborhood, PNC Grow Up Great and FRP have partnered since 2016 for Be My Neighbor Days that are celebrated in nearly 45 PNC markets across the country.

“We have a mutual interest in families and getting them engaged, and that’s where Be My Neighbor Days really took off,” says Paul Siefken, president and CEO of Fred Rogers Productions, and ex officio member of the PNC Grow Up Great Advisory Council for PNC Grow Up Great.

Siefken also noted that thinking about diversity, equity and inclusion should be key component when thinking about the work FRP does "rather than an add-on.”

“We’re looking at how we can celebrate racial and ethnic identities in these events," he adds. "We do this by working with community leaders and organizers on how Be My Neighbor Days can represent the people in the community and celebrate the children in that community in a meaningful way."

That same commitment to diversity, equity and inclusion flows into its programming.

While technology and the way we deliver media changes over time, the basic tenets of early childhood development remain the same, Siefken says.

“It’s still about children learning how to manage their feelings, interact with people and navigate the world they’re living in,” he explains. “We have experts who have studied the way children’s world view develops, so we can be sure we’re speaking to them in an age-appropriate level. Daniel is for ages 2-4; Alma is for 4-6. It’s a whole lifetime of difference in advancement, so the social-emotional learning is very different.”

This early childhood tenet has led to a space where young viewers can learn and delight in the diverse cultural world of Alma’s Way – a show with a little girl who has “something say.”