Moments of Serendipity As Our Teams 'Light the Night'

In addition to raising nearly $1 million for the Leukemia and Lymphoma Society, our colleagues also experienced chance encounters and meaningful connections

Moments of Serendipity As Our Teams 'Light the Night'

In addition to raising nearly $1 million for the Leukemia and Lymphoma Society, our colleagues also experienced chance encounters and meaningful connections

In late October, as Asalia Goldberg and her fellow Cell Therapy team colleagues eagerly awaited the start of the Leukemia and Lymphoma Society’s Light The Night walk in Mercer County, New Jersey, Asalia saw a young man, standing alone. He carried a white lantern — a survivor.

Not one to let anyone experience the walk alone, Asalia waved him over, inviting him to walk with her group. Naturally, they began chatting. 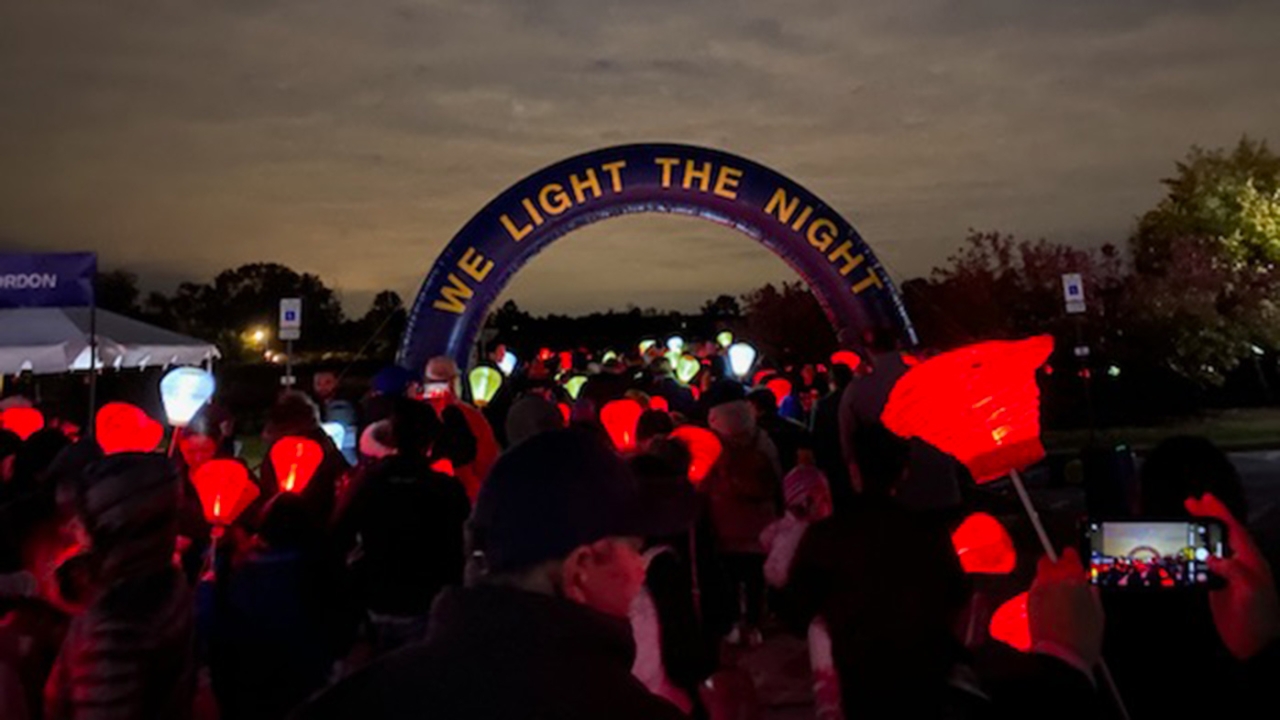 “We learned that this man received CAR T cell therapy. And not only that, it was BMS’ CAR T cell therapy,” she said. “As he shared his experience with us, his eyes gleamed with gratitude for the work we do,” Asalia said. “And we were reminded of just how deep our impact runs.”

The experience was “miraculous” for Asalia, and this story is one of countless from the annual walks that support the Leukemia and Lymphoma Society (LLS), with which Bristol Myers Squibb has had a long-standing partnership. Year over year, we continue to surpass our fundraising and participation goals. This year, we raised more than $960,000, beating our goal of $850,000. Nearly 800 people (the goal was 700) participated in walks that occurred across the country throughout the fall months. As a result of our efforts, the LLS this year dedicated a research grant in our honor to support health equity.

Remembering those we have lost

For the past seven years, Rachel Howard, senior territory business manager, Oncology, has solemnly illuminated a gold lantern in remembrance of her mother, Ellen. Where she initially felt extremely alone following her mother’s passing in 2016, her involvement in Light The Night has helped her build a community of people who understand the hurt and the loss — and who share hope for a future without blood cancers.

This year, in addition to serving as a team captain for the North Shore Chicago Light The Night walk in October, Rachel was also asked to participate in the opening ceremony at the event. There, she and other select participants were the first to light each of the colored lanterns — white for survivors, red for supporters, and gold in memoriam — which is followed by a sea of color lighting the night sky.

Rachel’s mother was diagnosed in 2006 with myelodysplastic syndrome (MDS) and lived with the blood disorder for nine years. In 2015, she was diagnosed with acute myeloid leukemia (AML) and, after a failed bone marrow transplant, passed away in 2016.

“My mom did survive for a long time with blood cancer. But ultimately, there weren’t any other options for her.... And that’s why our work is so important and why I continue to be involved in Light The Night,” Rachel said.

As David Lin, senior vice president, U.S. Cell Therapy, and corporate walk chair of the company’s Light The Night program, prepared to embark on the Morris County, New Jersey walk, he told his colleagues about someone he used to work with, a young woman diagnosed with multiple myeloma, who he hadn’t seen for quite some time.

“I told my team I was going to be walking for her,” David said.

Meanwhile, this young woman, who has spent the last seven years in remission, saw her former colleague’s name in the event program for the Morris County walk, and contacted him on LinkedIn.

A week later, the former colleagues were walking side by side in the Mercer County walk.

“I actually think it was meant to be that I got reunited with a friend so I can better understand her journey and what it’s been like for her family,” David said. “There’s just something about the total atmosphere at Light The Night that makes you say, ‘This is bigger than me. It’s bigger than the walk. It’s bigger than BMS.’ We are doing our part at BMS but we need all the parts to come together to make a real impact.”

Read more stories about our colleagues who were inspired to participate in Light The Night.

Bristol-Myers Squibb is a global biopharmaceutical company whose mission is to discover, develop and deliver innovative medicines that help patients prevail over serious diseases. For more information, please visit www.bms.com or follow us on Twitter at http://twitter.com/bmsnews.