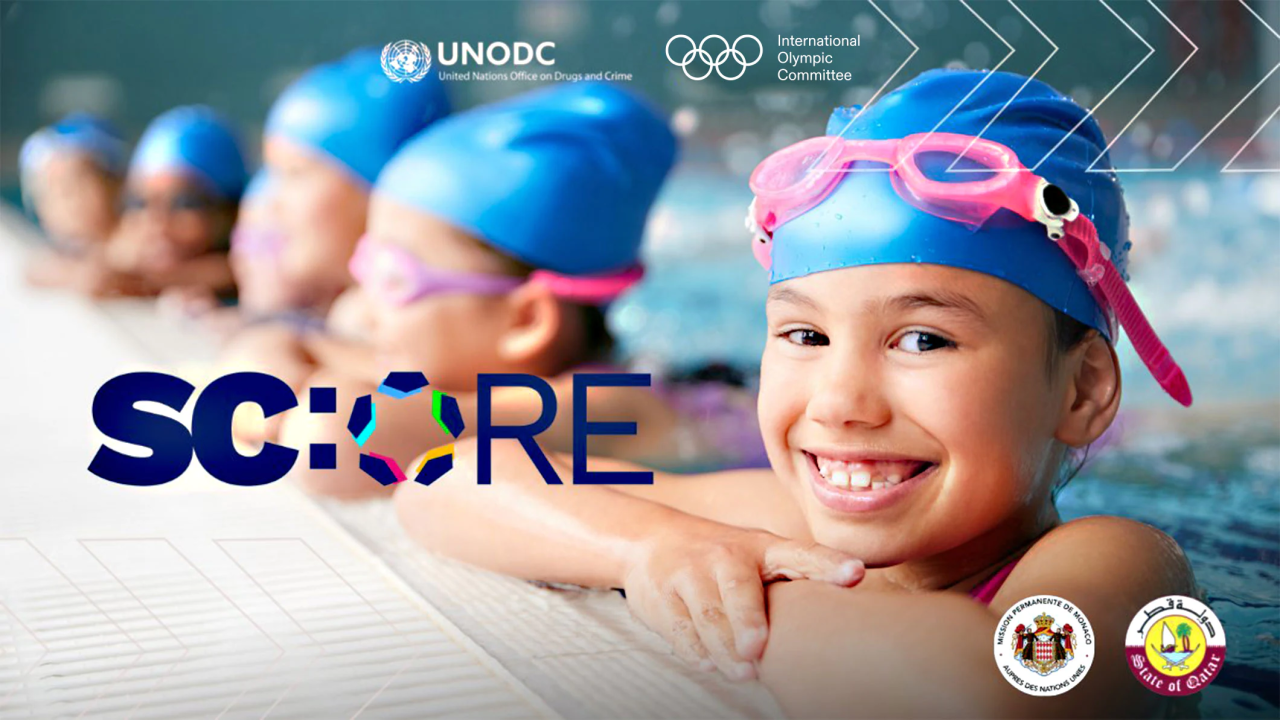 Sport and Olympism play a key role in building safer communities and preventing violence and crime among young people. Addressing Member States of the United Nations (UN) in New York, IOC Member Kirsty Coventry made an appeal for increased cooperation and partnerships to leverage the contributions of sport in preventing violence and crime and building peaceful, safe communities.

She was speaking at the Partnerships in Community-Based Crime Prevention high-level forum at the UN headquarters, chaired by HE Hikihara Takeshi, Chair of the 31st Session of the UN Commission on Crime Prevention and Criminal Justice (CCPCJ). She also attended the launch event of Sport against Crime: Outreach, Resilience, Empowerment (SC:ORE), a joint IOC - UN Office on Drugs and Crime (UNODC) initiative that supports the effective use of sport to prevent and combat violence and crime.

“Sport is not just physical activity,” Coventry told the forum. “It’s a powerful means to build bridges, bring people together and contribute to building more peaceful and safer communities.”

“Sport-based policy and programmes in the context of community-based interventions can play a critical role in empowering youth and community members to become active agents of positive change and support crime prevention efforts,” said Coventry. “SC:ORE is an important part of our collective work on sport, peace and safe communities through Olympism 365.”

The IOC’s invitation to address the forum follows the extension of the memorandum of understanding (MoU) between the IOC and the UNODC, signed in November 2021.

With a particular focus on preventing youth crime, violence and drug use through sport, the MoU with the UNODC continues the longstanding partnership between the two organisations – and, for that matter, the close relationship between the IOC and the UN more broadly.

“We are excited to have engaged in a partnership with the IOC to strengthen youth resilience through sport and help us expand important work in this area,” said Jo Dedeyne-Amann, Chief of the Secretariat of the Governing Bodies and Secretary of the CCPCJ at the UNODC Division of Treaty Affairs. “It is clear that our mandates, expertise and networks are complementary when it comes to the use of sport for positive youth development, the creation of safe communities and the prevention of crime.”

SC:ORE illustrates some of the many ways that sport can serve as a tool for crime prevention. Focusing on sport-based learning and skills training, it aims to support the effective use of sport to prevent violence and crime and to enhance the role of sport and the sports sector in building peaceful and safe communities.

This will be done by producing concrete policy guidance and toolkits for policymakers and programme implementers, while also delivering demonstrative community projects to further develop knowledge and understanding of effective sport-based community-focused crime prevention projects.

The programme is being developed jointly by the IOC through its Olympic Values Education Programme (OVEP) and the UNODC as part of the IOC’s Olympism 365 strategy and follow-up General Assembly resolutions A/RES/74/170 and A/RES/76/183 on “Integrating sport into youth crime prevention and criminal justice strategies”.

Olympism 365 contributes to the IOC’s aim to use sport for sustainable development – as set out in Olympic Agenda 2020+5, the strategic roadmap for the Olympic Movement.

The IOC's partnership with the UNODC in support of this objective builds on the UNODC’s “Youth Crime Prevention through Sport Initiative” and the Line Up Live Up sport-based life skills training curriculum. Both initiatives seek to leverage the power of sport to reduce crime and, to this end, offer technical advice and build the capacity of policymakers and practitioners to effectively address risk- and protective factors related to criminal behaviour through sport-based interventions. The partnership is also allied to the UNODC Strategy 2021-2025, which guides the UNODC’s mission to contribute to global peace, security, human rights and development by making the world safer from drugs, crime, corruption and terrorism.

Further to the launch, the IOC and the UNODC will organise policy workshops and capacity-building activities for implementing partners, including National Olympic Committees, civil society organisations and national and local policymakers. The programme is then due to be implemented in two pilot countries and regions, with the aim of creating safe spaces to engage and empower young people through sports activities and help reduce risk factors for crime and community violence.

SC:ORE is part of the IOC’s Olympism 365 strategy, which is designed to connect people with the Olympic values – everywhere, every day.

Olympism 365 is the engine behind Recommendation 10 of Olympic Agenda 2020+5, which commits to “strengthen the role of sport as an important enabler for the UN SDGs”. Aligning the Fundamental Principles of Olympism with national development plans and local priorities, Olympism 365 aims to create change in four interconnected areas:

As Coventry told the UN forum this week: “The aim of the Sport, Peace and Safe Communities pillar of Olympism 365 is to work in partnership to realise the potential of sport and Olympism in society to promote peace, and reduce anti-social behaviour, crime and violence by helping people find a community and make positive social connections.”