November 1, 2022 /CSRwire/ - Sportification of cities – or how cities around the world can become playgrounds to bring people closer to sport, was the theme of this year’s edition of the Smart Cities and Sport Summit held in Lausanne, the Olympic Capital.

International Olympic Committee (IOC) President Thomas Bach opened the Summit on Tuesday in the presence of Seoul Mayor Oh Se-hoon, Lausanne Mayor Grégoire Junod and Lillehammer Mayor Ingunn Trosholmen. President Bach shared the Olympic Movement’s vision of how cities’ initiatives can bring sport closer to the people, and how this is essential in building a healthier society.

“The world of sport is at the forefront of how the global pandemic has changed habits,” he said in his keynote address to the Summit. “It is, however, where an opportunity lies for the Olympic Movement. The IOC is built on the belief that we can make the world a better place through sport. In the face of the confluence of crises, our mission to put sport at the service of humankind has never been more relevant or urgent.”

This is in line with the objective of Olympic Agenda 2020+5, the strategic roadmap for the future of the Olympic Movement, which looks to strengthen the role of sport as an important enabler for the UN Sustainable Development Goals, and thus provide access to sport for people across the world.

“Our overriding mission is to make the world a better place through sport – and one of the best ways to demonstrate this mission in action is to ensure that people and communities benefit for generations to come from hosting the Olympic Games,” President Bach continued.

Examples of such benefits are numerous. The Winter Youth Olympic Games Lausanne 2020 stand out thanks to their human and sportification legacy, as 640,000 spectators cheered on and followed the young athletes, and got active by trying out sports or taking part in cultural activities. Some 80,000 schoolchildren attended an Olympic event for the first time and were able to experience Olympism through the many activities organised.

With less than two years to go until the Games, Paris 2024 has demonstrated how encouraging physical activity and promoting the benefits of sport can happen before the Games take place. For this, the French capital and the French Ministry of Education have introduced a daily 30-minute exercise programme in primary schools across the country. Since its launch, one-third of French schools have taken part in the programme, demonstrating that the Paris 2024 legacy is already being built before the Games. 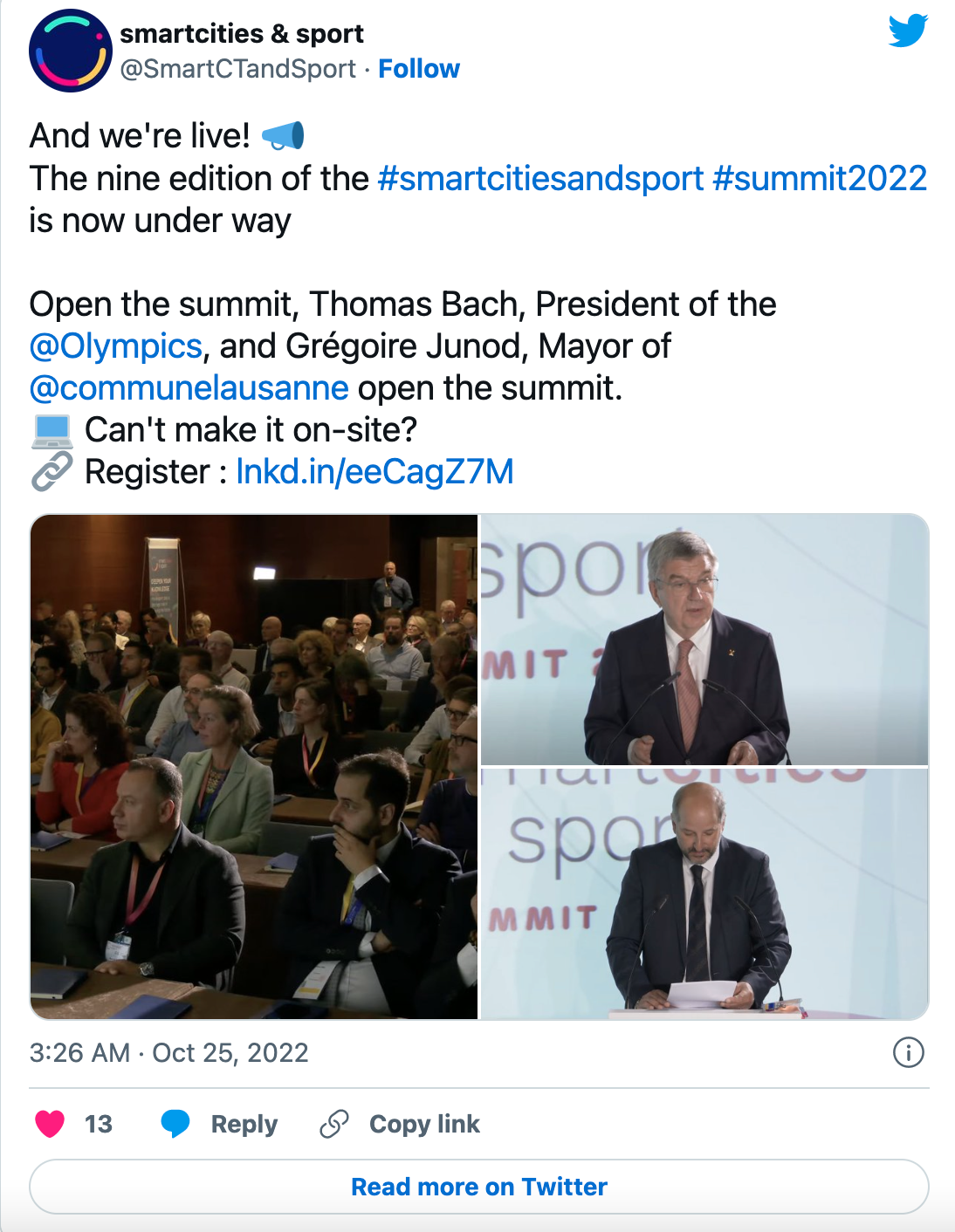 “All of these activities have one overriding goal: encouraging regular physical activity for people,” said President Bach. “It is vital for cities to create sports facilities and urban centres within the neighbourhoods so young people are directly confronted with sports from an early age.”

Every year since 2014, the Smart Cities and Sport Summit, an initiative of the World Union of Olympic Cities, has been bringing together former and future Olympic Games hosts, and targeting representatives of cities and regions across the world willing to develop smart strategies that connect sport and cities.