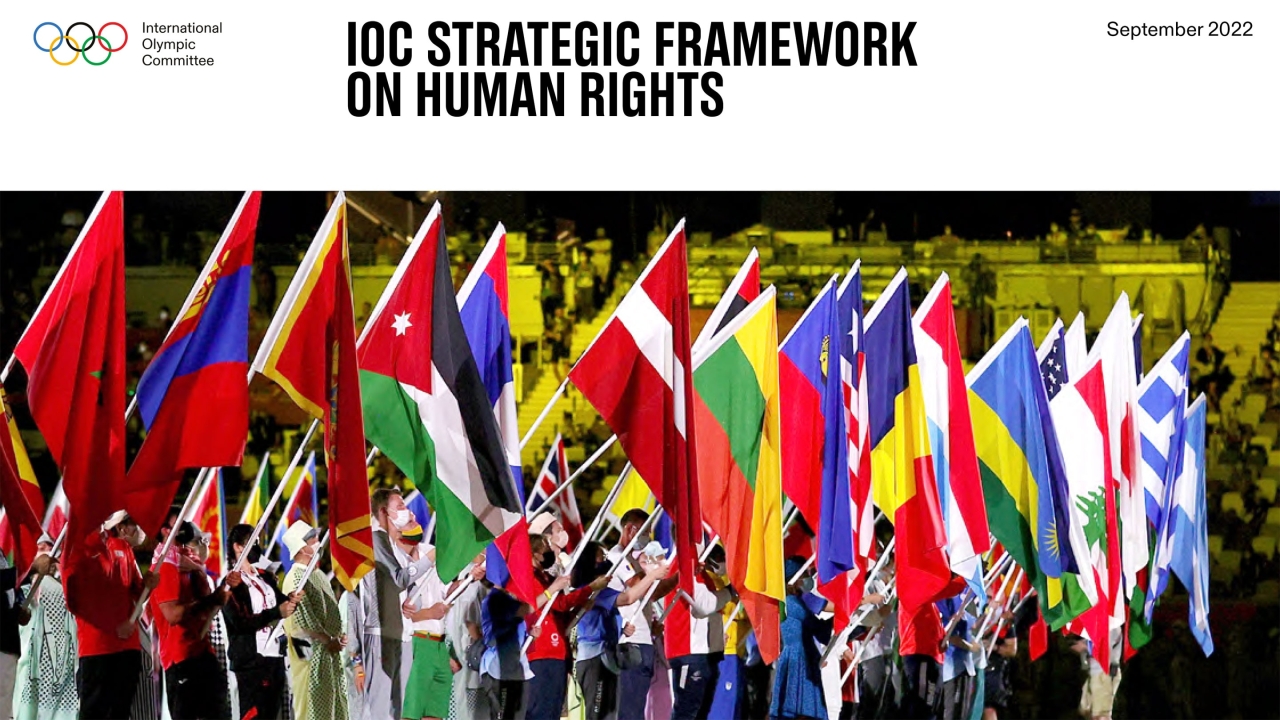 The International Olympic Committee (IOC)’s Strategic Framework on Human Rights was approved today by the IOC Executive Board (EB). The Framework will fundamentally shape the working practices of the IOC, the Olympic Games and the Olympic Movement, ensuring that human rights are respected within their respective remits.

In line with Olympic Agenda 2020+5, the IOC Strategic Framework on Human Rights covers and provides specific action plans for each of the IOC’s three spheres of activity: the IOC as an organisation, as owner of the Olympic Games, and as leader of the Olympic Movement.

This new strengthened approach will inform processes and decisions related to the IOC administration and supply chain, the selection of future Olympic Games hosts and the delivery of the Olympic Games, as well as athletes’ representation, and safe and inclusive sport.

The Framework builds on the work undertaken over the last few years by the IOC to address human rights questions within the scope of its responsibility, and recent recommendations from experts. It expands on the key principles that were presented to the 139th IOC Session on 4 May 2022.

The Framework builds on the recommendations produced in March 2020 by Prince Zeid Ra’ad Al Hussein, former United Nations (UN) High Commissioner for Human Rights, and Rachel Davis, Vice-President and Co-Founder of Shift, the centre of expertise on the UN’s Guiding Principles on Business and Human Rights (UNGPs).Key outcomes of this consultation with experts were to date the establishment of an IOC Human Rights Unit in March 2021 and the release of the IOC Framework on Fairness, Inclusion and Non-Discrimination on the Basis of Gender Identity and Sex Variations in November 2021.

“The overarching mission of the Olympic Movement is to contribute through sport to a better world. Human rights are in fact firmly anchored in the Olympic Charter. We will be strengthening this even further in the future. Our mission, to put sport at the service of humankind, therefore goes hand-in-hand with human rights,” IOC President Thomas Bach said. He continued: “I want to thank Prince Zeid Ra’ad Al Hussein and Rachel Davis for their work. They built the basis for this Strategic Framework on Human Rights for the Olympic Movement.”

Welcoming the IOC’s announcement, Prince Zeid and Rachel Davis said: “Shift welcomes the IOC's public commitment to the UN Guiding Principles on Business and Human Rights, announced today in its new Strategic Framework on Human Rights. This is a significant step for the organisation, and it also sets an important precedent for all sports bodies across the Olympic Movement. As the organisation moves forward, new approaches will be needed to effectively address some of the most severe impacts facing athletes today, including harassment and abuse, voice and representation, and the need for greater access to remedy - informed by the perspectives of those directly affected. We look forward to working alongside other stakeholders to support the IOC to meet its responsibility to respect human rights in practice.”

With the approval of the Strategic Framework on Human Rights, the IOC ensures that people’s rights are put at the core of its operations and are respected in line with international agreements and standards – within its remit.

To achieve this, the IOC has defined strategic intents for 2030 for each of its spheres of responsibility:

All three strategic intents will be carried out in alignment with the UNGPs, which are the standard of reference for the IOC Strategic Framework on Human Rights. They are already widely embraced by many stakeholders inside and outside the Olympic Movement, including sports governing bodies and Olympic Partners, and are already referenced in several key IOC documents, including the Olympic Host contracts, the IOC Supplier Code and contractual agreements with commercial partners.

As a first step towards meeting these strategic intents, the IOC has identified 16 objectives to be implemented by 2024, including:

These first objectives will contribute towards the IOC’s longer-term strategy and address the most pressing risks that have been identified.

A long-term commitment to lead by example

The IOC’s commitment to improving the promotion and respect of human rights within its remit is long-standing, and its foundations can be found within the Olympic Charter.

In recent years, important work has been carried out in a number of areas, such as inclusion, gender equality and safe sport, sustainability in all its dimensions, the integration of media freedom safeguarding provisions in the Host Contract, and Olympic Solidarity measures and social development through sport activities.

The IOC also established a Human Rights Unit in March 2021 and released the IOC Framework on Fairness, Inclusion and Non-Discrimination on the Basis of Gender Identity and Sex Variations in November 2021.