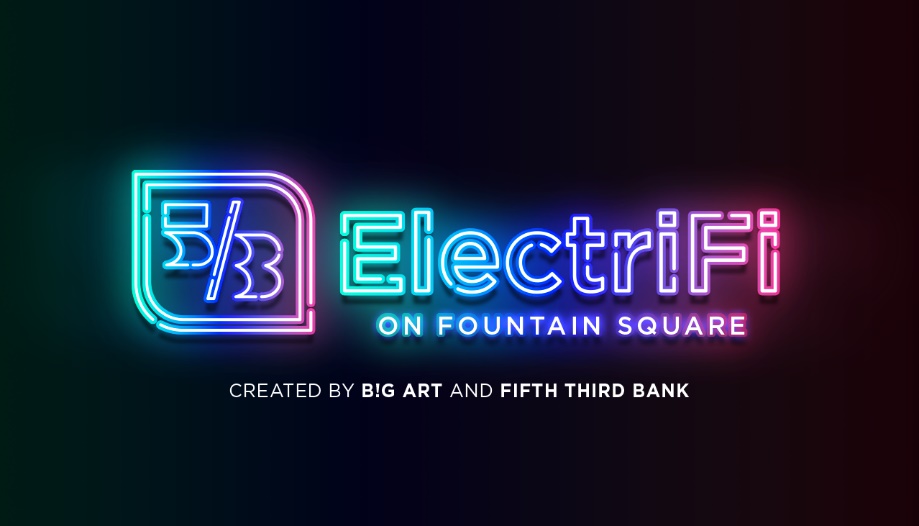 CINCINNATI, September 19, 2022 /CSRwire/ - BLINK, the nation’s largest outdoor light and art experience known for its immersive components, returns for the first time since 2019 to showcase a diverse lineup of talent in October including an exciting exhibit from Fifth Third Bank.

BLINK, Illuminated by ArtsWave, operates on a large scale, using the entire city of Cincinnati as its canvas. The four-night, 30-city-block event inspires innovation and creativity through street art, projection mapping and light-based installations. Once again, Fifth Third will be transforming Fountain Square – one of Cincinnati’s central and most recognizable landmarks – into an experience called ElectriFi.

“We are thrilled to see BLINK return and to reprise Fifth Third’s role as a creative force producing something awesome on Fountain Square and at the heart of the city,” said Doug Sackin, innovation design technologist. “Being able to support BLINK and the arts is extremely important to us, and this year we are excited to incorporate renewable energy, which is something we care very much about.”

The ElectriFi vision was developed by Fifth Third’s design and innovation team and is inspired by the Bank’s globally recognized efforts toward environmental sustainability. To design, plan and build what the Bank hopes will be a can’t-miss experience for attendees, Fifth Third is collaborating with B!G ART, a Calgary-based interactive public art collective.

The Square’s main attraction, “The ARRAY” is a massive installation offering an abstract, mixed media depiction of a solar powered ecosystem. It will appear as a futuristic landscape of reflection, color, light and sound.

"Not only did the creative concept resonate with our team, so did the passion Fifth Third has for pursuing, financially supporting and utilizing sustainable energy," said Paul Magnuson, chief imagineer at B!G ART. "We are excited to emulate this passion and commitment in a creative, large-scale, interactive installation that celebrates sustainability."

While BLINK provides contributing artists like Fifth Third with a unique opportunity to exhibit work, the Bank also sees the significance for the city of Cincinnati on an international scale.

Fifth Third Bancorp is a diversified financial services company headquartered in Cincinnati, Ohio, and the indirect parent company of Fifth Third Bank, National Association, a federally chartered institution. As of June 30, 2022, the Company had $207 billion in assets and operates 1,080 full-service Banking Centers, and 2,153 Fifth Third branded ATMs in Ohio, Kentucky, Indiana, Michigan, Illinois, Florida, Tennessee, West Virginia, Georgia, North Carolina and South Carolina. In total, Fifth Third provides its customers with access to approximately 56,000 fee-free ATMs across the United States. Fifth Third operates four main businesses: Commercial Banking, Branch Banking, Consumer Lending, and Wealth & Asset Management. Fifth Third is among the largest money managers in the Midwest and, as of June 30, 2022, had $512 billion in assets under care, of which it managed $54 billion for individuals, corporations and not-for-profit organizations through its Trust and Registered Investment Advisory businesses. Investor information and press releases can be viewed at www.53.com. Fifth Third’s common stock is traded on the NASDAQ® Global Select Market under the symbol "FITB."

B!G Art was built for one purpose – to make more interactive public art. They design, build and promote interactive, and immersive, works of wonder to inspire the next. B!G Art embraces the technology of yesterday, today, and tomorrow to create large-scale, tour-ready, turnkey installations. Passionate about what they do, they are committed to delivering inspiring encounters with each piece. Whether a customer chooses something from their current catalog, or connects directly for a custom commission, B!G Art prides itself on delivering robust, safe, and reliable installations.

Last experienced by over 1.3M people in 2019, BLINK, Illuminated by ArtsWave, welcomes all to Cincinnati, Ohio October 13-16, 2022. The four-day, 30 city block, outdoor art experience is sure to be unforgettable, uniting street art, projection mapping and light-based installations.

Not only does the event speak to the dynamic evolution of the Cincinnati art community, it calls upon the city’s deep roots in supporting the arts. BLINK is illuminated by ArtsWave, the first and largest community campaign in the nation and the primary way that Cincinnati funds its arts. When tens of thousands of people and hundreds of companies give to ArtsWave, they support 150 cultural organizations and projects each year like BLINK that make our region vibrant. Donations to BLINK and other arts projects and organizations can be made at artswave.org/give.

BLINK is produced and curated by its Executive Partners - the Cincinnati USA Regional Chamber, AGAR, and the Haile Foundation, and produced in conjunction with its Partners ArtWorks, Cincy Nice, and ish - to provide opportunities for regional artists and bring in global creators all in the pursuit of a stronger community.