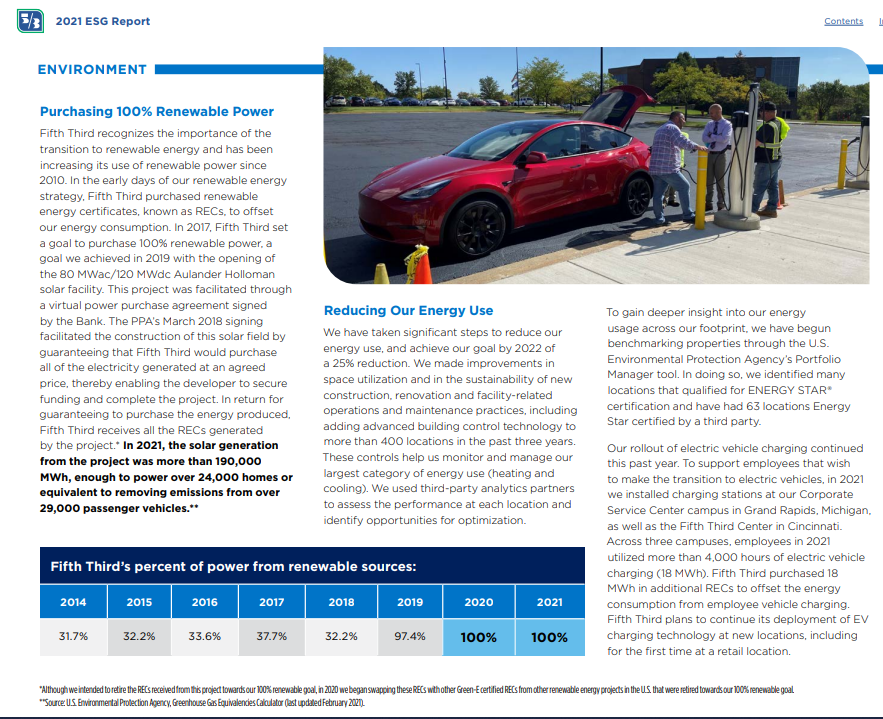 Fifth Third recognizes the importance of the transition to renewable energy and has been increasing its use of renewable power since 2010. In the early days of our renewable energy strategy, Fifth Third purchased renewable energy certificates, known as RECs, to offset our energy consumption. In 2017, Fifth Third set a goal to purchase 100% renewable power, a goal we achieved in 2019 with the opening of the 80 MWac/120 MWdc Aulander Holloman solar facility. This project was facilitated through a virtual power purchase agreement signed by the Bank. The PPA’s March 2018 signing facilitated the construction of this solar field by guaranteeing that Fifth Third would purchase all of the electricity generated at an agreed price, thereby enabling the developer to secure funding and complete the project. In return for guaranteeing to purchase the energy produced, Fifth Third receives all the RECs generated by the project.*

Reducing Our Energy Use

We have taken significant steps to reduce our energy use, and achieve our goal by 2022 of a 25% reduction. We made improvements in space utilization and in the sustainability of new construction, renovation and facility-related operations and maintenance practices, including adding advanced building control technology to more than 400 locations in the past three years. These controls help us monitor and manage our largest category of energy use (heating and cooling). We used third-party analytics partners to assess the performance at each location and identify opportunities for optimization.

To gain deeper insight into our energy usage across our footprint, we have begun benchmarking properties throughout the U.S. Environmental Protection Agency’s Portfolio Manager tool. In doing so, we identified many locations that qualified for ENERGY STAR® certification and have had 63 locations Energy Star certified by a third party.

*Although we intended to retire the RECs from this project toward our 100% renewable goal, in 2020 we began swapping these RECs with other Green-E certified RECs from other renewable energy projects in the U.S. that were retired towards our 100% renewable goal. **Source: U.S. Environmental Protection Agency, Greenhouse Gas Equivalencies Calculator (last updated February 2021).