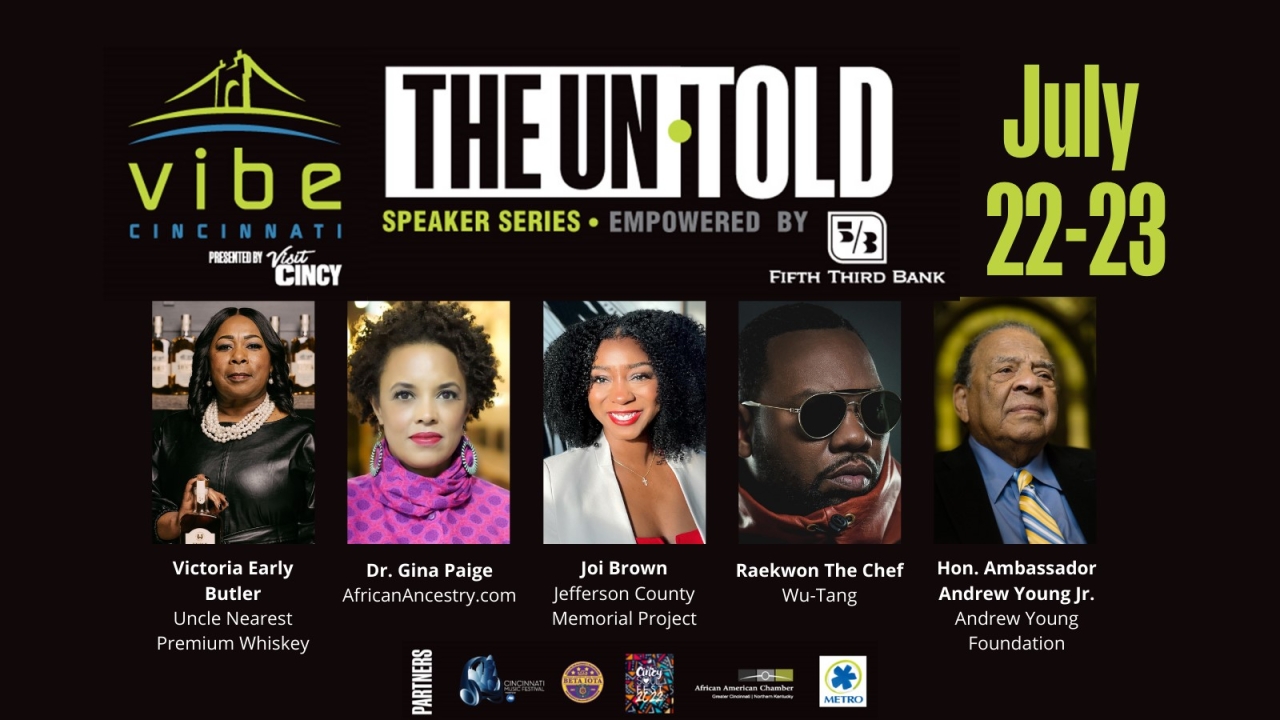 CINCINNATI, June 13, 2022 /CSRwire/ – Politician, diplomat, and activist Andrew J. Young Jr. is among those scheduled to speak in July at the inaugural Un-Told Speaker Series. The program, presented through a collaboration between Fifth Third Bank and Visit Cincy, will focus on stories of diversity and empowerment from nationally acclaimed speakers.

Speaker series events will take place July 22-23 to coincide with the return of the Cincinnati Music Festival, already one of the region’s largest cultural celebrations and tourism draws.

“Diversity, equity and inclusion are integral to how we connect our residents and our community to the visitors who travel here,” said Julie Calvert, president & CEO of Visit Cincy. “The Un-Told Speaker Series presents influential voices discussing important topics that will inform, engage and connect us in powerful ways. The more we expand diverse and inclusive dialogue in our region, the more we deliver on our mission to create a destination that’s welcoming to all.”

“Fifth Third Bank is proud to join with Visit Cincy’s Vibe Cincinnati platform to launch the Un-Told Speaker Series,” said Kala Gibson, Fifth Third’s chief corporate responsibility officer. “This is an incredible opportunity to hear and learn from cultural icons who have helped shape our communities, and to benefit from the power and influence of storytelling. We are honored to support diverse opportunities such as this for Greater Cincinnati residents and visitors to engage and cultivate new ideas.”

The Un-Told Speaker Series will take place at venues in Cincinnati and Northern Kentucky. Admission will be free with registration thanks to the Fifth Third partnership. Speakers are to include:

A study commissioned by the Convention & Visitors Bureau, now Visit Cincy, concluded that the Cincinnati Music Festival, presented by P&G, has an annual economic impact of $107.5 million. Additional events that complement the weekend include Cincy Soul at Fountain Square and the Queen City Foundation 5K. This year, the Cincinnati Black Music Walk of Fame at The Banks will also be dedicated during the festival weekend.

About Fifth Third
Fifth Third Bancorp is a diversified financial services company headquartered in Cincinnati, Ohio, and the indirect parent company of Fifth Third Bank, National Association, a federally chartered institution. As of March 31, 2022, the Company had $211 billion in assets and operates 1,079 full-service Banking Centers, and 2,201 Fifth Third branded ATMs in Ohio, Kentucky, Indiana, Michigan, Illinois, Florida, Tennessee, West Virginia, Georgia, North Carolina and South Carolina. In total, Fifth Third provides its customers with access to approximately 54,000 fee-free ATMs across the United States. Fifth Third operates four main businesses: Commercial Banking, Branch Banking, Consumer Lending, and Wealth & Asset Management. Fifth Third is among the largest money managers in the Midwest and, as of March 31, 2022, had $549 billion in assets under care, of which it managed $61 billion for individuals, corporations and not-for-profit organizations through its Trust and Registered Investment Advisory businesses. Investor information and press releases can be viewed at www.53.com. Fifth Third’s common stock is traded on the NASDAQ® Global Select Market under the symbol “FITB.”