From Hitchcock High to the NFL: I Am Michael Sam

From Hitchcock High to the NFL: I Am Michael Sam 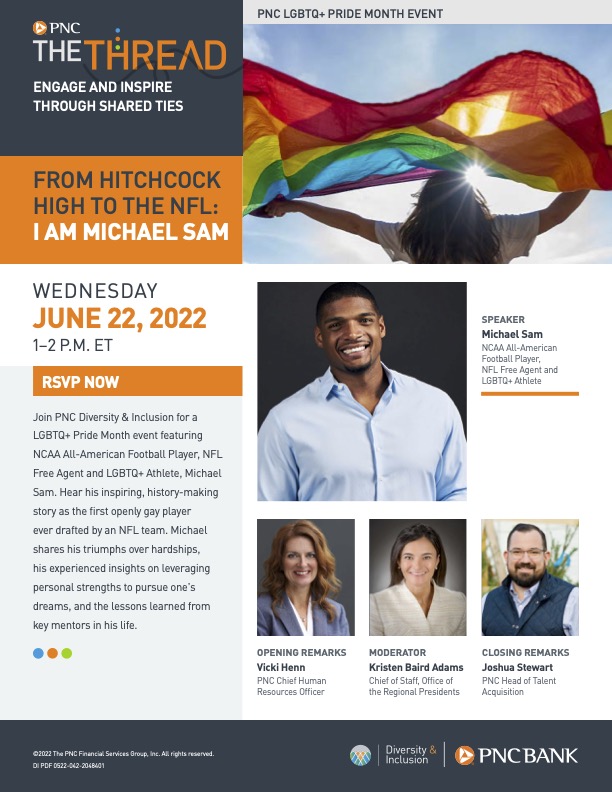 Vicki Henn is executive vice president and chief human resources officer for The PNC Financial Services Group. Henn serves on the board of the PNC Foundation, is a member of PNC’s Corporate Diversity Council, and is the executive sponsor of the PNC Multicultural Employee Business Resource Group.

In the community, Henn serves on the board of the Pittsburgh Civic Light Opera. Henn holds a Bachelor of Arts degree in Communications from Fairleigh Dickinson University, as well as a J.D. from Seton Hall University School of Law.

A University of Missouri football star primed for an early round pick in the 2014 NFL draft, Michael Sam’s talents on the field were nearly sidelined when he came out as gay during an ESPN interview. While his revelation sent shockwaves through the sports world and resulted in a last round pick by the St. Louis Rams, Michael emerged as a powerful and prominent icon for inclusion, a pioneer for the LGBTQ+ community, and an exemplar of the resilience and tenacity of the human spirit. Among his many career accolades, Michael was awarded ESPN’s Arthur Ashe Courage Award at the 2014 ESPYs. He is currently an NFL free agent

Revered for his unwavering courage, graciousness and fortitude, Michael inspires with his personal journey of triumph over intense adversity. Authentic and heartfelt on the stage, his candor empowers audiences to overcome their own impediments to self-truth, love and acceptance.

Kristen Baird Adams is senior vice president and chief of staff of PNC Bank’s Office of the Regional Presidents, through which PNC and its regional presidents (RPs) deliver the company’s national Main Street bank model across more than 50 markets coast to coast. In this role, Baird Adams leads strategic initiatives, budgeting and operations; provides counsel and support to PNC’s RPs; and is accountable for driving internal cross-functional team partnerships that are critical to consistent delivery of that model. She also oversees PNC’s sponsorship and Women’s Business Development teams; and serves on the PNC Foundation board of directors and PNC’s Corporate Diversity Council.

An ardent advocate for Diversity Equity and Inclusion, Joshua served as the founding President of PNC Proud the LGBTQ+ Employee Business Resource Group at PNC Bank. Josh is a co-author of the Forté Foundation's Men As Allies tool kit training program, leads PNC’s Men As Allies program and provides coaching to organizations facilitating the program around the globe. Joshua is a board director at various organizations including The Consortium for Public Education, the Forte Foundation and Partner 4 Work. In addition, Joshua is a member of the Gartner’s’ Talent Management Advisory Board, and the employer advisory board at the National Technical Institute of the Deaf.

Joshua earned a B.A. in Communications from the University of Pittsburgh School of Arts and Sciences and holds a certificate in Diversity Management from Cornell University.