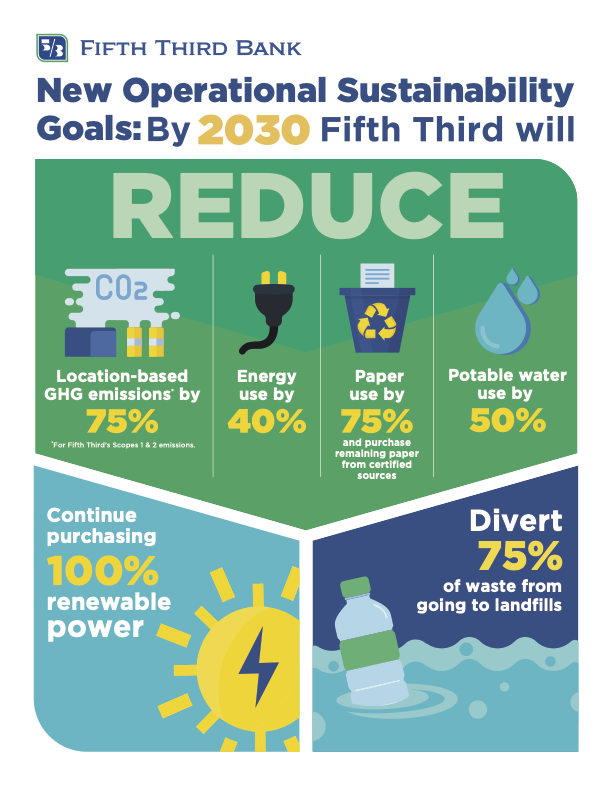 CINCINNATI, May 10, 2022 /CSRwire/ - Fifth Third today announced six new operational sustainability targets to be achieved by 2030. These targets build upon the Bank’s initial five goals set in 2017, which established the foundation for Fifth Third to reduce the environmental impact in its own operations. The 2017 goals were to purchase 100% renewable power and to reduce its energy use, greenhouse gas emissions, water use and waste sent to landfills by 2022.

Fifth Third’s new and enhanced operational sustainability targets for 2030 are:

Since 2014, Fifth Third has reduced its location-based Scope 1 and Scope 2 emissions by more than 50%. Fifth Third has been carbon neutral for these emissions since 2020 with the purchase of 100% renewable power and verified carbon offsets for the remaining emissions.

In addition to announcing these new targets, Fifth Third announces the establishment of a Sustainability Office with the appointment of Mike Faillo as chief sustainability officer. As CSO, Faillo will lead the office and will lead Fifth Third’s comprehensive environmental, social and governance strategy, which includes the Bank’s climate strategy and sustainable finance initiatives, as well as social and governance reporting. This includes working with the lines of business to develop financial solutions and drive innovation to ensure the transition to a sustainable and inclusive economy.

“The creation of a sustainability office under the leadership of Mike Faillo demonstrates Fifth Third’s commitment to drive progress toward a sustainable, inclusive and healthy environment for our customers and communities,” said Kala Gibson, executive vice president and chief corporate responsibility officer. “We recognize the important role that the financial sector has in making necessary changes to adapt to a changing planet and create more resilient communities.”

Faillo began his career at Fifth Third in 2015 and most recently served in Investor Relations as the director of ESG reporting and analytics. Since 2019, Faillo has led the Bank’s ESG strategy and reporting and serves as chair of the ESG Committee.

Faillo said, “Fifth Third has aggressive plans and targets for leading the transition to a sustainable future and addressing climate change. A key part of our strategy is reducing our own impact on the environment. Our new operational sustainability targets, which we intend to achieve by 2030, build upon the success of our first set of environmental goals announced in 2017 and sets aggressive targets for the future. These targets, along with our other key actions, are essential to our sustainability objectives.”

In addition to these actions, Fifth Third has taken the following steps in recent months:

Fifth Third is committed to transparency in its climate journey and climate-related disclosures, including:

About Fifth Third
Fifth Third Bancorp is a diversified financial services company headquartered in Cincinnati, Ohio, and the indirect parent company of Fifth Third Bank, National Association, a federally chartered institution. As of March 31, 2022, the Company had $211 billion in assets and operates 1,079 full-service Banking Centers, and 2,201 Fifth Third branded ATMs in Ohio, Kentucky, Indiana, Michigan, Illinois, Florida, Tennessee, West Virginia, Georgia, North Carolina and South Carolina. In total, Fifth Third provides its customers with access to approximately 54,000 fee-free ATMs across the United States. Fifth Third operates four main businesses: Commercial Banking, Branch Banking, Consumer Lending, and Wealth & Asset Management. Fifth Third is among the largest money managers in the Midwest and, as of March 31, 2022, had $549 billion in assets under care, of which it managed $61 billion for individuals, corporations and not-for-profit organizations through its Trust and Registered Investment Advisory businesses. Investor information and press releases can be viewed at www.53.com. Fifth Third’s common stock is traded on the NASDAQ® Global Select Market under the symbol “FITB.”