The Atlantic, Artist Glenn Kaino, and Superblue Announce A Forest for the Trees, an Immersive Show Opening May 13 in Los Angeles

A Forest for the Trees, sponsored by Mastercard®, takes visitors on a magical journey through a forest, hidden inside a 28,000-square-foot space in downtown Los Angeles

The Atlantic, Artist Glenn Kaino, and Superblue Announce A Forest for the Trees, an Immersive Show Opening May 13 in Los Angeles

A Forest for the Trees, sponsored by Mastercard®, takes visitors on a magical journey through a forest, hidden inside a 28,000-square-foot space in downtown Los Angeles 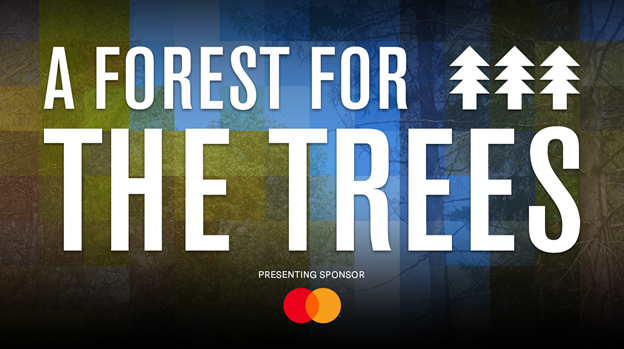 The Atlantic, artist Glenn Kaino, and Superblue announce today the debut of A Forest for the Trees, an ambitious immersive show created and directed by visionary artist Glenn Kaino that is designed to inspire audiences to reimagine their relationship with the natural world. Opening May 13 and sponsored by Mastercard®, A Forest for the Trees will take visitors on an hour-long journey through a surreal forest of magic, music, and wonder—with animatronic performing trees, illusions of fire, and interactive sound sculptures, all hidden within a 28,000-square-foot space in downtown Los Angeles. Responding to The Atlantic’s extensive writings that have shaped American attitudes toward nature for more than a century, the show is directed by Kaino working alongside Grammy-winning producer/musician David Sitek, as part of the duo’s new band project, HIGH SEAS.

A presale for Mastercard cardholders is open now*, with general admission tickets available for purchase beginning May 2. Mastercard cardholders also receive exclusive benefits, including 10% off tickets and a one-month digital trial subscription to The Atlantic. Additionally, in support of Mastercard’s commitment to restore 100 million trees by 2025 through the Priceless Planet Coalition, Conservation International will plant a tree for every ticket sold to the show. This is a limited-time experience for all ages.

A Forest for the Trees is conceived as a journey through a forest and asks audiences to reflect on humanity’s relationship with nature, our memory of the past, and our optimism about the future. The show is steeped in histories inspired by the people closest to the forests and nearby Los Angeles neighborhoods: from an immersive interactive fire illusion referencing the controlled burns that are central to Native forest stewardship, to the symbolic resurrection of an iconic 144-year-old tree from Olvera Street felled by a recent storm. A Forest for the Trees will share transformative stories through spectacular illusions, bringing together art, music, and story in surprising new ways to create an experience filled with meaning and purpose.

A Forest for the Trees is created and directed by internationally renowned, Los Angeles–based artist Glenn Kaino, whose immersive art installation In the Light of a Shadow is currently on view at MASS MoCA. The show is inspired by The Atlantic’s editorial series “Who Owns America’s Wilderness?,” which launched in 2021 with the cover story “Return the National Parks to the Tribes” written by David Treuer and edited by Ross Andersen, and by The Atlantic’s 165 years of writing by some of the most influential voices on America’s natural spaces. That tradition began with the work of Ralph Waldo Emerson, a co-founder of the magazine, and continued through the end of the 19th century, when John Muir made his case for the national parks in The Atlantic.

Over the past year, Kaino has been working alongside an interdisciplinary collective of artists, musicians, tribal leaders, and environmentalists to bring A Forest for the Trees to life. Kaino and his team also draw from more than a decade of deep research into the field of magic, including the production of the hit off-broadway show and film In & Of Itself. Vance Garrett (Sleep No More, Museum of Ice Cream) serves as executive producer, bringing his deep background in immersive theater to the show, which is organized in collaboration with Superblue’s senior curator Kathleen Forde.

“I have worked my entire career to build the tools and relationships that have allowed me to embark upon a project of this unprecedented scale and ambition, both conceptually and formally,” Kaino said. “Intergenerational problems of this magnitude require new thinking and new models about how we bring together traditional ecological knowledge and advanced technology. It is my hope that this show can provide inspiration into how to connect and contribute to some of the most pressing issues of our time, in a dynamic and exciting way that our audience can take home with them.”

Among the collaborators and creators involved with A Forest for the Trees:

The project is developed and executive produced by Atlantic Ventures, a business development group at The Atlantic that creates large-scale initiatives grounded in The Atlantic’s most consequential journalism.

“When The Atlantic published the profound Wilderness project in 2021, we knew this was the opportunity to explore a completely new arena for expressing the force of an Atlantic idea,” said The Atlantic’s Brad Girson, executive director of Atlantic Ventures and executive producer of the show. “In Glenn Kaino and Kathleen Forde, we found creative partners whose ambition, spirit, and experience matched our own. We are very excited about this work and the way it represents a new approach to business and brand development in media.”

“Glenn Kaino is a visionary artist, whose work is emblematic of the way artists can change how we see the world and each other. Superblue’s partnership with The Atlantic reflects our shared commitment to creating platforms for transformative projects such as this one,” said Mollie Dent-Brocklehurst, co-founder and CEO, Superblue.

“A Forest for the Trees is a brilliant reflection of several of Mastercard’s commitments—one to protecting our planet and forest restoration through the Priceless Planet Coalition and another, to leading the marketing industry in creating Priceless experiences that bring people closer to their passions,” said Rustom Dastoor, EVP, Marketing and Communications, North America, Mastercard. “We’re thrilled to have such incredible partners in Glenn Kaino and The Atlantic, to help give people a way to enjoy themselves while simultaneously giving back to a cause they care about.”

Bill Tripp, Director of the Department of Natural Resources for the Karuk Tribe, and a consultant on the project, added “It has been an exciting endeavor helping to inform A Forest for the Trees, which aims to inspire understanding of how fire exclusion has impacted the Karuk people and the natural environment. I am thrilled that these issues will be explored in such an unprecedented manner through this show and brought to life in such interesting ways for a completely new audience.”

A Forest for the Trees

DATES
Opening Friday, May 13, for a limited run through summer 2022

Since 1857, The Atlantic has been a magazine of ideas—a home to the best writers and boldest minds, who bring clarity and original thinking to the most important issues of our time. Through our journalism, we aim to help our readers better understand the world and its possibilities, as they navigate the complexities of daily life. Record audiences and numbers of subscribers have turned to The Atlantic’s exacting coverage of the pandemic and its consequences, of threats to global democracy, and issues of race and inequity. Jeffrey Goldberg is The Atlantic’s editor in chief; Nick Thompson is the CEO. The Atlantic earned the top honor for magazines, General Excellence, at the 2022 National Magazine Awards.

Glenn Kaino is a conceptual artist and award-winning creator. He has had exhibitions at museums around the world, and his work is included in the collections of the Los Angeles County Museum of Art, the Hammer Museum, and the Smithsonian American Art Museum, among many others. In 2013 he was selected by the U.S Department of State to represent the United States in the 13th Cairo Biennale. He most recently co-directed With Drawn Arms, a film about his collaboration with activist/athlete Tommie Smith on Starz, and produced both the off-broadway and film versions of the Hulu hit special In & Of Itself. Kaino is the co-curator of the Hammer Museum’s forthcoming Pacific Standard Time exhibition Breath(e): Toward Climate and Social Justice; and the recipient of the two largest public-art grants in the history of Los Angeles for commissions at the city’s 6th Street Viaduct and MTA LAX Metro Connector. Kaino is also a digital pioneer who has led major digital brands such as the Oprah Winfrey Network, Napster, and Universal Music Group/Farmclub.

Superblue is a ground-breaking new enterprise dedicated to supporting artists in realizing their most ambitious visions and engaging audiences with experiential art. Its network of artists encompasses the leading practitioners of experiential art, whose practices catalyze engagement with the most pressing issues of our time and generate new perspectives on our world.

Through its experiential art centers, which are specifically designed for presenting large-scale, immersive art installations, Superblue provides artists with expanded opportunities to transport audiences to the new worlds they create. In the coming years, Superblue will open new experiential centers across the U.S. and internationally and is developing augmented- and virtual- reality platforms for artists who are exploring our rapidly evolving relationship with the digital realm.

Since landing atop NME’s “Future 50” list, TV on the Radio founder David Andrew Sitek has produced Jane’s Addiction, Kelis, Weezer, Scarlett Johansson, Pussy Riot, Preservation Hall Jazz Band, Group Love, Karen O, and Willie Nelson, and collaborated with Blondie, Jay-Z, Run the Jewels, David Byrne, and Solange, landing a Grammy with Jay-Z & Beyoncé’s The Carters. He’s arguably the most versatile and indefinable musical talent of his generation, which, naturally, led to something as ambitious as A Forest for the Trees.

Before seeding the early 2000s with a sound and vision soon borrowed/bought/sold as “Brooklyn Made,” Sitek trained in the visual arts, as a painter, photographer, and filmmaker. His first collaboration with Glenn Kaino, In the Light of a Shadow, inhabits a space of equally grand scale at MASS MoCA until September of this year.

Vance Garrett is a pioneering experiential and creative producer, whose work in immersive and theatrical events has defined the cultural zeitgeist for nearly two decades. Garrett’s experience overseeing groundbreaking projects like Sleep No More at the McKittrick Hotel, 29Rooms, and the Museum of Ice Cream is rooted in his understanding of theatrical storytelling and an unrelenting commitment to creating new, multisensory experiences.

Atlantic Ventures is a business development group at The Atlantic that works across the organization and with world-class creative and business partners to develop cultural projects rooted in the magazine’s most consequential journalism.