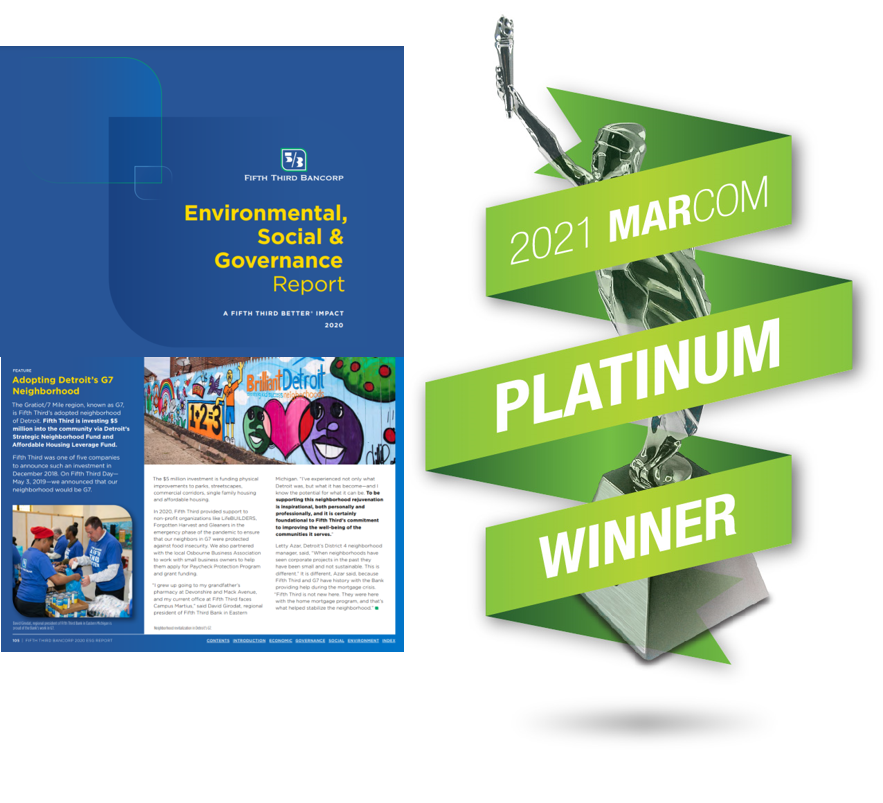 The Marcom Awards is an annual, international competition that honors excellence in marketing and communication. Since its inception in 2004, MarCom has evolved into one of the largest, most-respected creative competitions in the world. Each year, about 6,500 print and digital entries are submitted from dozens of countries. MarCom is administered by the Association of Marketing and Communication Professionals.

“This recognition of our 2020 ESG Report speaks volumes not only about the quality and workmanship that went into the report itself by our Communications, Investor Relations and Marketing teams, but also speaks to our ESG actions, which have become an integral part of who we are as a company,” said Greg D. Carmichael, chairman and CEO of Fifth Third Bank. “Collectively, all of us at Fifth Third are focused on doing well by doing good and delivering long-term sustainable value to all of our stakeholders.”

Fifth Third’s 2020 ESG Report featured key ESG actions, including the Bank’s becoming the first regional U.S. commercial bank to achieve carbon neutrality for its Scope 1, Scope 2 and Scope 3 business travel emissions; joining the Partnership for Carbon Accounting Financials and the Ceres Company Network; delivering $41.6 billion under its five-year Community Commitment; announcing a $2.8 billion Accelerating Racial Equity, Equality and Inclusion initiative, and its $75.4 million spending with diverse suppliers; and being named again by Ethisphere as one of the world’s most ethical companies and reporting 40% diversity among the Company’s directors by ethnicity or gender.

Since the publication of the 2020 report, Greg Carmichael has been named Responsible CEO of the Year for Community Impact by 3BL Media. In addition, Fifth Third Bancorp settled the issuance of its inaugural $500 million Green Bond, appointed its first climate risk officer, and announced a $180 million Neighborhood Investment Program, through which Fifth Third will invest up to $20 million in nine neighborhoods across its 11-state footprint. More about the Bank’s ESG program is available online.

Fifth Third Bancorp is a diversified financial services company headquartered in Cincinnati, Ohio, and the indirect parent company of Fifth Third Bank, National Association, a federally chartered institution. As of Sept. 30, 2021, Fifth Third had $208 billion in assets and operated 1,100 full-service banking centers and 2,336 branded ATMs in Ohio, Kentucky, Indiana, Michigan, Illinois, Florida, Tennessee, West Virginia, Georgia, North Carolina and South Carolina. In total, Fifth Third provides its customers with access to approximately 52,000 fee-free ATMs across the United States. Fifth Third operates four main businesses: Commercial Banking, Branch Banking, Consumer Lending, and Wealth & Asset Management. Fifth Third is among the largest money managers in the Midwest and, as of Sept. 30, 2021, had $541 billion in assets under care, of which it managed $61 billion for individuals, corporations and not-for-profit organizations through its Trust and Registered Investment Advisory businesses. Investor information and press releases can be viewed at www.53.com. Fifth Third’s common stock is traded on the Nasdaq® Global Select Market under the symbol “FITB.”