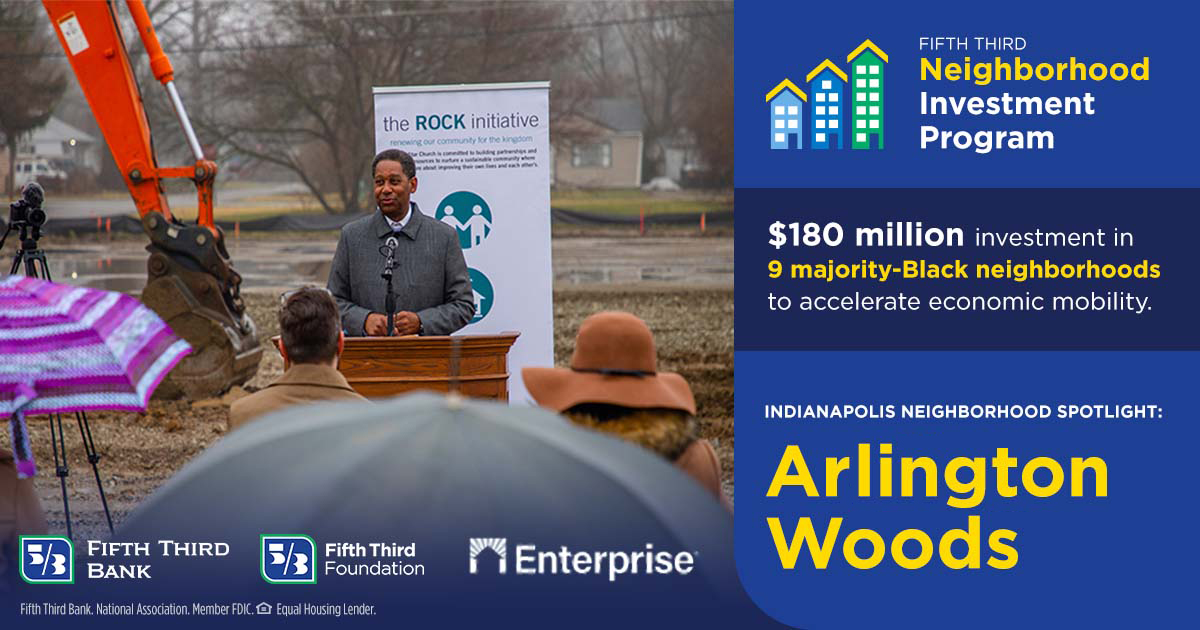 INDIANAPOLIS, November 4, 2021 /CSRwire/ – Fifth Third and Enterprise Community Partners today announced the establishment of a neighborhood program to continue support for the revitalize of the Arlington Woods community. The Neighborhood Investment Program will focus over three years on the JEWEL Human Services Corporation and cross-sector collaborations as part of the ROCK Initiative.

“This opportunity allows Fifth Third to invest in a unique way by taking a thoughtfully structured approach to solve real-world systemic issues,” said Mike Ash, Regional Fifth Third president. “This program goes beyond infusing capital into Arlington Woods. We are working to make a significant impact by targeting investments in this specific area, collaborating with JEWEL Human Services and their leading organizations, driving change through affordable housing and best-in-class education.”

Fifth Third is collaborating on the initiative with Enterprise Community Partners, a national nonprofit that exists to make a good home possible for the millions of families without one. Together, they managed a  criteria-based, invitation-only application process to select nine majority-Black neighborhoods that have seen a sustained period of disinvestment. Arlington Woods was one of the locations selected. Enterprise will provide technical assistance to support each neighborhood in developing and implementing a plan tailored to the unique challenges it faces. Enterprise will then assist with assessing the plan’s effectiveness at improving the economic well-being of residents and small locally owned businesses. Successful outcomes will include investments in small businesses, homeownership and workforce development to create successful outcomes such as increased employment, economic stability and growth.

“We are committed to providing strategic insight that will help establish an upward trajectory for communities that have historically had limited investment opportunities,” said Nashelle Frazier, Regional Community and Economic Development Manager. “This is more than giving Bank dollars and programs to JEWEL Human Services, we are coming alongside their vision of a neighborhood that meets its members where they are and provides the resources to get them to where they want to be. Through the Neighborhood Investment Program, we’ll connect comprehensive assistance to build lasting relationships and develop a foundation of equity to help eliminate racial disparities and level the playing field.”

Fifth Third intends to commit up to $20 million in lending, investments and philanthropic support, including grants from the Fifth Third Foundation to JEWEL Human Services. A combination of capital, products and services will be invested into small businesses, mortgages, philanthropic efforts, and neighborhood revitalization loans and investments.

JEWEL Human Services was invited to apply for the program based on its ability to meet specific criteria, including collaborating with the neighborhood’s Black residents, existing civic infrastructure in the neighborhood and its capability to manage equitable investment and wealth-building opportunities. The program’s funds will cultivate investments and resources from additional stakeholders to support the economic mobility of low- to moderate-income residents in the target neighborhoods.

Anthony Murdock, executive administrator of JEWEL Human Services, Inc. said their organization will use the funds to continue Phase II of the Rock Initiative. The plan includes a new education center, as well as multi-family affordable housing, new 2-story homes, a single-story retail space, and a public garden and green space. “Eastern Star Church through the ROCK Initiative is compelled by our mission of Evangelism and Discipleship and faith in God to work to improve the quality of life in the Arlington Woods neighborhood. We are thankful for the leadership of Jeffrey A. Johnson, Sr., Senior Pastor and CEO of Eastern Star Church, church council, our dedicated staff and continued sacrifice of our parishioners, volunteers and partners such as Fifth Third Bank and their Neighborhood Investment program for their commitment to join with us in transformative work for this community,” shares Murdock.

The Neighborhood Investment Program is part of Fifth Third’s $2.8 billion commitment that will provide $2.2 billion in lending, $500 million in investments, $60 million in financial accessibility and $40 million in philanthropy from the Fifth Third Foundation as part of Fifth Third’s Accelerating Racial Equality, Equity and Inclusion initiative. The commitment is focused on four strategic pillars that directly impact customers and communities with targeted outcomes enabling the Bank to track progress and measure success in the areas of strategic investments, access to capital, financial inclusion and education, and social justice and advocacy. This program also aligns with Enterprise’s new strategic plan and three central goals: to increase housing supply, advance racial equity and build resilience and upward mobility.