COLUMBUS, October 19, 2021 /CSRwire/ - Fifth Third and Enterprise Community Partners today announced the establishment of a neighborhood program to support and continue revitalization efforts on the Near East Side of Columbus. The Neighborhood Investment Program will focus over three years on the PACT geography and cross-sector collaborations. PACT, which stands for Partners Achieving Community Transformation, is a partnership initiated in 2010 by the City of Columbus, The Ohio State University, the Columbus Metropolitan Housing Authority (CMHA) and Near East Side stakeholders. The Near East Side PACT Neighborhood, which is bounded by Woodland Ave to the east; Broad St to the South; I-71 to the west; and I-670 to the north, was one of the locations selected.

“Fifth Third is eager to continue our existing collaboration with one of the city’s most historic neighborhoods, the Near East Side, and to invest in a unique way by taking a thoughtfully structured approach to solve real-world systemic issues,” said Regional Fifth Third Bank president, Francie Henry. “We have partnered with this neighborhood since 2015 and during the past six years, have made investments in several efforts including the United Way of Central Ohio Neighborhood Leadership Academy, Columbus Urban League, Minority Business Assistance Center, and PACT Exterior Home Repair Program.  Now, we are excited to continue our efforts in an even bigger and magnified way. PACT’s mission is ‘Honoring our Heritage and Building our Future’ and we are pleased to continue long-term support.”

Fifth Third is collaborating on the initiative with Enterprise Community Partners, a national nonprofit that exists to make a good home possible for the millions of families without one. Together, they managed a criteria-based, invitation-only application process to select nine majority Black neighborhoods that have seen a sustained period of disinvestment.  The Near East Side PACT Neighborhood was one of the locations selected. Enterprise will provide technical assistance to support each neighborhood in developing and implementing a plan tailored to the unique challenges it faces. Enterprise will then assist with assessing the plan’s effectiveness at improving the economic well-being of residents and small locally owned businesses. Successful outcomes will include investments in small businesses, homeownership and workforce development to create successful outcomes such as increased employment, economic stability and growth. 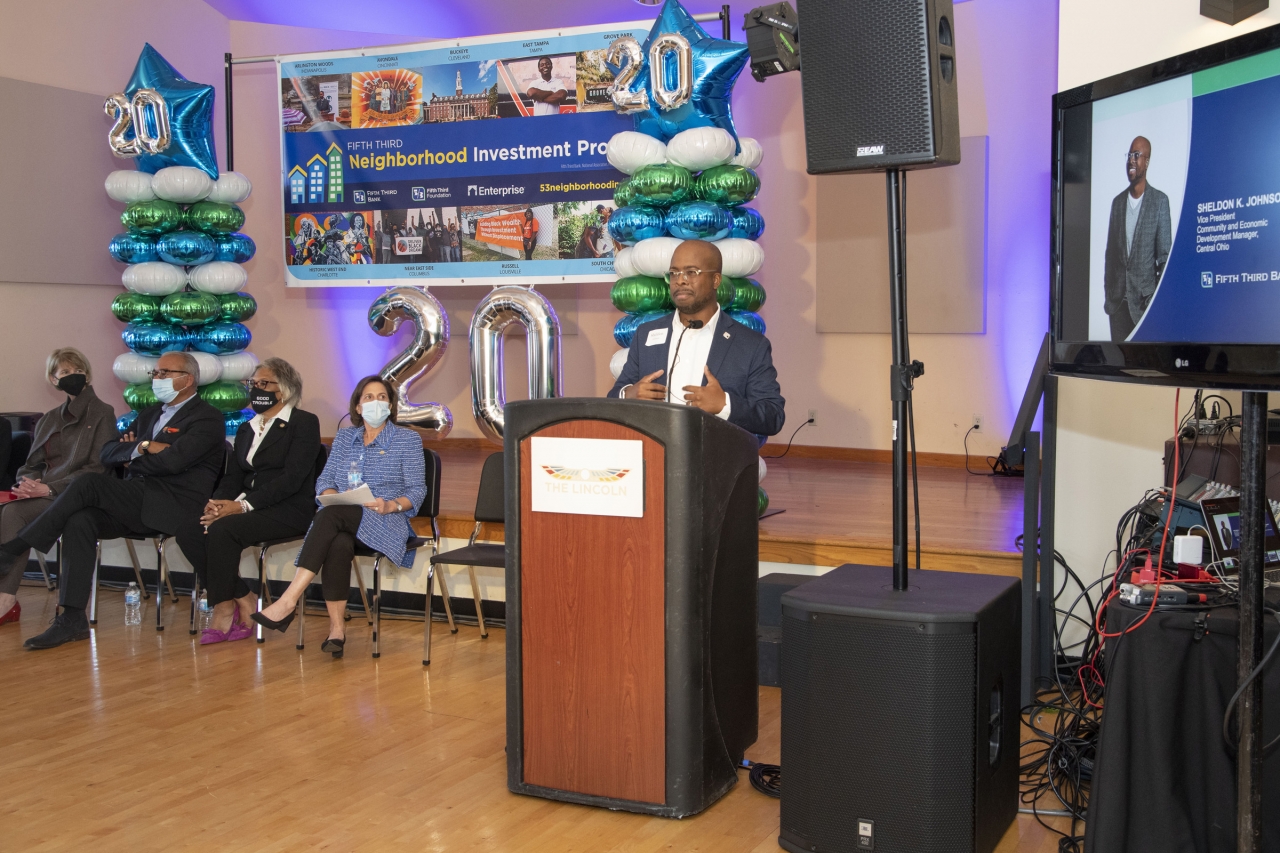 “This investment represents our commitment to holistic community development,” said Fifth Third Central Ohio Community & Economic Development Manager, Sheldon K. Johnson. “Through the Neighborhood Investment Program we are focused on contributing to sustainable solutions that address racial disparities in health and wealth. By collaborating with PACT and Enterprise and other community stakeholders we can build upon the foundation of work that’s already been done and have some transformative impact in this historic community.”

Fifth Third intends to commit up to $20 million in lending, investments and philanthropic support, including grants from the Fifth Third Foundation to the Near East Side PACT Neighborhood. A combination of capital, products and services will be invested into small businesses, mortgages, philanthropic efforts, and neighborhood revitalization loans and investments.

The Near East Side PACT Neighborhood was invited to apply for the program based on its ability to meet specific criteria, including collaborating with the neighborhood’s Black residents, existing civic infrastructure in the neighborhood and its capability to manage equitable investment and wealth-building opportunities. The program’s funds will cultivate investments and resources from additional stakeholders to support the economic mobility of low- to moderate-income residents in the identified neighborhoods.

Elizabeth Seely, founding board member and current chair of the PACT Board of Directors, said PACT will use the funds to further advance initiatives from PACT’s Blueprint for Community Investment including safe and affordable housing, health, education, and employment opportunities. Potential investments in the program include funding the development of new black-owned businesses, supporting public art creation, providing down payment support for residents’ middle-income and ladder-up housing opportunities to build generational wealth, expanding access to health services, and creating financial education, literacy, and savings programs for the area’s young people’s future dreams.  “Infusing good development practices and principles interwoven with community engagement, culture, and legacy has been our vision and our dream. The expertise and investment of Fifth Third – combined with the knowledge base of Enterprise – make this an exceptionally critical moment for our community. And we’re ready - we’re just poised to leverage it,” said Seely.