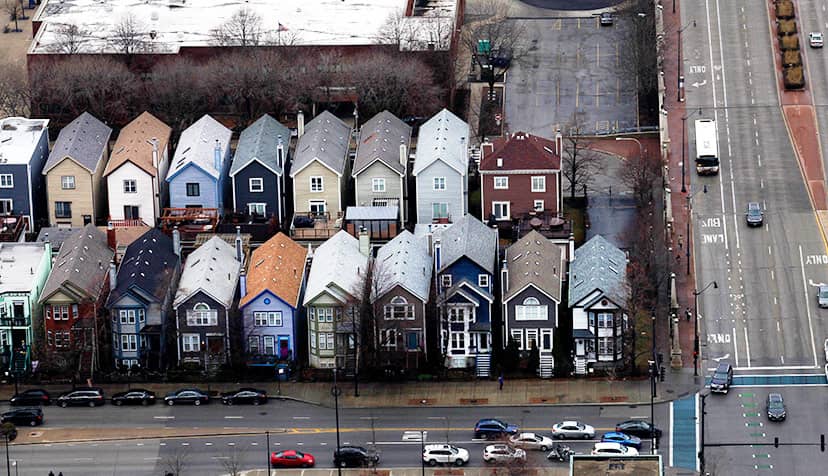 Originally published by the Mastercard Center for Inclusive Growth

The West and South sides of Chicago are home to some of the city’s most marginalized families, but also to some of the most deeply rooted communities, rich in culture and history. 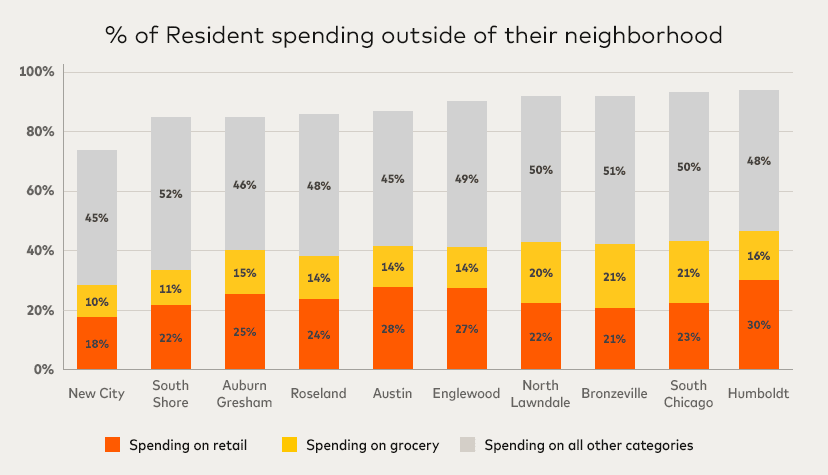 But lack of investment in those neighborhoods means residents spend a large part of their daily life on a bus, bike or in a car shopping, paying bills and picking up their kids from care—all of it far from home. What might take a middle-class family with two cars an hour to run a few errands takes a low-income family four.

The costs are more than just lost time. It is expensive to be poor. When there are no affordable banking services in the neighborhood, families resort to costlier options such as check-cashing services. When there are no full-service grocery stores, they must pay more for less nutritious foods. When there’s no access to health clinics, residents end up using the emergency room for primary care. 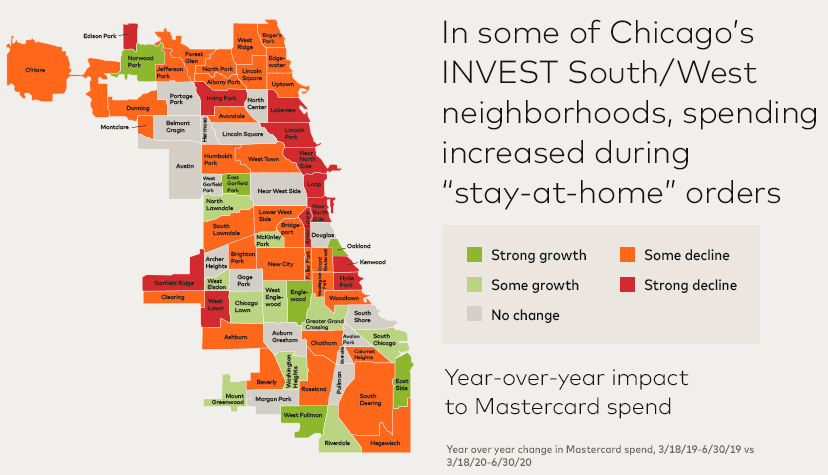 That’s one reason the 15-Minute City movement is taking root. A healthy city, urban planners contend, is one where residents can find everything they need within a 15-minute walk from home.

A new data analysis from the Mastercard Center for Inclusive Growth indicates that residents on Chicago’s South and West sides are far from a 15-minute neighborhood. In fact, up to 86 percent of residents’ spending is done outside their neighborhood. 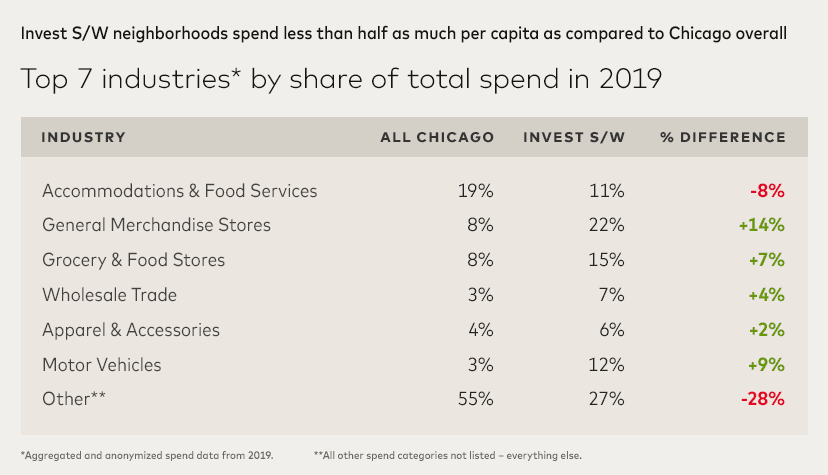 As we learned in previous analyses for Erie, Penn., the Pullman neighborhood in Chicago and New Orleans’ Livable Claiborne Corridor, making the case to investors is easier when there’s data to illuminate the community’s needs and wants. These analyses are a part of the Center’s ongoing commitment to equip leaders with interactive tools and research insights to advance inclusive economies at the local and regional level.

The financial lives of low-income families and their communities are notoriously hard to understand using traditional public datasets, and as a result, investment often goes elsewhere on the false assumption there is no “buying power” in the neighborhood. For investors, the costs are too high to assemble unique data for smaller, off-the-radar cities and communities, Matt Wachter of the Erie Downtown Development Corp., told us last year. It was one reason Erie was overlooked for investment.

Insights based on Mastercard’s anonymized and aggregated spending data help overcome many of these challenges by offering a much more detailed, nearly real-time glimpse into not just what communities spend on, but where. Our data analysis in Erie, for example, identified where downtown commuters were spending their money during the day, which helped city planners draw a $22 million investment in a grocery store, distillery and culinary center in a former food desert. Many of the new stores are women- and minority-owned businesses. 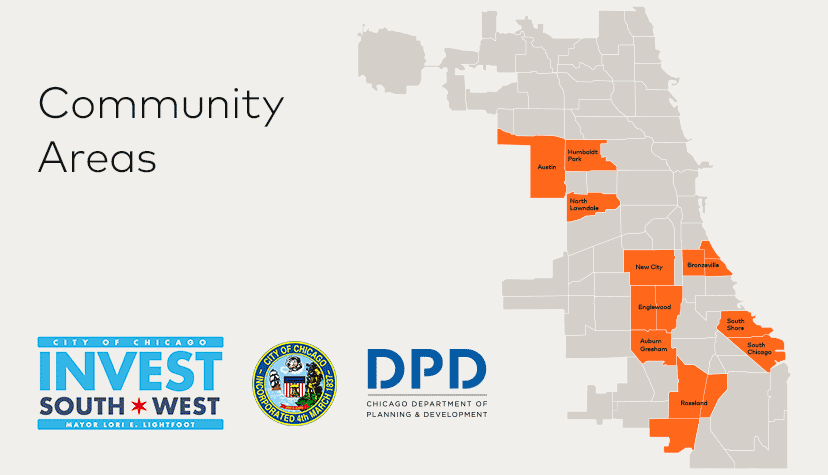 The insights can also help place-based development identify and validate basic and essential services that residents need and want in underserved neighborhoods. As part of the Center’s efforts to advance data science for social impact, a volunteer team of data analysts and consultants collaborated with Chicago’s Department of Planning and Development for a deep dive into consumer spending trends in the 10 neighborhoods that are a part of the city’s Invest South/West initiative.

The city-led initiative is investing $750 million in these largely Black and Latinx low-income neighborhoods to bring needed supports, housing and services as well as to jumpstart private-sector investments.

With input from community and business members, we analyzed spending data before and during the pandemic in each of the community areas, breaking out spending by essential and nonessential goods and services.

A more detailed look at spending in four South/West neighborhoods indicates that savings on auto fuel and other pandemic-affected categories seems to have been diverted to essentials.

Each of the four communities saw a spike in spending on electronics, likely as schools closed and students went online. Chicago Public Schools distributed laptops to students but the need outweighed supplies.  Grocery stores saw a jump as well, particularly in Englewood, where spending rose 61 percent. Many families received a pre-loaded debit card for food from schools in lieu of the free and reduced lunches, which could have contributed to the jump in groceries—as well as pandemic-induced buying. Restaurant spending (“food”) and gas plunged in the meantime, which is to be expected as work-from-home orders went into effect and restaurants closed.

Overall, the analysis suggests that families in the South/West neighborhoods focus their spending on essentials and are leaving their neighborhoods to shop.  The pattern of spending speaks to both demand and the types of stores that could thrive in these neighborhoods.

A better understanding of the financial lives and spending patterns of lower-income families can help public- and private-sector entities help ensure investments meet local needs. By creating more robust neighborhoods, cities can also help lower the cost of living for families and give them back the time lost at great cost to themselves.

Michelle Thompson is a senior data fellow with the Center and associate professor at the University of New Orleans, Department of Planning and Urban Studies; Ed Lee is manager of data science for the Center; and Barbara Ray is a Chicago-based writer who writes about social policy and research. 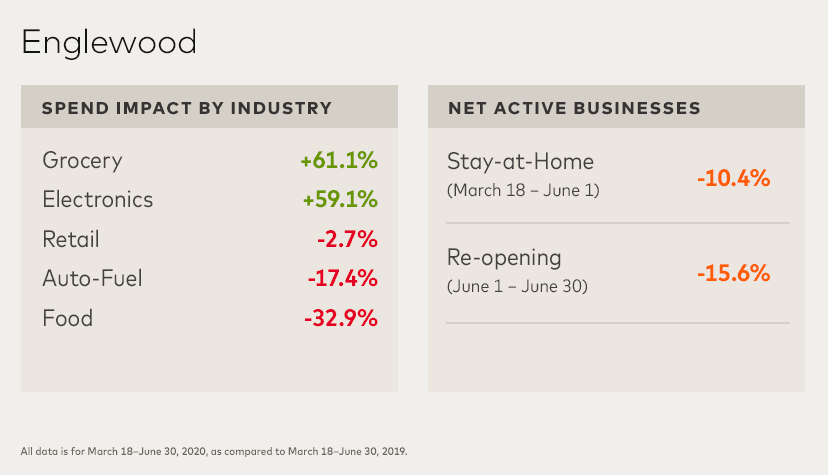 Check out more content from The Mastercard Center for Inclusive Growth