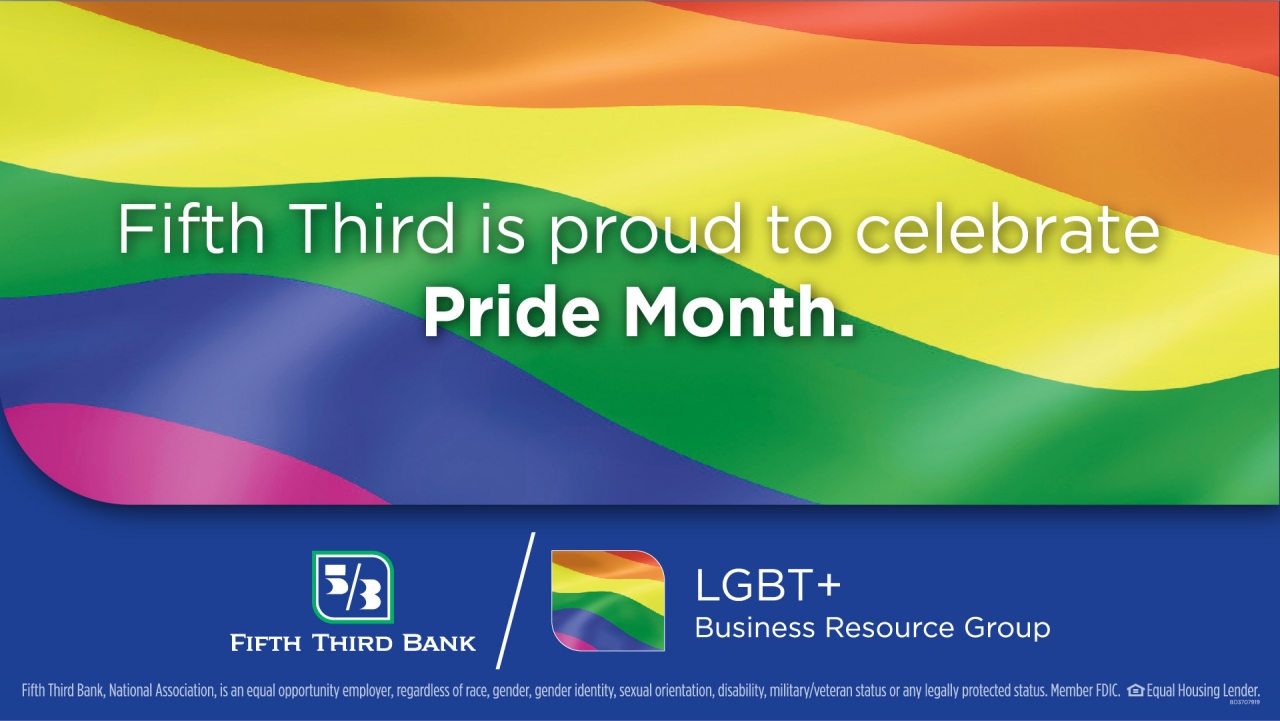 June is the anniversary of the 1969 Stonewall riots in New York City, a tipping point of the gay rights movement in the United States. As part of marking what has become known as Pride Month, four Fifth Third Bank employees share their stories as members and allies of the community.

As a leader of Commercial treasury sales professionals in Indiana, Brandi helps Bank customers’ businesses thrive through the use of our Treasury Management solutions. She also is the executive advocate of the region’s LGBT+ Business Resource Group.

“Encouraging and supporting each other, despite our differences, is what makes the world a better place,” Brandi said. “When we empower and create safe environments for each other, we have the opportunity to learn and grow to form a diverse, cohesive, engaged culture that creates positive and sustainable change.”

While many Pride Month events are still virtual this year, Brandi points out that people still have many opportunities to get involved.

“I encourage everyone to check out just one event to celebrate, learn and appreciate each other, no matter where you live,” Brandi said. “You won’t be disappointed, and our communities will benefit.”

The history of Pride Month inspires Beryl, who leads the LGBT+ committee as part of the Multicultural BRG in South Florida.

“The Stonewall riots became a catalyst for increased awareness and visibility for the LGBT+ community, and it also led multiple marginalized communities – like people of color and women – to band together to fight for equal rights,” Beryl said. “It was because of the combined efforts of these minority communities that the United States began to move toward equality and away from discrimination.”

While there is still a way to go, Pride Month provides a time of visibility for the LGBT+ community and a way for others to show their support and allyship.

“The Bank’s commitment to inclusion and diversity can be felt through the many BRGs across our footprint,” Beryl said. “I challenge and encourage all employees to seek out the BRGs and become members because allyship is vital to acceptance.”

“It’s important that we share our stories with our co-workers and friends,” Tom said. “I started my career at a time when there was shame and isolation in being gay, as well as a fear of losing one’s job. While a lot has changed, we need to light the way for those who are at the beginning of their journeys, whether they are just coming out, transitioning or have a family member who is. Sharing your story and letting people know you support them is so important to creating a better community, culture and place to work.”

Fifth Third’s BRGs are focused on fostering employees, the Bank’s reputation, and a work environment and culture that supports engagement and inclusion. BRGs are open to all Fifth Third employees, whether they’re members of the group’s constituency or allies.

In June, the LGBT+ BRGs across the Bank’s footprint will celebrate Pride in a variety of ways, including scavenger hunts, parades and more. Here is some of what’s in store: