Meet Dr. Marta Karczewicz, the Qualcomm Inventor Who Helped Make It Possible to Stream, Share, and Communicate Over Video 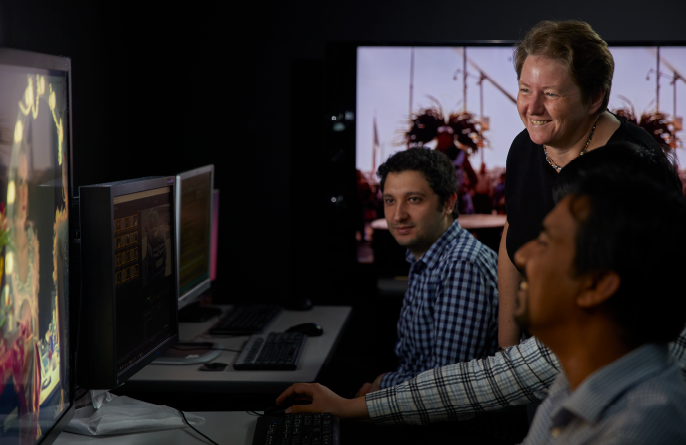 Welcome to Qualcomm Invents. In this series, we’re talking with some of Qualcomm’s most prolific inventors about their work, the impact of their inventions, and their inspiration.

That video you just recorded of your pet, the Zoom call you had earlier with a coworker, and that sitcom you streamed last night — none of those experiences would be possible without Dr. Marta Karczewicz, Vice President of Technology at Qualcomm Technologies, Inc.

Originally from Poland, Marta joined Qualcomm in 2006 and helped revolutionize video compression, inventing the breakthrough techniques that form the backbone of our modern video experiences — from streaming and sharing video to multi-user video conferencing. Her inventions compress raw video data — sometimes by a factor of 1,000 — so it can be delivered quickly and accurately to the end-user without losing any perceivable image quality.

“Raw video data couldn't even be sent if not for these video codecs. Now video is pretty much everywhere,” she said.

Marta’s contribution to the video experiences we know and love today comes not in the form of one single breakthrough, but rather an entire body of inventions. It’s accurate to say she worked on nearly every building block that comprises video codecs at large, and she holds over 500 U.S. patents. Her work hasn’t gone unnoticed: Marta was one of three recipients of the Qualcomm IP excellence Award in 2012, and she was nominated as one of three finalists for the 2019 European Inventor Award in the prestigious “Lifetime Achievement” category.

At Qualcomm Technologies, Marta leads a team of 30 people dedicated to improving multimedia R&D, making breakthroughs as video moves into more categories than ever before. This includes everything from remote education and telemedicine to XR and machine-to-machine communication. To learn more about her invention journey and the impact of her work, we sat down with Marta for a conversation.

Did you always know you wanted to be an inventor? What inspired you early on, and how do you continue to find inspiration?

It's kind of coincidental. Math and physics were pretty much the only subjects I liked in school because they were more about understanding the material and solving the problems than memorizing information. I liked the abstract math and that, very often, there wasn't just one correct proof or solution. That really drew me, and I also turned out to be pretty good at it. In high school, I was one of the winners of the Polish Math Olympiad. So I just like solving problems, and inventions are a product of my work. Still, today, my motivation starts with me questioning everything and challenging myself, asking, ‘can I do this better than it’s been done so far?’

What was the impetus for your work on video codecs? What problem were you trying to solve?

I was trying to transform the design of video compression. And when I started this work, I remember looking at a textbook that suggested a certain method was best, because of the researchers’ assumptions about the data. I thought, ‘seriously? Let me take a look. Are these assumptions correct?’ And I determined I could do better.

With each new generation of video codecs, we basically needed to compress by an additional 40 percent to achieve the same visual quality. But it never happens by modifying just one element of the codec; it always happens by modifying tens if not hundreds of elements. And overall, it’s been an accumulation of smaller changes and separate tools.

Were there any “aha” moments along the way?

No, not singular ‘aha’ moments, but certainly there were small ones in-between. I usually work by analyzing a problem and then gathering a large amount of statistical data. After that, it usually brews in my mind when I’m not even working. The majority of the invention process is just the extremely organized gathering of the data, looking for trends, and doing statistical analysis of the data. And then there can be a small ‘aha’ moment when I spot something interesting and think how to use it. I’m a very systematic person, and I never consider that a problem cannot be solved or improved.

How has your invention impacted the industry and society overall?

Thanks to the improvements we made in video compression, video became a part of our everyday lives. When I was starting out in the mid-nineties, you only saw video broadcast on TV. Internet streaming was just starting, and video on mobile devices didn’t exist.

But, today, video is everywhere and it's not only about entertainment. We also use it for work, remote education, and telemedicine, which wasn’t even possible a couple of years ago because video quality was too low to rely on it. It’s also used in XR and cloud gaming, as well as many other applications we don't even realize.

For example, the fastest-growing segment of video bandwidth is in machine-to-machine communication, where the end-user is not human, but a machine. When you think about all the applications we keep hearing about — such as smart cities, smart homes, connected cars, and other industries and applications that require monitoring, like monitoring of the railways, pipelines, and electric lines — what’s happening is that the machine is capturing the video. It’s then sent to another machine, which then uses a computer vision program or neural network to analyze it, identify objects, and recognize and predict events.

Overall, any video you watch is usually compressed hundreds to thousands of times. Without the work that me and others are doing, we’d only be able to watch tiny videos that are just a couple of pixels by a couple of pixels, with a very low frame rate of only a couple of frames per second.

How important is a culture of innovation?

What I think is especially important is that Qualcomm understands research takes time. There’s uncertainty connected to it, and you can’t always put a timeline on it. The timeline between new generations of codecs, for example, is five-plus years. They realize that what my team and I do is risky; that is, we may not have results or anything to show after half a year, or we might be trying multiple things without achieving any interesting results. But Qualcomm is willing to invest. They’re willing to give us time to do our jobs, and they’re okay with failure. I think this is very valuable, and I wouldn't be certain that every company is willing to take this risk.

What advice would you give to other inventors?

Just be patient. If you're like me and like solving problems, figure out what area or topic is most interesting to you. When I was first deciding which area I would focus on, there were various possibilities where I could apply my skill sets. But video always looked interesting to me, and even at the time I thought this is where the future would be. People were talking about the applications that I'm mentioning, but everybody said it was impossible.

So find a problem that you feel strongly about and that you believe in, because when you’re starting, people might not be enthusiastic about it. You just have to believe in yourself and in what you’re doing, and hopefully you’re right. Think about the problem, and the invention will follow.

Learn more about invention at Qualcomm.