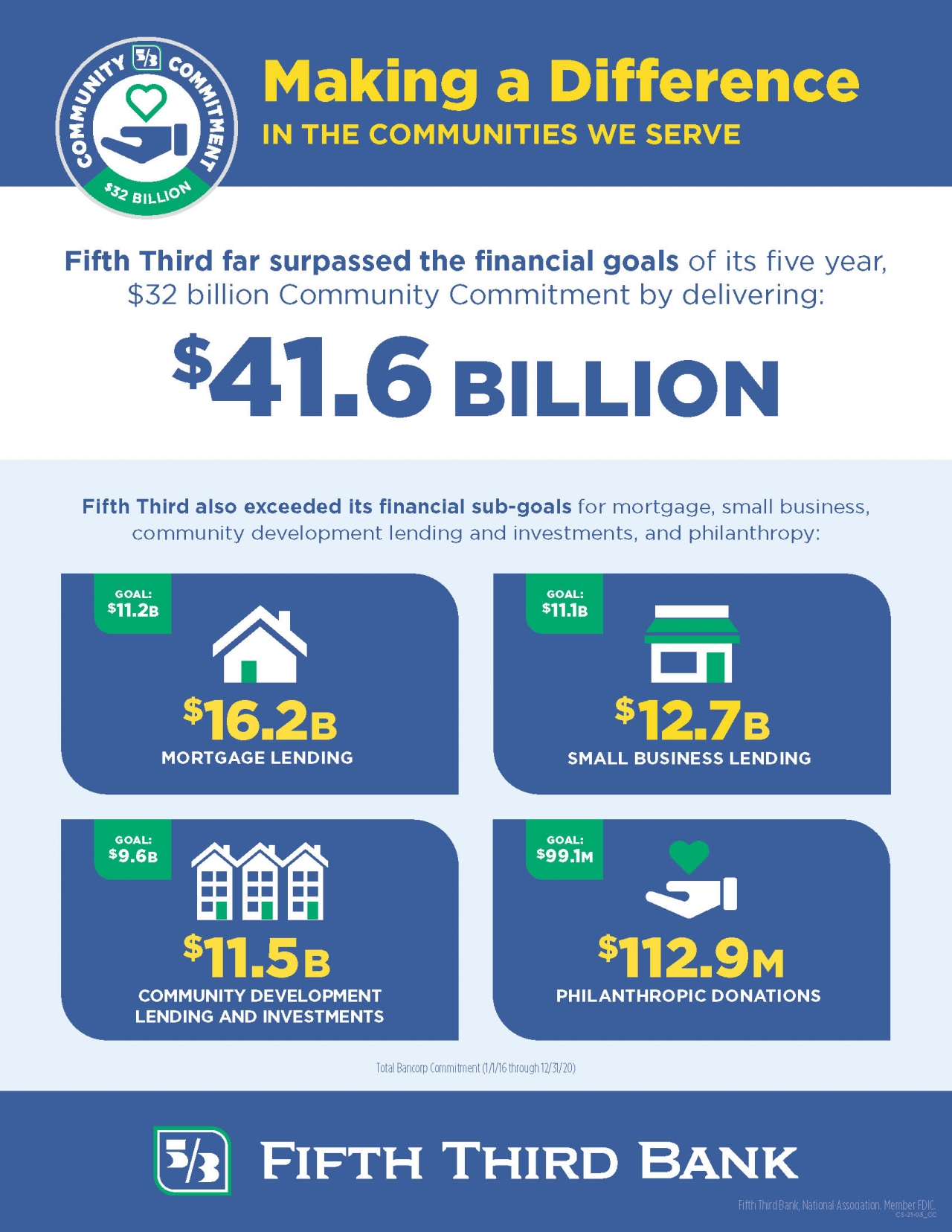 CINCINNATI, April 2, 2021 /CSRwire/ – Fifth Third Bank, National Association, today reports that it has exceeded the financial goal of the five-year Community Commitment it made in 2016. Fifth Third has delivered $41.6 billion in lending and investments, 130% of the $32 billion target* it announced with the National Community Reinvestment Coalition, together with more than 145 community signatories throughout its footprint.

The Community Commitment was announced in early 2016 as a $27.5 billion plan over five years. Later that year, it was increased to $30 billion upon consultation with hundreds of community groups and the NCRC. In 2018, the Bank again expanded the commitment, to $32 billion, in consideration of its planned expansion in Chicago through its acquisition of MB Financial, Inc. The $32 billion pledge included mortgage lending, small business lending, and community development loans and investments.

Fifth Third Chairman and CEO Greg D. Carmichael said, “We thank the NCRC and the communities we serve for teaming up to help the Bank develop a Community Commitment five years ago that would have a lasting impact. Their collaboration and precious insights on behalf of their communities guided us to deliver a better plan. By relying on the experiences gained over the last five years – including addressing the effects of the pandemic and racial inequities this past year – we’ll move forward with confidence as we determine to do well by doing good.”

“The community benefits agreement we established with Fifth Third Bank in 2016 was one of our first and largest,” said Jesse Van Tol, CEO of NCRC. “We are happy to see it come to fruition over the past five years. We also look forward to continuing our work with Fifth Third to ensure low- and moderate-income communities and communities of color have access to the banking services they need to build wealth.”

Executive Vice President Kala Gibson, chief enterprise corporate responsibility officer and head of Business Banking, said, “I salute our community partners as well as the Bank’s employees whose tireless work these past five years has made all the difference. This Community Commitment marks a significant turning point for how we approach community support and outreach. It has helped inform major new initiatives like the $2.8 billion Accelerating Racial Equality, Equity and Inclusion initiative announced in 2020 and pioneered a new model for community support with our first neighborhood adoption in Detroit in 2019.”

Fifth Third has delivered $16.2 billion in mortgage lending since 2016, exceeding the goal of $11.2 billion. Under the Commitment, the Bank specifically worked to address the lack of affordable housing in communities within its footprint and created a new down payment assistance program. There are now more than 4,500 new homeowners thanks to the program, which offers 3% of the purchase price, up to $7,500, for the purchase of a property in a low-income census tract or for borrowers who meet certain income requirements. The DPA also can be combined with other state and local programs. Since the program’s inception, Fifth Third has provided over $14.9 million in DPA assistance.**

The Bank has delivered $12.7 billion in small business lending under the Commitment, exceeding the 11.1 billion* goal. In addition to lending and lines of credit, the Bank provided capital and technical assistance to small businesses, especially those that are minority- and women-owned. The Fifth Third Foundation made grants to more than 50 Black, woman entrepreneurs and the businesses they support in Atlanta, Charlotte, Cincinnati, Detroit, Louisville, Nashville and Orlando through its new $1.2 million Innovation Meets Main Street program. The Bank also helped hundreds of small business owners of color through its combined investment of $5.5 million in Entrepreneurs of Color Funds in Chicago and Detroit. Fifth Third also partnered with Community Reinvestment Fund USA to create the Capital to Build Capacity program, which was designed to improve and increase lending opportunities for small business owners and resource providers. Over the last five years, the Fifth Third Foundation and Fifth Third Bank have enabled over 1,000 underserved entrepreneurs get access to over $13 million in capital and other technical assistance through support of Accion, a global nonprofit.

Fifth Third has funded $11.5 billion in community development lending and investments since 2016, including $1.1 billion in affordable lending and revitalization projects through the Fifth Third Community Development Corp., against a goal of $9.6 billion. Fifth Third helped transform the Detroit neighborhood of Gratiot/7 Mile, known as G7, through a $5 million investment in parks, streetscapes, commercial corridors, single family housing and affordable housing.

The Fifth Third CDC invests in projects that revitalize communities, create affordable housing and restore historic buildings, including Hope Manor, the new construction of 36 affordable housing units for veterans, the disabled and homeless in Chicago. The Hope Manor investment was part of a recently announced $100 million in projects that the CDC will invest through Opportunity Zone partners.

Fifth Third has made $112.9 million in Community Commitment-related grants since 2016 against a goal of $99.1 million. The grants supported all aspects of community development, including affordable housing, workforce development, neighborhood stabilization and small business support as well as other areas. In response to the COVID-19 pandemic, Fifth Third made $8.75 million in relief, recovery and resiliency grants across its footprint.

The Bank also worked to support communities through specific programming and Fifth Third-led initiatives. Over 2.6 million people of all ages have been educated through Fifth Third’s financial empowerment programs, including Fifth Third Finance Academy and the newly revamped Young Bankers Club. The Bank’s eBus takes financial services and education directly into communities. Over the past five years, the eBus served over 78,000 attendees at financial education and workforce development events. Fifth Third also continued its collaboration with NextJob to provide vital job training and coaching to unemployed and underemployed community members. Fifth Third’s supplier diversity spending has increased from $18.4 million in 2016 to $75.4 million in 2020.

All these efforts are done in collaboration with community partners and shared with the Bank’s national Community Advisory Forum and five regional CAF groups that comprise national, regional and local community leaders. More information about the 2016-2020 Community Commitment is available in the Bank’s 2019 ESG Report. The Bank’s 2020 ESG Report is due out later this year on the Bank’s ESG site.

Fifth Third Bancorp is a diversified financial services company headquartered in Cincinnati, Ohio, and the indirect parent company of Fifth Third Bank, National Association, a federally chartered institution. As of Dec. 31, 2020, Fifth Third had $205 billion in assets and operated 1,134 full-service banking centers and 2,397 ATMs with Fifth Third branding in Ohio, Kentucky, Indiana, Michigan, Illinois, Florida, Tennessee, West Virginia, Georgia, North Carolina and South Carolina. In total, Fifth Third provides its customers with access to approximately 52,000 fee-free ATMs across the United States. Fifth Third operates four main businesses: Commercial Banking, Branch Banking, Consumer Lending and Wealth & Asset Management. Fifth Third is among the largest money managers in the Midwest and, as of Dec. 31, 2020, had $434 billion in assets under care, of which it managed $54 billion for individuals, corporations and not-for-profit organizations through its Trust and Registered Investment Advisory businesses. Investor information and press releases can be viewed at www.53.com. Fifth Third’s common stock is traded on the Nasdaq® Global Select Market under the symbol “FITB.” Fifth Third Bank was established in 1858. Deposit and Credit products are offered by Fifth Third Bank, National Association. Member FDIC.

*Results of the Community Commitment as of Dec. 31, 2020, are indexed to the goals set when the Commitment was expanded to $32 billion in 2018. **Impact programming goals of $213.2 million were in addition to the final $32 billion lending and investment commitment.

**Lending subject to credit review and approval. To be eligible for the down payment assistance of 3% of the home’s purchase price, up to $7,500, the property must be in one of the following eligible states: MI, IN, IL, KY, TN, OH, WV, NC, GA, FL and either located in a low income census tract or borrower must meet the low income limit threshold based on the qualifying income per FFEIC website. Down payment assistance may be taxable as income and reported to the IRS. Consult your tax advisor. Not available with all loan products.