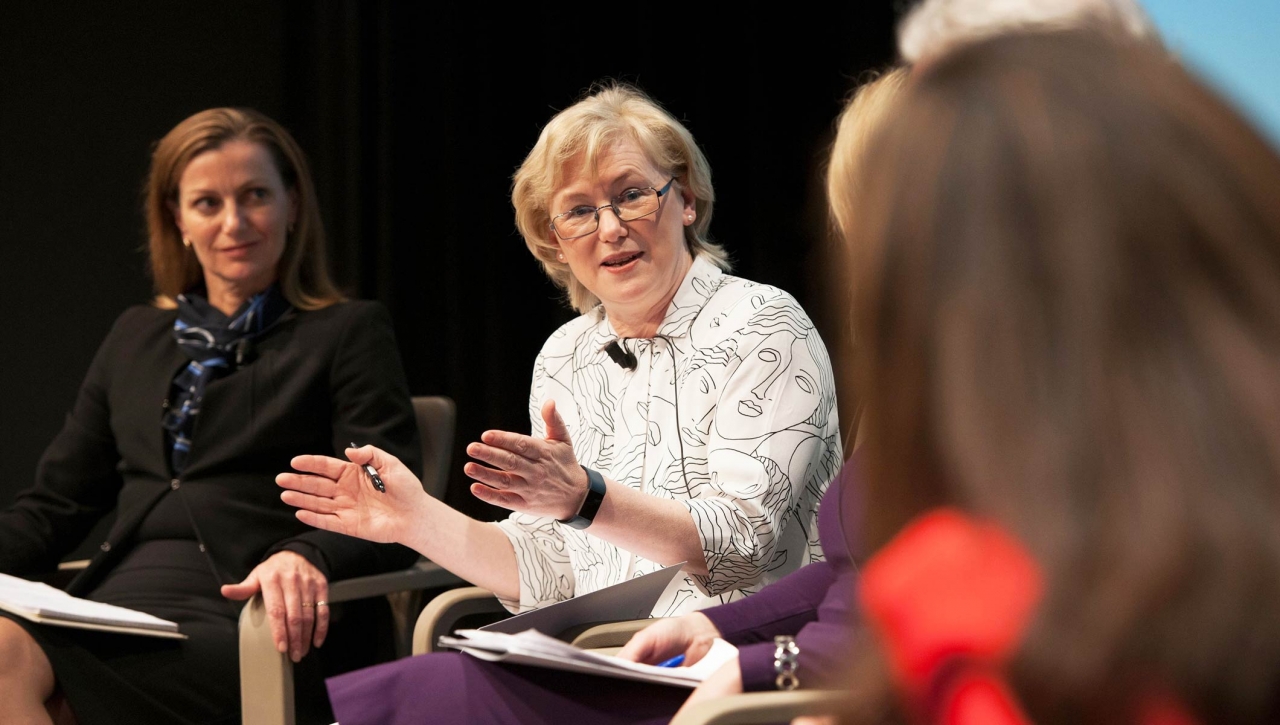 The theme of International Women’s Day 2021 is “Women in leadership: Achieving an equal future in a COVID-19 world.” Throughout March and in the run-up to Tokyo 2020, the IOC will share the journeys of inspirational women and men who are dedicated to combating gender inequality and promoting female representation in leadership roles. Here, in the first article of the series, the IOC speaks to the Olympic gymnast and current BBC Director of Sport, Barbara Slater, about the importance of women holding leadership positions and the issues of equal representation and greater visibility in women’s sport.

As a leading woman working in sport, Barbara Slater is well placed to impart her wisdom on the leadership theme of this year’s International Women’s Day. Having represented Great Britain in gymnastics at the Olympic Games Montreal 1976, Slater made a highly successful transition to the media industry at the end of her sporting career, joining the BBC during the 1980s and eventually rising through the ranks to become the corporation’s first-ever female Director of Sport.

Slater enhanced her reputation following the BBC’s much-praised broadcast operation for the Olympic Games London 2012. More recently, she has spoken about the importance of the BBC normalising women’s sport across its output and of combating social media abuse towards female athletes. Ahead of 8 March, she shares her thoughts on the roles that sport and the Olympic Games can play in the fight for gender equality.

HOW DID SPORT INFLUENCE YOUR CAREER PATH, AND WHAT CHALLENGES HAVE YOU FACED AS A WOMAN IN A MALE-DOMINATED ENVIRONMENT?

“My sporting career in gymnastics was a huge influence. It opened doors, because when I joined BBC Sport back in the early 1980s there were no women. There’s no doubt in my mind that representing Team GB at the 1976 Games meant that I joined the department commanding a little bit more credibility and respect. I was more accepted because I had competed at a high level, so nobody could question my commitment to sport.

“If I hadn't had that springboard of being a competitor, I’m not sure I’d be in the role that I am now, because it was a bit of a closed shop in those days. I believed I could come into the department and offer something a little bit different.”

WHICH WOMEN HAVE INSPIRED YOU IN YOUR LIFE?

“Anyone who follows the history of the Olympic Games will know about the huge impact Olga Korbut made at the 1972 Games in Munich. I was just a youngster then and I remember being bowled over by this extraordinary athlete who defied what gymnastics had been like in the past with her daring moves. I was so fortunate that Korbut smashed those barriers in gymnastics. Then at Montreal four years later there was Nadia Comăneci who reset the bar as to what female athletes could achieve. They were real role models.

“I think I was lucky in gymnastics because it has an enormous track record of equality. Female gymnasts were the stars as much as the male gymnasts. The likes of Korbut and Comăneci made you believe that you could go on and achieve things.”

BASED ON YOUR EXPERIENCE IN THE BROADCASTING WORLD, WHAT CAN BE DONE TO ENSURE MORE WOMEN TAKE ON LEADERSHIP ROLES IN SPORT AND WHAT ADVICE WOULD YOU GIVE TO THOSE WHO ASPIRE TO REACH THESE POSITIONS?

“I think it’s all to do with women resetting their expectations. That’s one of the great things I see today that I perhaps didn't see when I first joined the industry. If you had said to me in the early 1980s that I would one day become Director of Sport of the BBC, I would have told you that was impossible. There were no role models; you almost felt as if you were the first in a generation coming through and being given opportunities. That's what I think is so different today. Those entering the industry can have role models, and although we aren’t anywhere near full equality, progress is certainly being made. Having those role models is absolutely critical.

“Be an expert in your job and don’t be afraid to seek out advice. I love it when somebody gets in contact with me and I can give them practical advice. More often than not it’s to do with confidence and the belief that you can do it. The good thing is that we are having these conversations now. Many organisations are setting targets, and there is an awareness that it hasn't been a level playing field and that inequalities exist. My experience tells me that diverse teams are better teams.

“They're more creative, they’ve got broader perspectives and they bring different thinking to the discussion. This makes complete sense from a business point of view, because the more diverse a team is the better it performs.”

IN LIGHT OF THE COVID-19 PANDEMIC, WHAT IS THE SIGNIFICANCE OF THIS SUMMER’S RESCHEDULED GAMES?

“It’s been an incredibly challenging time for everyone, and the uncertainty has been really difficult. But there is an amazing opportunity here of Tokyo 2020 chiming with a moment when the world is starting to recover from the pandemic. The staging of the Games is always a special moment, but I feel this time it could be even more special. These Games will get talked about for decades to come because of their timing and their potential.”

FOR THE FIRST TIME EVER, THERE WILL BE AT LEAST ONE FEMALE AND ONE MALE ATHLETE IN EACH OF THE 206 TEAMS PARTICIPATING AT THE GAMES. WHY IS IT IMPORTANT TO HAVE EQUAL REPRESENTATION IN SPORT?

“It's absolutely crucial, and I think it’s right that we look at values-driven organisations such as the IOC to set an example. So much flows from that. We shouldn’t underestimate the transformative effect that equal representation can have and how it raises expectations.”

WHY IS GREATER VISIBILITY FOR WOMEN’S SPORT IMPORTANT?

“The Canadian broadcast executive Nancy Lee once did a presentation at the IOC Press Committee where she noted that many sports finished their timetables with men's events. The cumulative effect was that as you got to the closing period there was an increasing dominance of men's events.

“What was brilliant was that it was listened to. Not only is Tokyo 2020 set to be the most gender-balanced Games ever, with female athletes making up 49 per cent of the total competitors, but there will also be a more balanced competition schedule, with more women’s events happening on the final weekend. It shows that gender is a lens that the IOC will look through when they’re determining schedules. It’s an area where there have been really big strides.”

WHAT INITIATIVES HAS THE BBC TAKEN TO COMBAT PREJUDICE AND STEREOTYPES IN THE PORTRAYAL OF WOMEN IN SPORT?

“At the BBC, we work very hard to try to make sure we don't slip into stereotypes. We work on this in a number of different ways. One of the things we really want to do is to normalise women's sport. It’s a crucial part of the business. We very consciously and actively seek out wonderful stories, and we will be really mindful about trying to make sure that we're telling a much richer mix of stories. In many ways London 2012 was a springboard for that.

“It’s not unusual for us to lead our bulletin with a women's sport story. What's great about that is it's made our reporting better, more diverse and more varied. Another example is imagery; we're really conscious of showing good imagery of female as well as male athletes in our output. Language is also incredibly important – I think some of the cliches that would have been used in the past are far less common now, which is good.”