PNC continues to expand, enhance its support of Guardian Angels, a non-profit organization that pairs service dogs with veterans who have disabilities 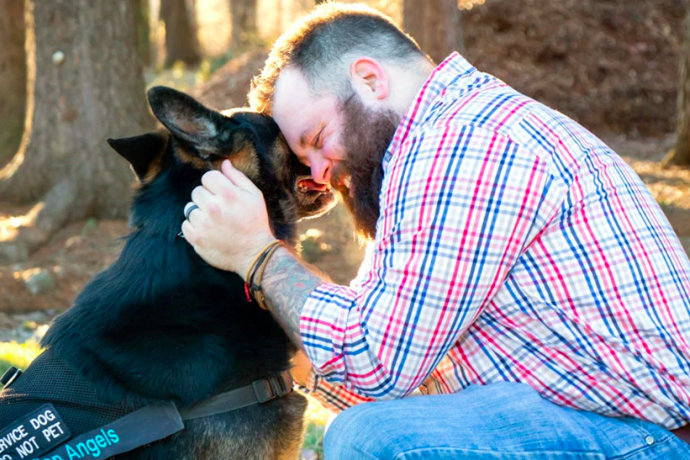 Army veteran John Kelly received Ranger, a service dog trained by Guardian Angels, in 2016. Kelly has become a strong proponent for Guardian Angels, a non-profit organization which pairs service dogs with veterans who have disabilities at no cost to the recipient.

Around the same time, Juchno, the leader of PNC’s internal audit department, heard about Guardian Angels, a non-profit organization that pairs service dogs with veterans who have disabilities.

“What if I could get the group to sponsor one service dog, and we could follow the journey of the veteran and the dog?” Juchno recalled wondering at the time.

Out of the idea, a much larger initiative to support veterans sprouted. In 2016, Guardian Angels established and PNC sponsored the Mutt Strut, a fundraiser that started as a charity walk for people and pets in Pittsburgh’s Frick Park. Two other markets — Erie, Pa., and Dayton, Ohio — later added events, and in 2020, the Mutt Strut went virtual amid the COVID-19 pandemic. Throughout the evolution, the commitment to honoring veterans’ service and helping those in need held firm.

In five years, PNC raised and donated enough money to fund 57 service dogs from Guardian Angels — the cost for each dog ranges from $20,000 to $25,000. Guardian Angels does not pass any part of those costs on to the dogs’ recipients.

“Our employees found a better way to not only engage our Military EBRG with Guardian Angels and the amazing service dogs, but they helped us engage so many veterans and veteran advocates in the community,” Juchno said. “Before the Mutt Strut started, I thought if we create awareness about veteran suicide, we will have been successful. I dreamed of one dog for one veteran. My expectations continue to be exceeded.”

A Solution that Saves Veterans’ Lives

“All of a sudden, when the sun came out, it was the most beautiful day, and it stayed that way through the entire event, so that was sort of a sign of things to come,” said Borden, whose organization operates out of Williston, Fla. “If I had to dream of an ideal sponsor, it would be PNC.”

Expansion of the events to new areas attracted more PNC employees to the cause, and the idea of veteran advocacy spread among even those who never served and lacked family ties to the military.

“It all came together for me after I heard some of the veterans’ stories and saw the dogs in action,” said Jeff Szumigale, a PNC Wealth Management market director in Erie. “That’s when the proverbial light bulb went off, and I thought, ‘My goodness, I think I’ve got a good friend who could use this.’

“You don’t have to be a veteran to help or to care. Almost everybody knows somebody who was in the military, and chances are one of those folks is experiencing challenges.”

Guardian Angels named PNC its Sponsor of the Year for 2020. PNC remains proud to work with Guardian Angels, which maintains a remarkable track record with veterans. Tragically, during the past decade-plus, an average of 17 veterans died by suicide each day, according to a 2019 report from the Department of Veteran Affairs. Yet none of the more than 350 veterans paired with Guardian Angels service dogs since the organization’s founding in 2010 are among those statistics.

“This is a solution that works, and not enough people know about it,” said Chris Phillips, a Marine veteran who works for PNC as a military affairs liaison and leads efforts to support Guardian Angels’ execution of the Mutt Strut events. “You never realize whose lives you’re changing until somebody reaches out.”

Phillips hopes success of the virtual version of the Mutt Strut means PNC and Guardian Angels’ message will begin to reach veterans online rather than relying solely on attendance at in-person events.

“Veterans don’t serve by ZIP code,” she said. “I think this year, we really tried to show that we’re serving all of our veterans from every community out there.”

While fundraising is critical to its mission, initiating conversations about disabilities with veterans is just as high a priority for Guardian Angels and its sponsors.

“When I have an opportunity to talk to veterans directly,” Borden said, “I encourage them to not only understand what these dogs can do for them — some things that not even a caregiver is able to do — I also make them realize they’re leaders, and they’re role models to other veterans. It’s not just for those with PTSD, either. Whether their disability is related to mental health or mobility, veterans need to experience the impact a service dog can have on their own lives and then share that, and they do.”

Army veteran John Kelly received his Guardian Angels service dog, Ranger, in 2016 and soon became a passionate proponent for the cause.

“For a long time, I was without what I would consider, in like a Samurai sense, my honor,” Kelly said. “I was walking around as empty as a shell. And you guys helped bring me back from that.

“With the strategic vision of the Mutt Strut and Guardian Angels supported by PNC, you’re saving lives every day.”