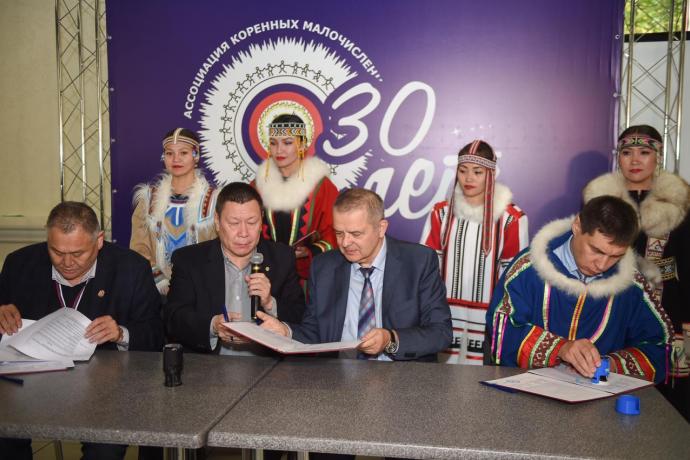 Nornickel, the world’s largest producer of palladium and high-grade nickel and a major producer of platinum and copper, has signed cooperation agreements with three organizations representing the indigenous peoples of the Taimyr Peninsula.

These organizations represent over 90% of the indigenous population living in the north of Russia. Nornickel has developed jointly with them a comprehensive, five-year support programme totalling 2 billion roubles. The new programme expiring in 2024 includes a wide range of various initiatives aimed at the protection of the natural habitat and support of the traditional activities of the indigenous peoples, as well as funding for housing, medical, infrastructural, touristic, educational, and cultural projects. The list of these projects has been defined with an immediate input from the local indigenous communities, which should provide the basis for the most efficient cooperation between indigenous peoples, local governments, and industrial companies regarding regional development.

The programme has been developed as a follow-up to an ethnographic expedition carried out this summer in the Taimyr Peninsula, involving over  100 interviews and various polls of indigenous communities . A number of priority areas for support have been identified through these polls and interviews, which include creation of seasonal jobs in tourism and other industries, reindeer husbandry, fishing, and hunting. The initiatives already included into the roadmap include construction of workshops for reindeer and fish processing, purchase of refrigeration units, construction of an ethnical complex with workshops for fur processing, subsidisies of helicopter transportation, targeted training for professions in demand at Nornickel, and publishing of textbooks in indigenous languages and many other ad hoc and complex initiatives. The presentation with more details is available here.

Andrey Grachev, Vice President, Federal and Regional Programmes, of Nornickel, has commented on the cooperation agreements: “We have jointly defined new systemic initiatives aiming at the support of indigenous peoples living in the Taimyr Penimsula, which have now been consolidated in an agreement. This is a 2 billion roubles programme comprising over 40 initiatives  in the next five years. Firstly, it is aimed at stimulating the economic activity of the indigenous peoples and facilitating the use of renewable resources – the basis of their traditional lifestyle. Nornickel has a long history of close cooperation with organisations representing the interests of indigenous communities in the regions of our operations, ensuring transparency in decision-making and that joint projects are implemented in the most efficient manner possible.”

Grigory Ledkov, President of the Association of Indigenous Minorities of the North, Siberia and the Far East of the Russian Federation, added: “This agreement can serve as an example for other companies, as it emphasizes the importance of preserving the habitat of indigenous people and protecting our values and traditions.

The full-scale ethnographic expedition to hear the opinions of indigenous populations has already become a huge step in the right direction and will serve as a model for future projects of this kind. The results of this expedition will help to make to develop initiatives which will be of paramount importance for indigenous populations. We are confident that the agreement will help us find new joint approaches to sustainable living and working in the North, as well as resolve other pressing issues facing local communities.”

Nornickel participates regularly in projects aiming at the socio-economic development and support of the indigenous populations of the Taimyr Peninsula, which include air transportation, the procurement of building materials and diesel fuel, as well as cultural events and celebrations.  Particular attention is paid to preserving the languages of the indigenous peoples of the North. Nornickel’s participation in the reconstruction and construction of various social facilities is another important way in which the company offers its support to local communities. Nornickel has funded the full reconstruction of Neptun swimming pool , the children’s orphanage centre and sports complex in Dudinka town, and construction of a cultural centre in the village of Kheta. Nornickel has also co-funded the construction of a sports and recreation centre in Dudinka. The Company’s total financial support towards support and development of the regions, where indigenous populations reside permanently, amounted to 277 million roubles from 2018 to 2020.

MMC Norilsk Nickel is a diversified mining and metallurgical company, the world’s largest producer of palladium and high-grade nickel and a major producer of platinum and copper. The company also produces cobalt, rhodium, silver, gold, iridium, ruthenium, selenium, tellurium, sulphur and other products.

The production units of Norilsk Nickel Group are located at the Norilsk Industrial District, on the Kola Peninsula and Zabaykalsky Krai in Russia as well as in Finland and South Africa.