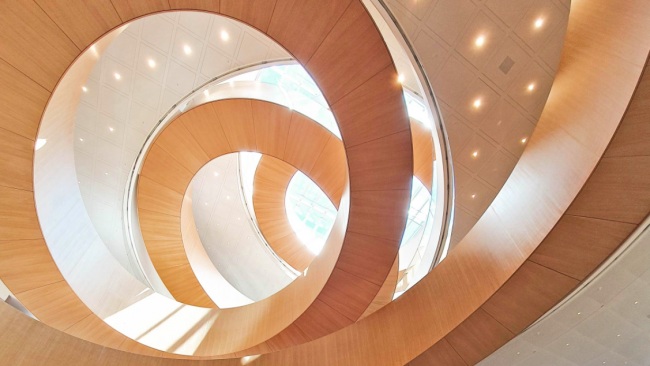 Olympic House, the IOC headquarters in Lausanne, Switzerland, and one of the most sustainable buildings in the world, has won two prestigious Architizer A+ Awards which recognise its innovative sustainability features and the iconic, five-ring Unity Staircase.

Adding to the already impressive collection of accolades, Olympic House was chosen among over 5,000 entries from 100+ countries. Special emphasis was placed on “honouring projects that respond to imminent global challenges such as climate change, urbanisation and migration, rising inequity, and the pandemic”.

“We are honoured that Olympic House has received yet another prestigious award,” said Marie Sallois, IOC Director for Corporate and Sustainable Development, who oversaw the Olympic House project. “The Architizer A+ award reflects what has been at the centre of our project from the outset: that Olympic House is much more than a building; it reflects the IOC’s mission to make the world a better place through sport and demonstrates our strong commitment to sustainability.”

Designed by Danish architecture firm 3XN, in collaboration with Swiss firm IttenBrechbühl, Olympic House was opened on 23 June 2019. It has received three of the most rigorous sustainable building certifications: LEED Platinum (the highest number of points of any LEED v4 new construction project), the Swiss Sustainable Construction Standard (SNBS) and the Swiss standard for energy-efficient buildings, Minergie P.

With its shape inspired by an athlete and roof-top solar panels in the shape of a dove, Olympic House combines the highest standards in architectural design with a holistic approach to sustainability. It incorporates rigorous criteria in energy and water efficiency, while optimising the health and wellbeing of its users.

The building is powered by renewable energy and uses water from nearby Lake Geneva for cooling and heating. Ninety-five per cent of Olympic House construction waste was recycled, and more than 95 per cent of the former IOC building was recycled or reused. Carbon emissions from the building’s construction and operations have been compensated through the IOC-Dow carbon partnership. The design makes user comfort a priority, with flexible spaces, high indoor air quality, views and abundant natural light. Its central “Unity” staircase, which echoes the Olympic rings, encourages movement and cooperation among its users.

Prior to receiving the Architizer A+Awards, Olympic House won the Blueprint Award 2019, the first prize in the Building Ecology category of the Prix Bilan de l'immobilier 2019 and – most recently – the USGBC Leadership Award 2020, among others.

Architizer is the world’s leading online platform for architecture and building products, and the A+Awards is the industry’s largest and most international awards programme, celebrated by a global audience of over 400 million. It honours the best architecture, spaces and products from across the globe, with the mission to “nurture the appreciation of meaningful architecture around the world and champion its potential for a positive impact on everyday life”.