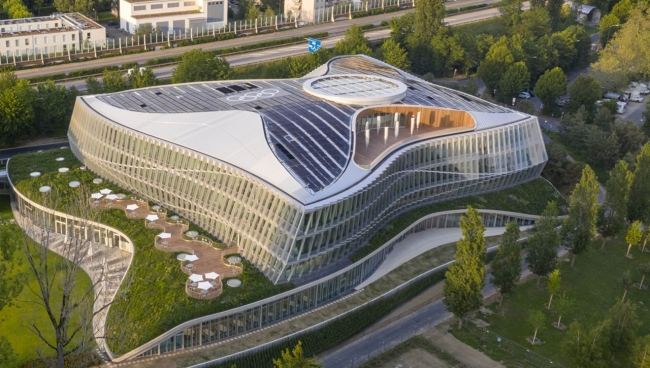 The award, announced today by the USGBC, recognises “those advancing the development of sustainable, healthy and resilient buildings, cities and communities in regions around the world”. It has been given to five organisations that are “a model for how LEED can be used to improve communities, support human health and well-being and contribute to a more sustainable future for all”.

“We are honoured to receive this prestigious recognition, which emphasises the importance of sustainability in shaping our future,” said IOC President Thomas Bach.

“Sustainability is one of the three pillars of Olympic Agenda 2020, our reform programme, and it was always at the heart of the Olympic House project. Olympic House serves as an inspiration to others who, like us, believe that sustainability must be an integral part of any organisation. The IOC is walking the talk. We are already a carbon-neutral organisation and are aiming to become climate positive before 2030.”

Inaugurated on 23 June 2019, Olympic House embodies the IOC’s strong commitment to sustainability. It incorporates rigorous criteria in energy and water efficiency, while optimising the health and well-being of its users.

The building is powered by renewable energy, part of which is produced on site. Ninety-five per cent of Olympic House construction waste was recycled, and more than 95 per cent of the former IOC building was recycled or reused. The design makes user comfort a priority with flexible spaces, high indoor air quality, and high-quality views for 90 per cent of regularly occupied spaces. Carbon emissions from the building’s construction and operations have been compensated through the IOC-Dow carbon partnership.

One year after its inauguration, Olympic House is delivering impressive results in terms of its operations, having cut energy consumption and non-recyclable office waste by half compared to the former IOC building. IOC staff have also been able to reduce food waste by 30 per cent and increase the use of sustainable commuting modes from 50 per cent to 60 per cent since moving into the new building. A hydrogen production and filling station was installed to refuel the organisation’s pool of Toyota Mirai cars.

In addition to receiving the highest number of points of any LEED v4-certified new construction project to date, Olympic House is the first international headquarters – and the second building overall – to obtain the highest (Platinum) level of the Swiss Sustainable Construction Standard (SNBS). It has also been awarded the Swiss standard for energy-efficient buildings, Minergie P.