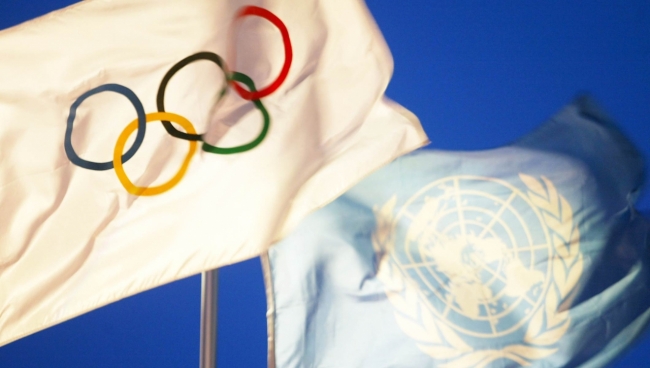 Launched by the UN Secretary-General, António Guterres, #UN75 is a global dialogue initiative that generates discussions in all spheres of society about the challenges the world is currently facing. Views, concerns and ideas expressed during these sessions will be presented by the UN General Assembly to world leaders at the official commemoration of the UN’s 75th Anniversary in September 2020.

The focus of today’s conversation, named “Multilateralism in the time of Covid-19”, was the impact of COVID-19 on culture, sport and tourism.

In her opening statement, the Director-General of the United Nations Office at Geneva (UNOG), Tatiana Valovaya, explained that these three sectors were chosen “because they have suffered the most as a result of the pandemic. The economic and social consequences for these spheres of activity are tremendous”.

“Unfortunately, all major sports events had to be cancelled or postponed. All of us were looking forward to the Olympic Games this year but, as a result of the pandemic, they had to be postponed,” she added.

THE ROLE OF SPORT IN THE POST-COVID-19 WORLD

“The post-coronavirus world will benefit from sport. And we are ready to contribute to shaping it, we are ready to make the world a better place through sport,” said the IOC President in a video message, calling upon governments of the world to include sport in their post-coronavirus support programmes because of the essential contribution that sport brings to society.

“Sport is contributing to the recovery from the crisis and to creating a better world on the health, the social and the economic side,” commented President Bach. “Sport creates jobs, generates business activity, plays a significant economic role in many countries, all of which are vital elements as countries look to reopen their economies.”

The IOC President also stressed that no concrete results can be achieved without solidarity, a key value promoted by sport: “The first lesson we all learnt from this crisis is that we need more solidarity. Solidarity within societies and solidarity among the nations of this world. We must be united in our solidarity,” Bach concluded.

The role of sport as a powerful enabler to build inclusive societies and foster gender equality was also widely discussed during the session. “Women in sport should not be left behind in the recovery phase. Vulnerable communities and parts of our society need to be taken into consideration when we talk about post-COVID recovery and we need to build on the successes that have already been achieved,” said three-time Olympian in shooting and Olympic bronze medallist in 2012 Danka Bartekova.

This message was echoed by Marta Vieira da Silva, a Brazilian football player and UN Goodwill Ambassador, who joined the dialogue: “We are coming together in creative ways to mitigate the negative effects of the pandemic on our societies and the world of sport. Let’s not forget the women and girls in this process. Our gains cannot be lost. We want to make a better future for all a reality, a future where women and girls can study, work, govern, and enjoy sport on an equal playing field,” she said.

Over the last few months, the IOC has been working closely with all the stakeholders of the Olympic Movement to ensure that gender equality remains high on their agenda despite the impact of the pandemic, which is already being felt harder by women and girls in many areas of life due to gender inequalities. Particular attention has been given to the implementation of the recommendations of the IOC Gender Equality Review Project, which, since its launch in March 2018, has provided National Committees (NOCs) and International Federations (IFs) with a solutions-based approach to achieving gender equality on and off the field of play. A series of webinars is also planned over the summer to ensure that women and girls are actively taking part in sport recovery plans.[EM1]

Today’s discussion was also an opportunity to reflect on the important role that professional athletes have taken in society throughout the crisis, acting as role models to motivate their communities to stay active. These athletes have also been impacted by the COVID-19 pandemic, however; and it is important to note the role that international sports organisations must play to support their mental well-being.

“For us athletes, the lack of access to sports facilities and to a normal training schedule, and the isolation from our teammates and the wider athlete community, has led us to struggle to stay fit,” explained Danka Bartekova.

This struggle was voiced clearly in the results of a survey recently conducted by the IOC, in which staying mentally fit was listed among the biggest challenges faced by athletes during the pandemic.

Since the beginning of the health crisis, the IOC has endeavoured to provide additional resources and tips to athletes on how to stay positive during isolation through its dedicated Athlete365 platforms and engaged in regular conversations during tailored webinars.