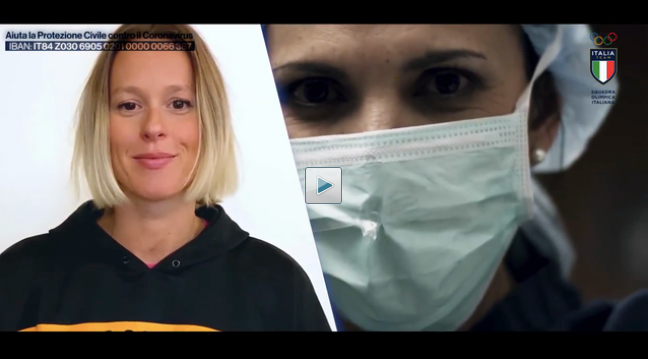 At a time when populations are being asked to stay at home to contain the spread of the COVID-19 pandemic, athletes are not only setting examples on how to #StayActive / #StayStrong / #BeActive / #HealthyAtHome and leverage physical activity to face this unprecedented situation, as celebrated yesterday on the occasion of the International Day of Sport for Development and Peace, but many of them are also working actively in healthcare facilities.

Some have successfully combined medical studies or nursing with their sporting careers, or have switched to health work after retirement. Others have shown their gratitude to all the health workers who are toiling untiringly every day to save lives. This is the case of athletes from the Italian Olympic Team, who came together in the video below to show their support and say an enormous thanks, or “grazie”, to all the medical staff fighting the pandemic.

In honour of World Health Day 2020, the IOC joins in thanking all the healthcare workers on the front lines of the pandemic and highlights some stories from athletes who are among them.

Argentina's reigning Olympic -48kg judo champion Paula Pareto is one of those who have joined the effort to fight COVID-19.

After spending two weeks in self-isolation following the Yekaterinburg Grand Slam, Pareto returned to the San Isidro Hospital just north of Buenos Aires, where she works as an orthopaedic doctor.

She quoted Winston Churchill in her first post when back at work, saying: “We are the masters of our fate. The task which has been set us is not above our strength; its pangs and toils are not beyond our endurance. As long as we have faith in our cause and an unconquerable willpower, victory will be within our grasp.”

Referring to her own circumstances, she added, “Although orthopaedic doctors are not on the front line, we are a part of the health team facing this pandemic, and we will help where necessary.”

Former Dutch hockey goalie Joyce Sombroek, a gold medallist at London 2012 and silver medallist at Rio 2016, is helping the effort in her homeland.[GL1]

One of the most successful goalkeepers in history, Sombroek was forced to retire after Rio due to recurring hip problems.

After that, she completed her medical studies at Amsterdam's Vrije Universiteit, and worked in departments including Accident and Emergency before beginning her training as a GP in March.

She recently commented on the current situation as follows to the FIH: “The most important thing is providing care to those who need it. I’m really happy that I can do my job, and I think that accounts for everyone working in healthcare or any other vital job.”

When she’s not stopping shots, Australia hockey goalie Rachael Lynch is a nurse in Perth.

She has worked in neuro-rehabilitation, helping patients who have suffered strokes or live with multiple sclerosis, throughout her 13-year international career.

But all efforts are now being channelled into dealing with COVID-19.

The 41-year-old combines her final year of studies at the University of Calgary with being the Toronto Maple Leafs' Assistant Director of Player Development and a member of the IOC Athletes' Commission.

Since January, Wickenheiser has been helping patients in hospital emergency rooms in and around Toronto.

After the disappointment of Rio, she started working full time in her “dream career” as a paramedic for New South Wales (NSW) Ambulances, and has since combined this with training and motivational speaking.

Following the onset of the COVID-19 outbreak, Brigden-Jones told the ABC Grandstand radio show that she had been instructed to leave Sydney for the Gold Coast, for intensive training ahead of Tokyo 2020.

But the postponement of the Games meant that move was shelved, and she has returned to work as a paramedic, where she is transporting people suffering from the coronavirus.

Two-time Scottish curling champion Vicky Wright has returned to nursing having been due to compete in Canada at the World Curling Championships.

Wright, who now plays lead in Sochi 2014 bronze medallist Eve Muirhead's rink, flew out with the team to Prince George before the event was cancelled.

The 26-year-old switched to curling full time in July last year in order to focus on Beijing 2022, but she was able to continue working occasionally at the Forth Valley Royal Hospital near Falkirk.

She told British Curling, “Both the NHS and British Curling enabled me to do one shift a week throughout this season. It was something I really enjoyed and I didn’t want to lose my skills; and it was good to have something else other than just curling - it really kept me grounded.

The 27-year-old was born with Poland's Syndrome, which means he has next-to-no chest muscles on one side of his body, but that has not stopped him pursuing his love of table tennis and medicine.

He completed his medicine degree at the University of Leeds in 2018, and has since worked part-time as a junior doctor at the Whittington Hospital in North London.

He was due to start training full-time for Tokyo 2020 last week, but the postponement of the Games meant a change of plan for Daybell.

He told British Para Table Tennis, “I was coming to the end of my F1 (foundation) year, and due to be finishing to train full-time, but they asked if I would come on a full-time rota, which I have started doing this week. I’m finishing surgery and will be a medical SHO (senior house officer) managing COVID patients.

“I want to try and help as best I can, and it is quite nice to be able to do that. One of the things that people seem to be struggling with is that feeling of powerlessness where they can’t do anything. I’m lucky to have the skill-set to help fight what is going on, and that is a positive that I’m taking.”

“Being a nurse has always given me a good perspective on life and kept my focus on what is important.”

Atletico Madrid vice-captain Silvia Meseguer has volunteered to help in the field hospital set up in the IFEMA exhibition complex in Spain's capital.

She told Atletico Madrid's official website, “Seeing the situation we are experiencing, I think anything we can contribute right now is important. I still don't have a medical degree because I have yet to finish my final project, but if they need help from students, of course I will.