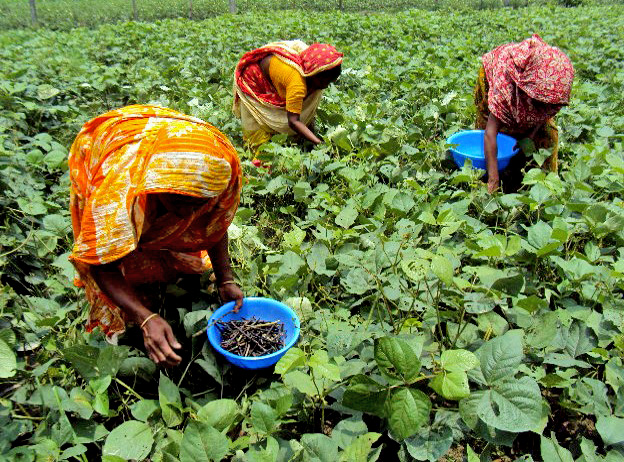 Above: Farmers harvesting the mung bean in Bangladesh as part of Grameen euglena's initiative. Below: Mung beans are needed to produce bean sprouts, one of the most consumed vegetables in Japan.

Japanese company euglena Co. has joined the Business Call to Action (BCtA) with a commitment to contract more than 10,000 farmers in Bangladesh through Grameen euglena, a joint venture with the Grameen Krishi Foundation in Bangladesh headed by Dr Muhammad Yunus. In collaboration with the World Food Programme, euglena Co. also aims to provide mung beans for 21,000 Rohingya people living in Cox’s Bazar.

In Bangladesh, 48 percent of the total workforce is engaged in agriculture. About 70 percent of the country’s population lives in rural areas and faces poverty. Moreover, about 60 percent of households in rural areas do not have access to a sufficient area of land to maintain their subsistence. In many cases, farmers work on land they do not own at very low pay. As a result, they often fall into extreme poverty.

Mung beans are needed to produce bean sprouts, one of the most consumed vegetables in Japan. However, almost all the supplies of mung beans in Japan are imported and about 77 percent are from China while 22 percent are supplied by Myanmar according to 2018 trade statistics. On the other hand, mung bean prices have been increasing in the last 13 years ($660 per ton in 2004, and $2,380 per ton in 2017).  For this reason, it would be beneficial for Japan to have another source of mung beans to secure the sustainable production of bean sprouts.

Mung beans have long been produced and eaten by locals in Bangladesh. In Bangladesh, a trial -harvest of mung beans started in 2010. After the implementation of a feasibility study on the contribution of a “development import plan demonstration project” supported by the Japan External Trade Organization (JETRO) in 2010,  large-scale harvest and exports to Japan began in 2012.

Grameen euglena also opens multiple channels for farmers to sell their mung beans. According to their report, the income of local farmers has increased since they joined euglena Co.’s mung bean project. Along with this, euglena Co. has also initiated several training programs for farmers and provided a mobile app for them to measure their field land area for more efficient land management.

Since 2018, the number of farmers involved in the project has exceeded 8,600. Furthermore, women were actively involved in this project, participating in the harvesting, dust removal and sorting process.

The company contributes by selling mung beans to a World Food Programme (WFP) project funded by the Government of Japan, which distributes mung beans to Rohingya refugees via e-vouchers given by WFP.

Eliminating malnutrition and poverty has been the goal of the company since its foundation. “I realized, that the most serious problem when it comes to food security is not starvation, but malnutrition. That’s why I decided to found a company to solve nutritional deficiency problems in Bangladesh and improve the income of farmers in the country,” says Mitsuru Izumo, founder and CEO of euglena Co.

“This initiative by euglena Co. and Grameen euglena contribute to improving the lives of low-income people in Bangladesh through generating job opportunities for farmers, increasing their income and enhancing nutrition with the cultivation of technology for better crop yield and quality of mung beans. The company thus engages low-income people both as customers and producers and contributes to several Sustainable Development Goals through its business model” says Luciana Aguiar, the head of Business Call to Action.

About euglena Co., Ltd.: euglena Co., Ltd. is the first biotechnology venture company in the world that succeeded in outdoor mass cultivation of microalgae Euglena in 2005. The company strives to solve the global food and environmental issues through its business activities such as the research and development, production and sale of Euglena. The scope of business of the company leveraged on the technology stretches from healthcare (food and cosmetics) to energy and environment (bio diesel fuel and bio aviation fuel). The company established a joint venture, Grameen euglena, with Grameen Group in 2014.