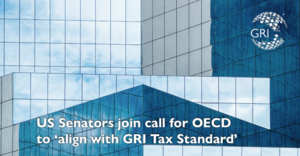 Mar. 20 /CSRwire/ - The response to the OECD’s consultation on updating their tax reporting framework has been supportive of adding public disclosure of country-by-country corporate tax payments. About 25% of the responses urged the OECD to align with GRI’s recently launched Tax Standard.

OECD’s Base Erosion Profit Shifting (BEPS) framework requires large companies in OECD countries to provide country-by-country data to tax authorities but not to the public. In their public consultation, which closed on 6 March, 21 of the 78 responses referred to the GRI Tax Standard in pressing for changes to make disclosures publicly available.

One notable submission, signed by 33 lawmakers from the United States Congress and Senate, endorsed the new Tax Standard (GRI 207) by calling on the OECD to ensure reporting is ‘aligned with the Global Reporting Initiative.’ Quoting from this submission:

GRI developed this standard in consultation with multinational corporations, accounting firms, academics, and other stakeholders in addition to investors. Broadly speaking, aligning the various country-by-country standards would ease recordkeeping burdens for businesses and present a clearer picture to users of these reports.”

“It’s highly significant that so many influential organizations and individuals are pressing for the OECD to incorporate our newly released Tax Standard. For more than twenty years, GRI has led the movement for corporate transparency. We know that public disclosure works. It informs stakeholders and thus drives corporate accountability.

With increasing evidence of significant corporate tax avoidance across the world, it is essential all stakeholders have access to information on the taxes paid by businesses in the locations where they operate. These lost payments should be used to advance sustainability and public wellbeing in the societies where the taxes were due.

Since GRI launched the first tax transparency standard in December, investors, civil society groups and many others have signalled their support. Backing from high-profile US Senators and Members of Congress shows that the international consensus from policy makers continues to grow.

I strongly encourage the OECD to incorporate our Tax Standard into their revision of the BEPS framework and require public disclosure. This standard, like all GRI Standards, was developed through an independent, multi-stakeholder process and thus reflects the global best practice for country-by-country tax reporting.”

The responses received to the OECD/G20 BEPS Project Public consultation, Review of Country-by-Country Reporting (BEPS Action 13), have been published online. See GRI’s own response and that of the Tax Standard Technical Committee.

The GRI Tax Standard goes beyond BEPS in its current form, as it supports organizations to provide public reporting – making tax information available to all stakeholders (and not just private submissions to tax administrations).

GRI 207: Tax 2019 is the first global reporting standard to combine management approach disclosures on tax strategy with public country-by-country reporting of business activities, revenues, profit and tax. It is freely available to be used by any organization.

When launched in December 2019, the Tax Standard received strong backing from different stakeholder groups, including global investors. High interest was also shown through an event at the London Stock Exchange in January.

The Global Reporting Initiative (GRI) is the independent international organization that helps businesses and other organizations understand and communicate their impacts. The GRI Standards are the world’s most widely used for sustainability reporting.

The Global Reporting Initiative's (GRI) vision is that reporting on economic, environmental, and social performance by all organizations becomes as routine and comparable as financial reporting. GRI accomplishes this vision by developing, continually improving, and building ca...