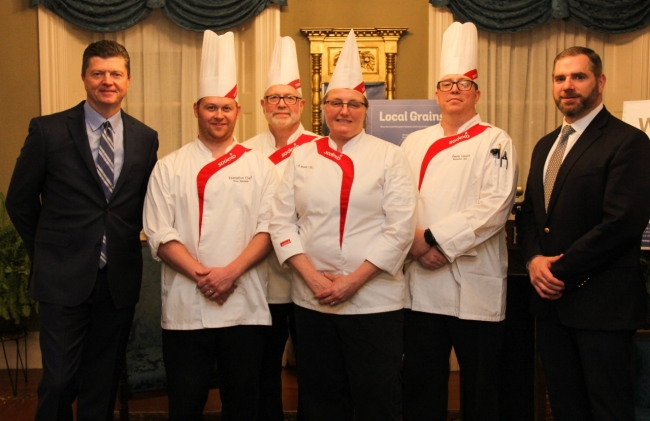 Sodexo, a food services and facilities management company committed to improving Quality of Life, has achieved serving 100% Gulf of Maine Responsibly Harvested® white fish at all of its Maine locations. The achievement comes after five years of shifting all white fish purchasing to this ecolabel in partnership with the Gulf of Maine Research Institute (GMRI). Sodexo’s managers, chefs, and clients celebrated the achievement with GMRI along with local fisher-people, farmers and other vendors at the governor’s mansion, the Blaine House, on February 27.

“Choosing a wider variety of fish is good for fishermen, good for the ecosystem and good for our health,” says Kyle Foley, senior program manager of the Gulf of Maine Research Institute's Sustainable Seafood Program.

Purchasing responsibly harvested seafood helps the Gulf by focusing on fishing overabundant species. These species are considered “underloved,” meaning they’re less familiar to consumers, which leads to low prices and lost opportunity for fisher-people. Sodexo has been focused on raising awareness of underloved seafood throughout the state, especially with its college-aged guests.

In celebrating this achievement, Sodexo is further announcing a new commitment within the Maine Course. Over the next five years, all Sodexo sites in Maine will double the number of menu items that include grains, commit to using local grains in those dishes, and increase local grain purchasing by 50%.

According to Tristan Noyes, Executive Director of the Maine Grain Alliance, rediscovering how to grow, cook, and eat locally-grown grains is an important safeguard in the face of climate change. By purchasing local grain, Sodexo is helping to foster a grain economy that is both good for people and good for the planet.

Sodexo is contributing to the Maine grain community, which has seen a revitalization in recent years. These partners are addressing key issues: feeding our communities, creating jobs, and making farming more viable in Maine.

Sodexo’s new commitment includes sourcing local grains, legumes, beans, and pulses from within Maine. In 2019 Sodexo shifted to only serving cookies baked from scratch with local Maine flour and other local ingredients in all of its college dining halls.

Sodexo Group
Founded in 1966 by Pierre Bellon, Sodexo is the global leader in services that improve Quality of Life, an essential factor in individual and organizational performance. Operating in 80 countries, Sodexo serves 75 million consumers each day through its unique combination of On-site Services, Benefits and Rewards Services and Personal and Home Services. Through its more than 100 services, Sodexo provides clients an integrated offering developed over more than 45 years of experience: from reception, safety, maintenance and cleaning, to foodservices and facilities and equipment management; from Meal Pass, Gift Pass and Mobility Pass benefits for employees to in-home assistance and concierge services. Sodexo’s success and performance are founded on its independence, its sustainable business model and its ability to continuously develop and engage its 420,000 employees throughout the world.