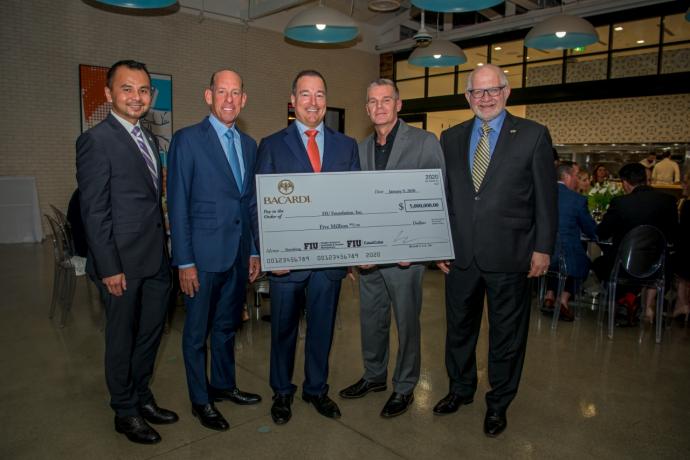 FIU’s Chaplin School of Hospitality & Tourism Management has announced a $5 million gift from Bacardi USA dedicated to a new and unique educational program tailored for the spirits industry. The gift will create the Bacardi Center of Excellence, which will position the top-ranked school as a leader in beverage management education and partner with one of the world’s most historic and leading spirits companies.

The Bacardi Center of Excellence will provide student scholarship opportunities, promote community events and provide pathways to entrepreneurship. The Bacardi Beverage Innovation Fund will be used to establish a beverage curriculum and create collaboration opportunities between Bacardi USA and FIU faculty. The Bacardi Scholarship Endowment will offer students financial assistance and establish professorships.

The gift also expands programming at FIU’s CasaCuba. CasaCuba seeks to provide a dynamic home for the discussion and study of Cuban affairs - history, policy and business - and the celebration of Cuban culture. The initiative is bringing together scholars, policymakers, business leaders, students, and the community at large to realize a multidimensional Cuban cultural center and think tank that will be housed in a state-of-the-art facility at FIU’s Modesto Maidique campus. Family-owned Bacardi was originally founded by Don Facundo Bacardí Massó in Santiago de Cuba in 1862. Today, Bacardi Limited is the largest privately held spirits companies in the world and South Florida is home to the regional headquarters for North America.

"At FIU we are proud to partner with Bacardi, a company with deep roots in our community and a legacy of success that goes back to Cuba more than a century ago," said FIU President Mark B. Rosenberg. "This gift will fuel a perfect combination of tradition and forward-looking projects that will benefit our students and the entire community for generations."

"We are proud to strengthen the hospitality and tourism management work at FIU while connecting with the future talent of this industry," said Pete Carr, President of Bacardi North America. "As a company proud of its Cuba origins, we are excited to support CasaCuba and help spotlight the culture that is forever a part of our story."

In addition to the Bacardi Center of Excellence and the Bacardi Beverage Innovation Fund, Bacardi USA’s $5 million gift will also create the Bacardi Classroom, a Bacardi Spirits Management Track, and BacardiTeach, which includes micro-credentialing opportunities for FIU students, Bacardi employees, on-premise partners and branded educational programs for bartenders. The Bacardi Scholarship Endowment will support the previously mentioned initiatives, as well as the Bacardi Scholars, a multiyear blended scholarship program.

“Our partnership with Bacardi USA will positively affect our university, our school’s programs, and the hospitality industry, plus it will greatly enhance the hands-on learning experience for our students,” said Michael Cheng, dean of the Chaplin School. “We are honored to be part of a relationship that will leave a lasting impact.”

“We greatly appreciate Bacardi USA making such a sizeable investment supporting the FIU Chaplin School of Hospitality & Tourism Management,” said Wayne Chaplin, chief executive officer for Southern Glazer’s Wine & Spirits and a member of the family for which the school is named. “Giving back in the communities we serve and advancing educational opportunities for future leaders in the hospitality industry are values that Southern Glazer’s and Bacardi USA have in common. This gift will go a long way to further enrich the world-class beverage education program at the school that my family and Southern Glazer’s have been proud to support.”

Founded more than 158 years ago, in Santiago de Cuba on February 4, 1862, family-owned Bacardi Limited currently employs more than 7,000, operates more than 20 production facilities, including bottling, distilling and manufacturing sites in 11 countries, and sells its brands in more than 170 countries. Bacardi Limited refers to the Bacardi group of companies, including Bacardi International Limited. Visitwww.bacardilimited.com or follow us on Twitter @BacardiLimited or Instagram @BacardiLimited1862.

About the Chaplin School of Hospitality & Tourism Management:
Florida International University's Chaplin School of Hospitality & Tourism Management is distinguished as one of the top hospitality programs in the United States and the world. It is ranked in the top 50 globally, #1 for its online program, #1 in the Southeast region of the U.S., and it is best in value. More than 2,000 undergraduate and graduate students from across the nation and around the globe choose FIU for its outstanding reputation, advantageous campus locations in Miami, expert faculty, rich curriculum and fast-track career opportunities in the international hotel, foodservice and tourism industries. In August 2006 FIU unveiled the first U.S. school of hospitality and tourism in Tianjin, China. The Marriott Tianjin China Program, ranked #1 in China, is FIU's largest international program, with a capacity for up to 1,000 students. For more information about Florida International University's School of Hospitality & Tourism Management, visit http://hospitality.fiu.edu/.

About CasaCuba:
CasaCuba at Florida International University is bringing together scholars, policymakers, business leaders, students, and the community at large to realize a multidimensional Cuban cultural center and think tank that facilitates the discussion and study of Cuban affairs - history, policy, business - and the celebration of the Cuban experience. CasaCuba has attracted influential board members, recruited a uniquely qualified team, obtained a prominent land donation from FIU, and received significant philanthropic support, including prestigious grants from the National Endowment for the Humanities and the John S. and James L. Knight Foundation. The iconic and state-of-the-art center is projected to break ground in 2021 and open in 2023. CasaCuba will feature galleries for interactive exhibits, as well as a state-of-the-art venue for events, performances, and dynamic programming. For more information: https://casacuba.fiu.edu/

About FIU:
Florida International University is Miami’s public research university, focused on student success. According to U.S. News and World Report, FIU has 42 top-50 rankings in the nation among public universities. FIU is a top U.S. research university (R1), with more than $200 million in annual expenditures. FIU ranks 15th in the nation among public universities for patent production, which drives innovation, and is one of the institutions that helps make Florida the top state for higher education. The Next Horizon fundraising campaign is furthering FIU’s commitment to providing students Worlds Ahead opportunities. Today, FIU has two campuses and multiple centers, and supports artistic and cultural engagement through its three museums: Patricia & Phillip Frost Art Museum, the Wolfsonian-FIU, and the Jewish Museum of Florida-FIU. FIU is a member of Conference USA, with more than 400 student-athletes participating in 18 sports. The university has awarded more than 330,000 degrees to many leaders in South Florida and beyond. For more information about FIU, visit www.fiu.edu.