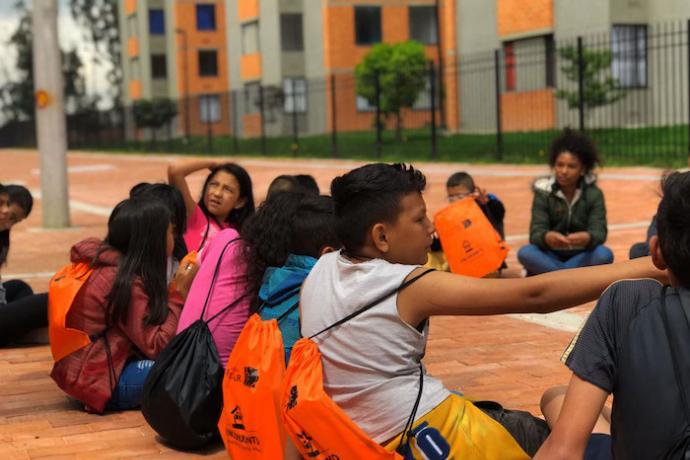 Construction company Constructora Bolívar has joined Business Call to Action with a commitment to improve the quality of life of more than 190,000 low-income families – or around 600,000 people – through the construction of affordable and decent housing, while also improving their standard of living by connecting them to public services, shared recreational areas and roads, by 2022.

Currently more than half of the world’s population lives in urban areas, and by 2050, it is estimated this figure will rise to 70 percent. This trend is not foreign to Colombia – already more than 75 percent of people live in the country’s cities. However, Colombian cities have tended to take a reactive, rather than proactive, approach to the challenges of urbanization, which has resulted in increased spatial, social and economic segregation.

To address this, some Colombian cities have developed real estate projects that promote horizontal property development[AB1]  (low cost condominiums), which addresses the lack of public space, affordable and decent housing and access to other infrastructure that often plagues urban development. Often those who are hit hardest are low income earners, who are priced out of the housing market.

To help tackle this, Constructora Bolivar specialises in urban projects that serve all socio-economic backgrounds, with over 280 housing projects and one hotel business in Colombia. An impressive 85 percent of its urban housing projects are ‘social housing’, which is means they are built to guarantee the right to housing of low-income households.

This type of housing can be accessed by Colombian families whose income ranges from one to four times the legal monthly minimum wage. The National Government provides a cash subsidy that is delivered only once per beneficiary through the Family Compensation Funds. Customers must pay an initial fee which equates 30 percent of the value of the property, which must be paid over the construction period. The remaining 70 percent is covered by a mortgage loan and the subsidy granted by the government.

Alongside this, Constructora Bolívar has worked during 20 years with more than 30 public and private allies in the creation of social capital for communities, reflected in projects aimed at solving everyday problems such as insecurity, bad coexistence within neighbours and noise pollution, which affect the daily life of the people who inhabit the co-properties.

Constructora Bolivar promotes the peaceful resolution of conflicts within and outside co-ownership, strengthening neighbourhood relations and healthy coexistence, especially in spaces for community integration. The company supports recycling, the reasonable use of public services and natural resources, the good management of pets and the management of disaster risks in the groups, promoting resilient, responsible and environmentally sustainable communities.

Also promotes the good use of the economic resources of families and of co-ownership, the knowledge of the horizontal property law and the promotion of good practices of corporate governance in the groups, contributing through knowledge to stability financial and administrative aspects of the co-ownership.

The clients not only receive a housing unit that complies with all safety and quality standards required by Colombian regulations, but also access to urban infrastructure, such as roads, parks, public spaces and other common areas. This aspect is highly valued by clients as many of them come from rural areas or who have lived in informal housing.

“Safety, coexistence and sustainability, both economic and environmental, have become priorities in urban development processes, and the responses to these challenges must be found in the communities themselves to support and scale them,” said Carlos Arango CEO of, Constructora Bolivar.

This initiative benefits both the client and the business. Not only does the company work with clients to help them understand horizontal property laws and principles, it also works to build a sense of community and confidence in its housing projects by ensuring there is sufficient shared community space and infrastructure.

“This contributes to improving coexistence, safety, environmental sustainability and the administration of residential complexes,” says. “It also adds value to our commercial offer, as through our portfolio of projects we build long-term relationships and positive emotional bonds with our clients that later become members of the community.

“This is an excellent example of how to tackle the challenges of increasing urban density, where most often it is the low-income earners who are the ones left behind. By ensuring that low income earners can still afford their own homes, and complementing this with responsible urban development, Constructora Bolivar is making considerable contributions to the Sustainable Development Goals,” said Head of BCtA, Luciana Aguiar

About Constructora Bolivar:  Housing company Constructora Bolivar builds affordable and decent housing for the Colombian population under the principles of social responsibility, economic viability and care for the environment. Constructora Bolivar S.A, is a member of The Bolivar Group, which has been operating for over 70 years and is comprised of companies from various sectors, including financial, insurance, and construction.