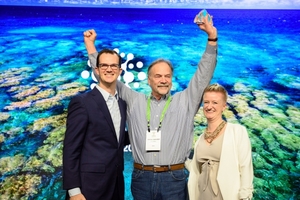 “Wendell just celebrated his 40th year anniversary with Interface, and has always been a model steward for Ray’s vision, Interface’s journey to sustainability and for protecting our environment for future generations,” said Harriet Anderson Langford, trustee for the Ray C. Anderson Foundation, and president of The Ray.

“Wendell was one of the first movers in an initiative to find the best way to honor and memorialize Ray’s contributions to the community in his native Troup County after his passing,” Harriet said. “It started with Wendell’s idea to name a road after Ray in the industrial park, and then we decided to go bigger and approach Governor Deal about naming a segment of I-85 after Ray.  In the end, Wendell’s initial idea came to fruition large-scale when 18 miles of 1-85 in Georgia were designated as the Ray C. Anderson Memorial Highway in 2015, now called The Ray.”

“If you think about the way The Ray came into being, it’s like Interface and the Foundation were brothers, and Wendell was the first cousin,” said Harriet. “Wendell is family, and we are elated to celebrate with him on his milestone anniversary and for the presentation of the Ray C. Anderson Sustainability Award.”