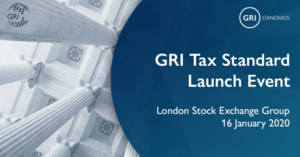 Jan. 17 /CSRwire/ - The increasing number of inquiries into the tax practices of corporations demonstrates why a transition towards transparent tax disclosure is urgently required.

This was a key message from Elise J Bean, former United States Senate tax investigator, as she addressed an event in London today to highlight GRI’s launch of the world’s first country-by-country public reporting standard for tax. Governments around the world, including several EU countries and Australia, are currently reviewing the tax practices of multinationals.

The GRI Tax Standard responds to concerns over the impact corporate tax avoidance has on the ability of governments to fund services and support sustainable development. It is now available as the latest addition to the GRI Standards, the most widely used sustainability reporting framework.

During 15 years with the Senate Permanent Subcommittee on Investigations, Ms Bean handled high-profile investigations, hearings and legislation on tax avoidance, corporate misconduct and financial corruption. Setting out why global change is needed in support of tax transparency, she said:

“Corporate tax transparency is the next big sustainability task. In 2018, at least 90 hugely profitable US corporations paid no US tax at all – an outrage that is not sustainable morally or in light of the societal investments needed worldwide.

Companies need to pay their fair share, and the new GRI Tax Standard will encourage responsible corporations to do just that. Not only because it’s the right thing to do but because it is in their self-interest to help provide the revenue needed to sustain the economy and restore public confidence in the business world."

“GRI’s Tax Standard can be a game changer. For the first time, we have a global standard that can ensure companies demonstrate effectively how they contribute through taxes in each of the locations where they operate. This crucial information is needed if we are to have a well-informed global debate about corporate tax practices.

I thank Elise J Bean for her insights, which underlines the urgency, international relevance and practical application of the Standard. I think companies themselves are recognizing that changes are needed and GRI looks forward to working closely with them, to encourage uptake of the Tax Standard and help them unlock the benefits that come from committing to transparency.”

Watch the recording of the GRI’s event at the London Stock Exchange Group (LSEG), which included addresses by Waqas Samad (Group Director of Information Services at LSEG), Elise J Bean and Tim Mohin. It was followed by a panel discussion, moderated by Judy Kuszewski (chair of GRI’s Global Sustainability Standards Board) with:

GRI 207: Tax 2019 is freely available for use by any organization. It’s publication received widespread support from many stakeholders.

For nearly 30 years Elise J Bean worked as an investigator for Senator Carl Levin. From 2003 to 2014 she was Staff Director and Chief Counsel, US Senate Permanent Subcommittee on Investigations. She is author of ‘Financial Exposure: Carl Levin’s Senate Investigations into Finance and Tax Abuse’.

A study from the Institute on Taxation & Economic Policy (published in December) found 91 companies in the Fortune 500 did not pay federal income taxes on their 2018 US income.

The Global Reporting Initiative (GRI) is the independent international organization that helps businesses and other organizations understand and communicate their sustainability impacts.

The Global Reporting Initiative's (GRI) vision is that reporting on economic, environmental, and social performance by all organizations becomes as routine and comparable as financial reporting. GRI accomplishes this vision by developing, continually improving, and building ca...