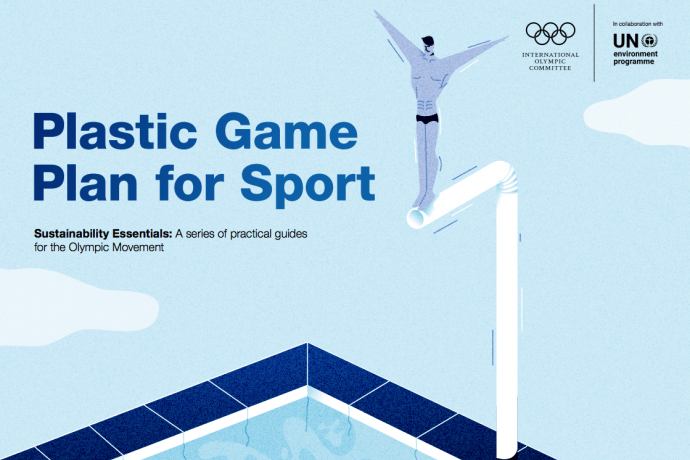 The guide, entitled Plastic Game Plan for Sport, was published in collaboration with UN Environment and includes contributions from World Sailing. Referencing successful examples from across the sports world, it provides guidance to event organisers on creating an effective plan to reduce plastic waste. This includes key steps such as eliminating single-use plastic items, reducing the amount of plastic used, reusing plastic items and recycling.

“Plastic pollution is one of the biggest challenges facing our environment today and sport – like any other industry – has an urgent responsibility to address it,” said Marie Sallois, IOC Director of Corporate and Sustainable Development. “The IOC’s Plastic Game Plan for Sport aims to provide sports organisations, event organisers, athletes and fans with clear, step-by-step guidance on how to eliminate plastic waste from their operations and everyday lives.”

The guide’s recommendations include introducing reusable or compostable cups and tableware at events, providing water refill points, recycling bins and reducing the use of ‘hidden plastic’ such as merchandise, signage, branding and ticketing. In addition, the guide encourages event organisers to leverage their reach to raise awareness of plastic pollution. It also offers tips for athletes and fans on how to cut down their own plastic waste and inspire others to do the same.

In line with Olympic Agenda 2020 – the strategic roadmap for the future of the Olympic Movement – the IOC has committed to driving sustainable practices across the International Sports Federations (IFs), National Olympic Committees (NOCs), and the wider sports community. The IOC itself is reducing waste at its headquarters and is working with suppliers to ensure materials used at its events are sourced responsibly.

In June 2018, the IOC joined the UN Environment's Clean Seas campaign to fight plastic pollution in the oceans, calling on the entire Olympic Movement to follow suit. Eleven IFs, four NOCs and three commercial partners have so far committed to the initiative, putting concrete measures in place to reduce plastic waste.

In September 2019, the IOC supported the Big Plastic Pledge campaign, launched by Olympic sailing champion Hannah Mills. The campaign calls on athletes and fans to reduce their use of single-use plastic. Almost 200 elite athletes have signed the pledge so far, committing to reducing plastic use in their own lives and encouraging others to do the same.

The Plastic Game Plan for Sport is the latest instalment in the IOC’s ‘Sustainability Essentials’ series, which provides practical guidance on key aspects of sustainability for NOCs, IFs and other sports organisations. Previous guides in the series include Introduction to sustainability, Sports for climate action and Sustainable sourcing in sport.