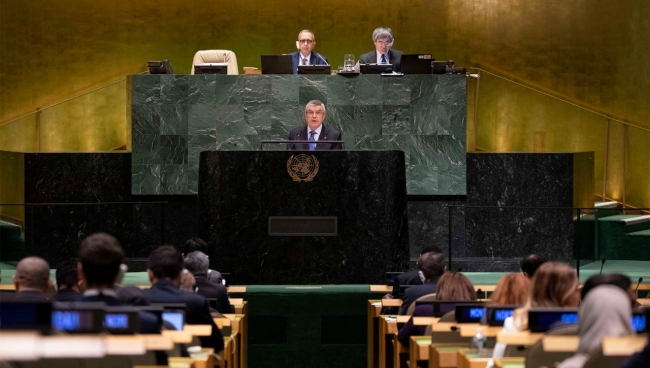 “The Olympic Games are the only event today that brings the entire world together in peaceful competition,” he said.

Emphasising the shared values on which the United Nations and the IOC are built, President Bach highlighted the importance of peace, solidarity and respect in a fast-changing world.

“In our fragile world, we see our shared values and principles challenged in many ways, not only in the international community but also in sport,” said the IOC President: “The IOC is fully committed to preserving and strengthening these values and principles of respect for the rule of law, solidarity and political neutrality. But our commitment is not enough. We depend on the support of you, the governments, for our mission and our neutrality”.

He continued: “This is why we are so grateful for your support for the Olympic Truce resolution. With this resolution, you are also supporting these values and principles that unite us. “In this Olympic spirit of universality, solidarity and peace, I invite you all to join hands and to celebrate our unity in all our diversity at the Olympic Games Tokyo 2020 and beyond. Let us demonstrate together that our shared humanity is stronger than all the forces that want to divide us”.

The consensus for the Olympic Truce resolution included the future hosts of the Olympic Games: China, France, the United States of America and Italy.

The resolution calls for the Olympic Truce to be respected from seven days before the start of the Olympic Games in July 2020 until seven days after the Paralympic Games, and to use this opportunity to harness sport to foster and encourage concrete action that promotes dialogue and reconciliation during the Games and beyond. By adopting this resolution, the international community at the United Nations recognises the power of sport and the relevance of the Olympic Games to bring the world together in peaceful competition, providing hope for a better future.

The resolution was formally submitted to the General Assembly by the President of the Tokyo 2020 Organising Committee, Yoshiro Mori, on behalf of the government of Japan and the Olympic Movement.

In his speech, President Mori said: “The Olympic Truce Resolution is the embodiment of the shared hope of people across the world that we can realise a world with no conflicts at least during the Olympic and Paralympic Games and that we can live together by fostering mutual understanding and respect with ‘unity in diversity’”.

“By making the impossible possible in sport, our hope is that wars will disappear from the globe forever, and not only during the Olympic Games,” Mori concluded.

Adding to the support for the Truce Resolution was Monaco, which is the Co-Chair of the United Nations Group of Friends of Sport. Addressing the UN General Assembly, its Ambassador, Isabelle Picco, said: “With its Olympic Agenda 2020 reforms, the IOC has taken measures to make the candidature process for the Olympic Games more sustainable in the long term. And with its long-standing action in support of peace, gender equality and the fight against all forms of discrimination, the IOC has become an unrivalled force”.

The tradition of the Olympic Truce – “Ekecheira” – has been to ensure a halt of all hostilities, allowing the safe passage and participation of athletes and spectators taking part in the Olympic Games. The resolution reaffirms that the Olympic values of peace, solidarity and respect are as important across the world today as they were over 3,000 years ago, when the ancient Olympic Games first took place in Greece.

The main objectives pursued by the IOC through the Olympic Truce are to mobilise youth for the promotion of the Olympic ideal, to use sport to help build bridges between communities in conflict, and, more generally, to create a window of opportunity for dialogue and reconciliation.

Complete text of the resolution.

Learn more about the Olympic Truce.