Feeding the Soil that Feeds Families on #WorldSoilDay 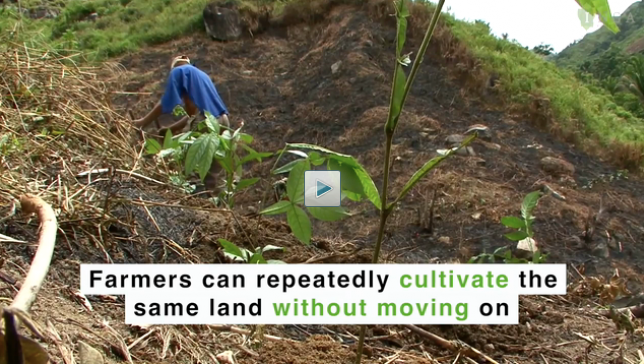 The NextGen Committee of the Ray C. Anderson Foundation has awarded a $100,000 grant to The Inga Foundation for their “Land for Life” program.

The Ray C. Anderson Foundation is a private family foundation that was launched in 2012 to celebrate the legacy of Ray C. Anderson (1934-2011), a globally known industrialist turned environmentalist that was once named the “Greenest CEO” by Fortune magazine and a “Hero of the Environment” by TIME.

The Foundation’s NextGen Committee is comprised of Ray’s five grandchildren and their spouses. Since 2014, the Committee has taken an active role in perpetuating Ray’s legacy by investing in projects geared to make the world a better place for “Tomorrow’s Children.” Over the past seven years, the committee has funded more than $400,000 in programs with focus ranging from conservation to climate change education, to urban agriculture, and now, agroforestry.

The Land for Life model offers families in Honduras (and all of the humid tropics as there are 300+ native Inga species) increased soil fertility with no chemical fertilizers/pesticides/herbicides or heavy equipment--ensuring good harvests, long-term food security and improved income potential, on the same plot of land--without the need to slash and burn fresh land.

Since 2012, the debt-free, bottom-up, low-cost, and scientifically proven agroforestry model led by local foresters, field directors and nursery staff in Honduras has enabled 300 families to organically and sustainably grow their food crops. Livelihoods have improved and the farmers are able to provide ample food for their families and then sell additional organic cash crops (i.e. pepper, turmeric, cacao and vanilla) for steady income.

Over three million resilient Inga trees have been planted, many on steep, degraded slopes.  Inga trees are a nitrogen-fixing tree species which maintain soil fertility and good harvests year after year, thereby breaking the cycle of slash-and-burn.  The trees have sequestered carbon, preserved rainforests and their biodiversity and wildlife habitats, protected water sources, restored ecosystems and prevented erosion from mudslides.

McCall Langford, the 2019 chair of the NextGen Committee, says The Inga Foundation’s Land for Life program was chosen to receive the grant not only for its carbon sequestration potential, but also for the fact that the project provides so many additional “beyond carbon” benefits that align well with the United Nations Sustainable Development Goals (SDGs).

“This project has immense capability to help repair the fragile ecosystem and put carbon back into balance in the rainforests of Honduras and beyond,” Langford said. “It delivers key social and economic services back into the communities that need it the most. That is why the Inga Foundation’s grant proposal was so attractive to us. We are thrilled that these families can stay on their land, remain in their existing homes, feed their families and earn the income they need to be successful, without becoming ‘climate refugees’ as a result of increasing instances of extreme weather conditions.”

"If you restore the soil, the ecosystem will restore itself." Mike Hands, founder and director of Inga Foundation

Inga Foundation founder and director, Mike Hands says the NextGen grant will allow Inga Foundation to allocate much needed funds to capital investment projects that will provide the Honduras team with the tools and technologies necessary to advance more of the 300 farming families from Stage One: basic food security, to Stages Two and Three: Cash crops and fruit trees for steady incomes.

“We have many farmers who are ready to move to the cash crop stage,” Hands said, “but we need solar panels and dryers to increase the nursery area enough to help move more cash crop seedlings into the production stage. These kinds of capital investments are now possible with the NextGen grant.”

Hands noted that as more fruit trees are added into the cash crop mix, native hardwoods can also be produced and planted among them, eventually creating many more “little forests” that will eventually connect with each other, to recreate the majestic rainforest that once stood on the currently barren landscape.

“The NextGen grant is enabling the Inga Foundation to work with farmers to set longer term goals of preserving iconic tree species and bringing back endangered species that have not been seen in the area for quite some time,” Hands said.

“As those new trees mature, we will be able to educate the farmers in sustainable forestry practices, which will further increase their income and boost the overall economic situation in that region of Honduras and beyond. On the horizon, we have the potential to reconnect two genetically isolated rainforests. That’s huge. If we are successful, it would be the first documented example of fragmented rainforests in repair.”

About the NextGen Committee

Ray C. Anderson’s five grandchildren, along with their spouses, comprise the NextGen Committee. The Committee makes recommendations to the Board of Trustees for worthwhile grants and initiatives. Over the past couple of years, the Committee has decided to focus its philanthropic efforts on programs that help reverse global warming.

About the Inga Foundation

The Inga Foundation is pioneering the revolutionary agricultural/regenerative system of Inga alley cropping to address food insecurity and rainforest destruction. Mike Hands of Cambridge University developed the “Land for Life” project after 20 years of scientific research into slash-and-burn farming which required field trials of hundreds of tree species, and demonstration/trial farms. Inga alley cropping using nitrogen-fixing tree species from the Inga genus which maintain soil fertility and good harvests year after year, thereby breaking the cycle of slash-and-burn and allowing families in the entire tropics to gain long-term food security on one piece of land.