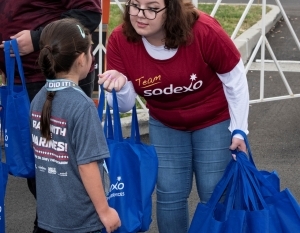 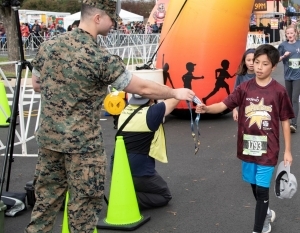 The marathon brings together runners from all walks of life to participate in a patriotic race and a weekend of family-friendly activities. More than 3,600 kids participated in the MCM Kids Run this year, including students from Washington, D.C. metropolitan area schools that joined the run as part of the Healthy School Award challenge. The top five schools with the most registered student participants received the Healthy School Award, and equally share a $5,000 contribution to the schools' physical education departments from Sodexo, the challenge's sponsor.

According to the U.S. Department of Health and Human Services, the national recommendation is that children and adolescents aged 6 to 17 years should have one hour or more of physical activity each day, but the President's Council on Fitness tells us that only one in three children are physically active every day.

As each child crossed the finish line, Sodexo provided a nutritious snack for the children to enjoy and then invited them to visit its activity tent. This popular post-race hangout featured a variety of activities focused on keeping kids' minds and bodies active, including:

With more than 40 years of experience working municipal, state, federal and military clients, Sodexo's Government segment and its nearly 3,000 employees improve the Quality of Life for the people it serves at 150 military and U.S. Federal Government locations in 26 states. Headquartered in the Washington, D.C. metropolitan area, Sodexo provides a variety of integrated food and facilities management solutions and is the nation's largest federal foodservice contractor – serving 45.6 million meals annually with a focus on wellness and nutrition.