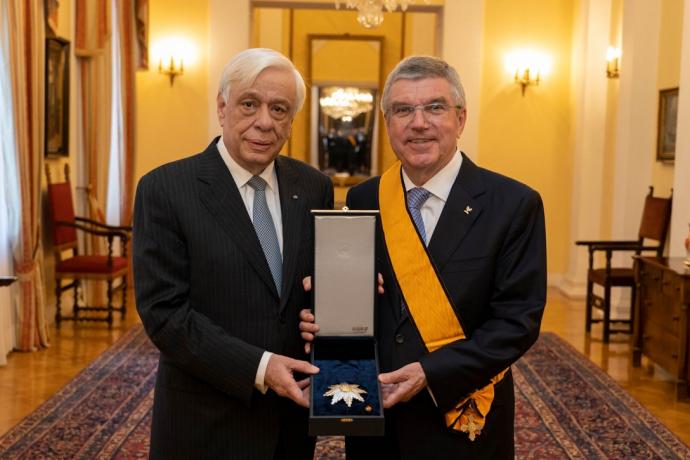 Speaking at the ceremony, Greek President Pavlopoulos expressed his appreciation of the IOC President’s “exemplary services in favour of the values and principles of the Olympic spirit and ideals”.

“Under your presidency, the Olympic Games transcendently express these values and principles and are therefore aimed at all of humanity,” he said.

“Your presidency of the International Olympic Committee renders a great service to the whole world and to human beings because you act for the benefit of peace, democracy and civilisation. We Greeks are historical guardians of the ancient traditions of classical Olympism, and we commend your steadfast commitment to the Olympic spirit and the ideals of Olympism. It is a commitment that you demonstrate in everything you do.”

Accepting the award, IOC President Thomas Bach said: “I am particularly touched to receive this distinction knowing that it is an honour that was also bestowed by the Hellenic Republic on my predecessor, the renovator of the Olympic Games, Baron Pierre de Coubertin”.

The ceremony was attended by members of the Greek Olympic family, headed by Spyros Capralos, IOC Member in Greece and President of the Hellenic Olympic Committee,  George Papandreou, former Prime Minister of the Hellenic Republic, and ministers and government officials. The Mayor of Olympia, Georgios Georgiopoulos, was also present during the event.