Policymakers are turning up the temperature on climate change. 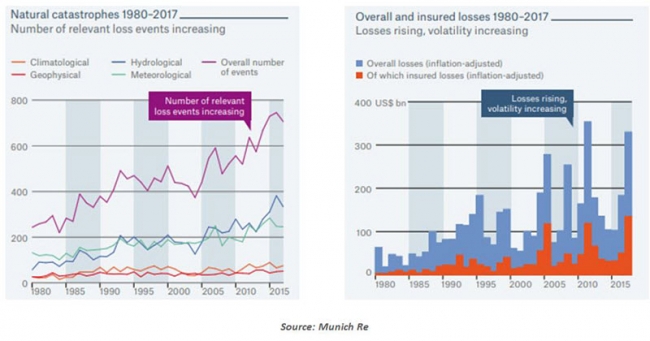 Mark Carney has a lot on his mind.  As Governor of the Bank of England, Carney has to steer the British economy through the Brexit transition.  With the terms and timing of Brexit still very much a mystery, setting an appropriate monetary course is a difficult task.  As if that weren’t enough, Carney’s tenure at the Bank of England concludes in January 2020, so (unless his term is extended again) he’ll soon need to prepare a transition for his successor.

Across the pond, Robert Kaplan is president and CEO of the Federal Reserve Bank of Dallas.  As a contributor to the Federal Open Market Committee, Kaplan helps determine the course of U.S. monetary policy.  With the terms and timing of an agreement between the U.S. and China still unclear, this is no easy task.  And if that weren’t enough, Kaplan’s district includes much of the American oil industry, which has had its highs and lows over the past several years.

Yet despite these full plates, both Carney and Kaplan have recently weighed in on an issue that might not immediately appear central to central banking: climate change.  To some, this is an overreach; to others, it is directly on point.

We’ve written about climate change in the past.  It remains a controversial topic; a recent YouGov poll revealed that segments of the world’s population do not accept the premise that the global climate is changing.  Others acknowledge change, but are doubtful that human beings are responsible.

What is not in question is the steady increase in frequency of natural disasters over the past 40 years.  Storms, floods and droughts have all increased in number and severity.  The costs to insurers have escalated, as have the costs to society.

Catastrophic climatic events have changed the physical and commercial landscapes of the affected areas.  As a result, the viability of residency and commerce in certain parts of the world has come under question.  This, in turn, will have an impact on asset values and financial markets.  That is why meteorological developments have become a concern for central banks, many of which view climate change as a threat to economic and financial stability.

Since 1889, when Northern Trust was founded in Chicago, we have aligned our efforts with our three guiding Principles That Endure: Service, Expertise, and Integrity. Together, they reflect the three cornerstones of business conduct which we strive to instil in our employees, whom we call partners, and to provide to our clients and the communities we serve worldwide.