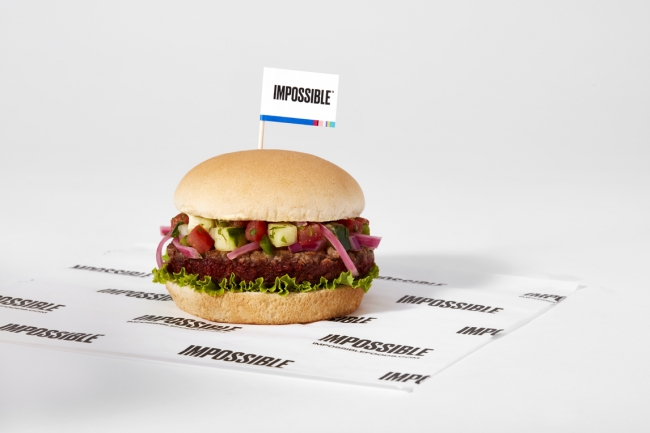 Sodexo debuts a new product line featuring the Impossible™ Burger, a burger made from plants that looks, cooks, and tastes like ground beef. The eight new menu items will be available at 1,500 of its 2,100 U.S. retail locations at universities, healthca

Sodexo, a food and facilities management company committed to improving Quality of Life, will debut a new product line featuring the Impossible™ Burger, a burger made from plants that looks, cooks, and tastes like ground beef, at more than 1,500 U.S. retail locations. The newly created menu will launch on Aug. 19 with eight plant-based products, including a sausage muffin sandwich, sausage gravy and biscuits, steakhouse burger and creole burger at colleges, universities, healthcare and corporate services accounts.

Sodexo’s decision to use and serve the Impossible™ Burger isn’t just a result of the meat-alternative’s award-winning taste and high consumer approval rating, but its environmental benefits. When compared alongside a traditional meat-based burger, the Impossible™ used 96 percent less land, 87 percent less water and 89 percent less GHG emissions, which helps to support Sodexo’s commitment to a Better Tomorrow.

“Sodexo is committed to providing customers with more plant-forward and sustainable options as part of their diet,” said Rob Morasco, senior director culinary development, Sodexo. “We are excited to expand our menu to include the Impossible™ Burger’s flavorful blend, which will be featured in several new products this fall.”

“We’re really thrilled to see that Sodexo’s culinary team is making unique and versatile dishes with the Impossible Burger,” says Dana Worth, Head of Sales at Impossible Foods. “Our ambitious mission to reach meat eaters could not be done without the delicious offerings like their breakfast sausage and burger combinations, and we look forward to seeing how diners react to them.”

The new Impossible™ product line is an example of Sodexo's "Love of Food," a consumer-centric approach that embraces fantastic food, healthy and balanced choices and culinary innovation among its team of global chefs. For more information, visit Sodexo USA.

Sodexo provides food service, accommodations and facilities management services to over 700 universities, colleges and independent schools in the United States. With more than 50 years of experience, Sodexo focuses on improving the student experience through integrated services that promote and enhance quality of life.

Sodexo North America is headquartered in the Washington, D.C., metropolitan area and is part of a global, Fortune 500 company with a presence in 100 countries. Sodexo is a leading provider of integrated food, facilities management and other services that enhance organizational performance, contribute to local communities and improve quality of life for millions of customers in corporate, education, healthcare, senior living, sports and leisure, government and other environments daily. The company employs 160,000 people at 13,000 sites in all 50 U.S. states and Canada and indirectly supports tens of thousands of jobs through its annual purchases of $9.2 billion in goods and services from small to large American businesses. Sodexo is committed to supporting diversity and inclusion and safety, while upholding the highest standards of corporate responsibility and ethical business conduct. In support of local communities across the U.S., the Sodexo Stop Hunger Foundation has contributed close to $32 million over the past 20 years to help feed children in America impacted by hunger. To learn more about Sodexo, visit SodexoUSA.com and connect with us on Facebook, Instagram, LinkedIn, Twitter and YouTube.