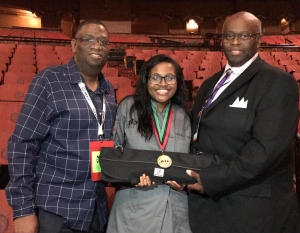 ACT-SO was designed to identify, encourage, reward and showcase the academic and artistic achievements of high school students of African descent. ACT-SO provides students with an opportunity to work with professionals in their area of interest.

Students receive mentoring and coaching from Sodexo chefs to create and develop individual projects for local competitions. Sodexo and ACT-SO have had a long-standing partnership since 2009 when the idea to develop the Culinary Arts Competition Category was initiated. It nourishes the culinary talent among high school students, from inner-city schools nationwide. In 2015 Sodexo was approached by ACT-SO to support them in adding a Hospitality category. These students build a team of three or four and develop a business plan on a new concept related to Hospitality.

ACT-SO has impacted thousands of students nationwide. “Each year we look forward to working with the many talented high school students interested in the culinary arts and hospitality fields. With the support of our leadership and mentoring efforts of Sodexo chefs we strive to create opportunities for students to challenge themselves to express the best of their talent” said Sodexo VP of Global Diversity and Inclusion Lourdes Diaz. “In partnership with CIA and NAACP ACT-SO, we are able to nurture an ongoing relationship among the students and inform them about all of the career opportunities they can enjoy within our company- nationally and internationally.”

Approximately 200 programs are sustained by ACT-SO nationally, providing a platform for professional and educational enrichment that has proven to be an impactful model for creating a pipeline to successful careers.

Sodexo partners with the Culinary Institute of America to provide scholarships to winning students. To date, more than $300,000 in scholarships and educational credit have been awarded to culinary and hospitality students.