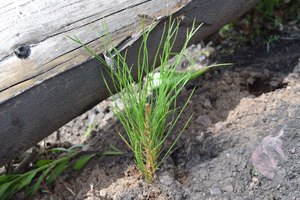 This year the NFF will be planting thousands of seedlings like these across California National Forests.

Since 2013, wildfires have burned more than five million acres in California alone. Fires in recent years have become so severe and burned such vast swaths of land, many forests will not naturally regenerate for decades, if at all. As a result, forests do not absorb carbon; watershed do not hold, clean, and gradually release water – including critical drinking supplies; wildlife lose their natural habitat; and more.

The NFF established the Fund as an opportunity for supporters to earmark their support specifically for California after a series of particularly severe wildfire and drought seasons. Reforestation in 2019 will include the Modoc and Lassen National Forests in northeastern California as well as the Angeles National Forest adjacent to Los Angeles. 2020 funds have not yet been allocated.

“It is inspiring to see how the passion and concern for California National Forests coalesce around this important cause” said Wes Swaffar, Director of Partnerships and Reforestation for the NFF. “With this support, we’re achieving measurable, tangible high-impact results for our forests, and restoring these amazing landscapes in California”.

The Fund also generated new multi-year commitments, including the cosmetics company Caudalie, who will be supporting California reforestation for the next three years.

While the Fund is concluded for now, the NFF won’t stop leading reforestation investments in California. The NFF works closely with the U.S. Forest Service to identify landscapes in need of reforestation and craft partnerships with businesses to help address those needs. Due to wildfires, insects and disease, numerous National Forests in California and beyond are facing large-scale reforestation needs.

The California Wildfire Reforestation Fund is an initiative of the NFF’s 50 Million for our Forests campaign, which is planting 50 million trees on our publicly-owned National Forests over five years.  For more information on this campaign go to https://www.nationalforests.org/get-involved/tree-planting-programs.

About The National Forest Foundation

The National Forest Foundation promotes the enhancement and public enjoyment of the 193-million-acre National Forest System. By directly engaging Americans and leveraging private and public funding, the NFF improves forest health and Americans’ outdoor experiences. The NFF’s programs inform millions of Americans about the importance of these treasured landscapes. Each year, the NFF restores fish and wildlife habitat, plants trees in areas affected by fires, insects and disease, improves recreational opportunities, and enables communities to steward their National Forests and Grasslands. Learn more at www.nationalforests.org.