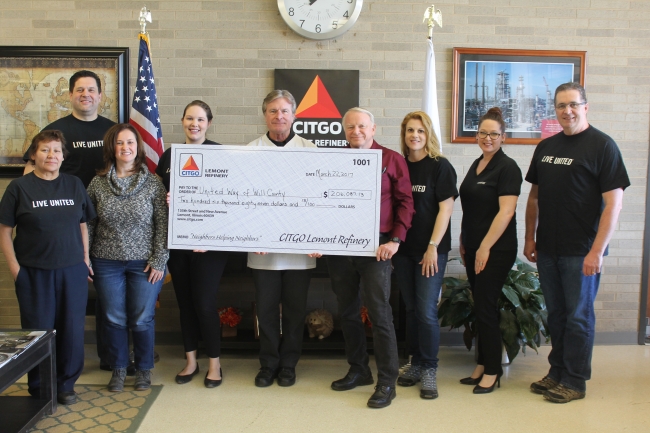 CITGO Lemont Refinery employees show their support for the United Way of Will County through their annual United Way campaign.

Recently, the CITGO Lemont Refinery held their annual United Way campaign – raising $206,087 in support of the 46 partner agencies that receive funding and guidance from the United Way of Will County.

"For many years CITGO and its employees have fueled the United Way’s mission of help and hope, and this year’s fundraising results are a perfect example of the company’s true dedication to support the communities in which it serves," said Mike Hennessy, president and CEO of the United Way of Will County.

According to Hennessy, CITGO is a corporate cornerstone in the United Way of Will County’s annual campaign, having raised more than $2 million over the past 17 years through employee contributions, corporate donations and various fundraising events.

While the campaign takes place once a year, support for the United Way by CITGO Lemont Refinery employees takes place year-round. Many employees choose to contribute through automatic payroll deductions each month – to ensure ongoing support for the programs and services. The dollars raised will be used to fund 109 specific programs that fall within the United Way’s four areas of impact: healthy lifestyles; safer communities; self-sufficiency; and youth success.

About the CITGO Lemont Refinery
For over 90 years, CITGO Lemont Refinery has employed more than 750 Chicago area residents on a full-time and contract basis in support of the local economy. In addition to producing high quality fuels for a large portion of the network of nearly 5,500 locally-owned CITGO stations across the country, Lemont Refinery employees also make a major positive impact on the community. Each year, more than 2,500 volunteer hours and thousands of dollars are given in support of community programs such as Muscular Dystrophy Association, United Way and a variety of environmental and preservation programs. Operations at the Lemont Refinery began in 1925 with a major expansion, doubling the facility, in 1933. Over the years, new units were added to meet the demand for a better quality of gas for automobiles, aviation fuel for WWII, and the production of asphalt. Petróleos de Venezuela, PDVSA, acquired 100% ownership of the refinery in 1997 and began operations as CITGO Lemont Refinery. For more information, visit www.citgorefining.com/Lemont.

About CITGO
CITGO, based in Houston, is a refiner, transporter and marketer of transportation fuels, lubricants, petrochemicals and other industrial products. The company is owned by CITGO Holding, Inc., an indirect wholly owned subsidiary of Petróleos de Venezuela, S.A., the national oil company of the Bolivarian Republic of Venezuela. For more information, visit www.citgo.com/.