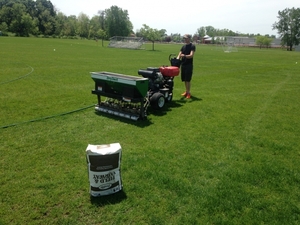 So Sodexo’s team at the school, including grounds manager Danny Volbrecht and director of operations Pat Dolan, did more research. Volbrecht discovered a new technique called dry-jecting. The DryJect process uses pressurized water, instead of spikes or tines, to aerate the soil up to ten inches deep. The team implemented this solution, followed by injecting a soil amendment made of sand and ceramic granules. The new technique stopped the flooding without damaging the pipes.

“These two guys are the hardest working people I have ever worked with,” said Lake Forest Academy athletic director Darrin Madeley. “Their attention to detail and making sure the faculty and the students at LFA get the best campus possible is incredible.”

With improved irrigation, the school was able to contract with COPA America, the leading global soccer tournament, to host practices for teams over the summer. The school also hosted the U.S. Women’s National Soccer Team for a scrimmage one week prior to their trip to the Olympics in Brazil. Now, at the start of the new school year, the LFA community and its students can play hard and have fun on a flood-free soccer field, come rain or shine.