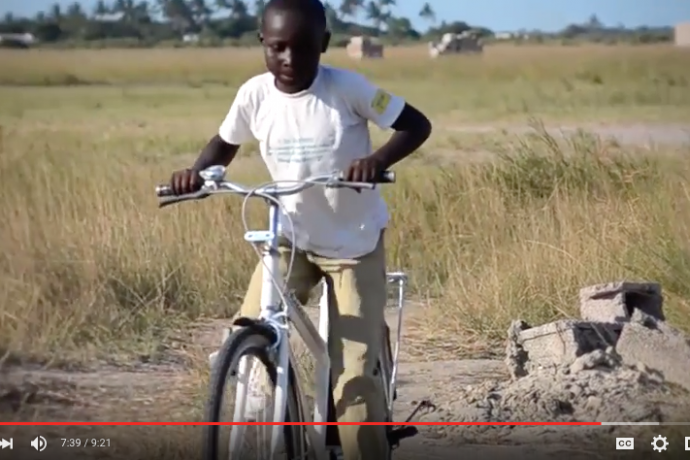 Mozambikes, an award-winning Mozambique-based social enterprise, has joined the Business Call to Action (BCtA) with a commitment to improve the lives and livelihoods of 50,000 of the country’s poorest people through the sale of affordable branded bicycles by 2018. The company will also establish a national sales and distribution network to provide an additional 125,000 people with transportation by 2020.

BCtA is a global initiative that encourages companies to fight poverty through inclusive business models. It is supported by the United Nations Development Programme (UNDP) and other international organizations.

Mozambikes’ inclusive business model involves importing bicycle components for local assembly, which are then branded the colors and logos of organizations. These companies distribute the bicycles to their stakeholders as transport, bonuses, incentives and social responsibility.  Alternatively, these organizations can pay to advertise on the bicycles, allowing the company to sell bikes to consumers at below-market rates. With this “Made by Mozambicans, For Mozambicans” model, the company’s workers take pride in building a product that will help their neighbors. The company is the first transportation provider in Mozambique that seeks to make bicycles truly affordable. Mozambikes also provides training and after-market service, including workshops for women riders and road safety campaigns in an effort to build the country’s bicycle industry.

“Our overarching goal is to fight poverty in Mozambique with efficient and affordable quality transportation – the bicycle!” says Lauren Thomas, Mozambikes’ Founder and Chief Executive Officer. “Solving the need for efficient, accessible, and reliable transportation with low-cost, sturdy bicycles opens up opportunities, autonomy, and employment for poor people across the country. We are honoured to be recognized by BCtA for our work as we continue to promote a culture of cycling in urban Mozambique.”

Nearly 20 years after the end of a civil war, poverty persists in Mozambique; according to the United Nations Statistics Division, 54 percent of Mozambicans live below the poverty line. Walking is the normal mode of transportation, but is particularly challenging in rural areas. Most rural people live on less than US$1 per day and lack basic services; two-thirds have to walk more than an hour to access healthcare. Only 60 percent have access to safe water and 57 percent to primary education, according to the 2012 International Fund for Agricultural Development’s Rural Poverty Portal. It is estimated that 70 percent of Mozambicans work in the informal economy, where their incomes are generated by what they can produce – usually through subsistence farming – which they must then transport to market.

Limited access to transportation in poor countries significantly impedes development. Bicycles offer efficient, accessible, reliable and importantly, affordable transportation. They can carry up to four times their weight, can travel must farther and faster than walking on foot, and are easy to repair. The bicycle industry in Mozambique is inefficient, however, with only a few providers offering low-quality items at prices that are out of reach for most Mozambicans. Bicycle programmes in other countries have proven to be effective development catalysts, showing that bikes alone can change people’s lives.

Mozambikes uses three distinct sales channels as part of its inclusive model. Companies and civil-society organizations can purchase fully branded bicycles for their own business needs. These might include awards to loyal customers, social responsibility initiatives in which bicycles are purchased by an organization for beneficiaries, employee bonuses or as transport for conducting business. Mozambikes examines each organization’s individual business model and proposes a program to suit the client’s needs.

Second, organizations can pay a fee for branding the bicycles, which allows Mozambikes to sell them at below-market rates in low-income markets. This channel is a growing sales channel; historically branding customers had preferred to take ownership of the bicycles for their own distribution.

Finally, people from around the world can donate bicycles through Mozambikes’ website and the company donates those bicycles to people earning less than $2 per day, who also explain to the company how the bicycle will improve their quality of life and income opportunities. This is a small portion of their business.

To date, Mozambikes has sold more than 7,000 bicycles, largely through its branded bikes channel. By 2020, annual sales are projected to reach 25,000 per year. Since bikes are commonly used by entire families, the lives of 125,000 will be positively impacted. Moreover, the business has reached breakeven with company cash flows sufficient to fund successive receipts. As a result of its success, the company is growing and is able to pay its workers above-minimum wage salaries.

Word of the business’ success has spread beyond Mozambique and the company has received inquiries from several neighboring countries. While Mozambikes remains focused on building its distribution network within Mozambique, its BCtA commitment involves initial marketing in South Africa and Swaziland, which can be serviced from the Mozambikes’ existing warehouse.

Mozambikes’ innovative model has been recognized by SIDA/Innovations Against Poverty, USAID Innovation Development Ventures, the William James Foundation (Africa Award; Venture Stage Award runner up), Cartier Women’s Business Initiative (finalist). It was also the SEED Award Winner in 2014, a finalist in the BIDNetwork Women in Business competition, a semi-finalist in the Echoing Green Fellowship, and has been featured CNN Marketwatch Africa and others.

“Mozambikes sales and distribution model, coupled with its efforts to build a viable biking culture in the country, is a prime example of the private sector addressing a development challenge through innovative market-driven initiatives,” said Sahba Sobhani, BCtA Acting Manager. “We are pleased to welcome Mozambikes as BCtA members and look forward to watching this model grow.”

About Business Call to Action (BCtA): The Business Call to Action challenges companies to advance core business activities that are inclusive of poor populations and contribute to the achievement of sustainable development goals. Worldwide, 137 companies, from SMEs to multinationals, have responded to the BCtA by making commitments to improve the lives and livelihoods of millions through commercially-viable business ventures that engage low-income people as consumers, producers, suppliers, and distributors of goods and services.

About Mozambikes: Mozambikes is a for-profit social venture formed in Mozambique to fight poverty in rural Mozambique with higher quality bicycles. Formed in 2010, Mozambikes employs twelve local workers across its warehouse in Tchumene and office in the capital city of Maputo in Southern Mozambique.  Over 7,000 Mozambikes have been distributed since inception into all ten Provinces of the country, with branding of organizations from all sectors and industries, including banks, telecom, consumer retail and NGOs. Donations are organized by affiliated corporation Mozambikes Social Development, a 501(c)3 based in Maryland, USA. Donations can be made via www.mozambikes.com/en/donate.  Read the success stories about the lives changed by Mozambikes at www.mozambikesblog.wordpress.com.