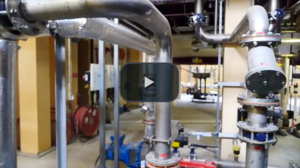 HAMILTON, Bermuda, Jul. 15 /CSRwire/ - The DEWAR’S® Aberfeldy Distillery in the heart of the Scottish Highlands is known for its rich tradition of producing some of the world’s finest Scotch – while at the same time, setting industry-leading sustainability standards.

The late 2014 installment of a biomass boiler at the Aberfeldy site cut the carbon footprint at the home of DEWAR’S® Blended Scotch whisky by a whopping 90 percent.

“Traditionally, distilleries are heavy users of fossil fuel – and that’s not good for the environment,” says Iain Lochhead, Operations Director at John Dewar & Sons Ltd., part of the Bacardi group of companies. “At John Dewar & Sons, we had many ideas for reducing fossil fuel usage and explored several options, but we settled on a biomass boiler.”

“Investment in biomass marks a sea change in the industry approach,” says David Williamson, Public Affairs & Communications Director, for the Scotch Whisky Association (SWA). “Moving away from boilers that use heavy fuel oil – to more efficient wood pellets – helps reduce energy costs and lower emissions into the environment. So we develop the industry as we nurture local surroundings and deliver a sustainable industry.”

“We estimate that under the current production schedule, we will reduce our carbon emissions from fossil fuel sources by up to six thousand tons per year of carbon dioxide at the DEWAR’S Aberfeldy Distillery,” adds Lochhead.

As part of the Bacardi group of companies, John Dewar & Sons honors the spirit of sustainability with these benchmarks at its five malt distilleries:

Since 2006, when Bacardi began tracking its global impact on the environment, it has reduced nonrenewable energy use by nearly 28 percent and decreased its greenhouse gas emissions from production by more than 28 percent. Building on current programs and efficiencies that reduce its environmental impacts, the Bacardi Limited “Good Spirited” sustainability program sets specific goals in three areas to help reach its vision of a net zero impact:

To learn more about Bacardi Limited and its “Good Spirited: Building a Sustainable Future” environmental initiative for sourcing, packaging and operational efficiencies across the entire Bacardi family of premium spirits and wine brands, visit http://www.bacardilimited.com/good-spirited.

Founded 153 years ago in Santiago de Cuba on February 4, 1862, family-owned Bacardi manufactures its brands at 29 facilities and sells in more than 160 countries. Bacardi Limited refers to the Bacardi group of companies, including Bacardi International Limited. www.BacardiLimited.com

BACARDI, THE BAT DEVICE AND OTHER MARKS APPEARING ON THE BACARDI GROUP PRODUCTS SHOWN AND/OR QUOTED IN THIS VIDEO NEWS RELEASE ARE TRADEMARKS OF BACARDI & COMPANY LIMITED OR OF OTHER SUBSIDIARIES OF BACARDI LIMITED.