Assistance part of broader CITGO Caring for Our Coast Initiative 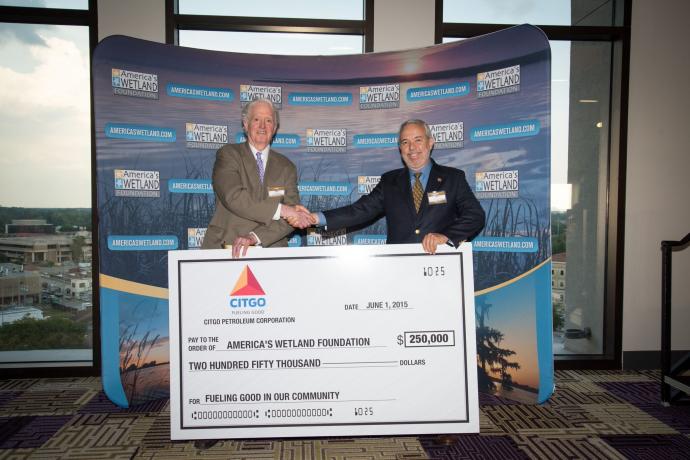 Marking the start of the 2015 hurricane season and commemorating the 10th anniversary of Hurricanes Katrina and Rita, CITGO Petroleum Corporation joined America's WETLAND Foundation as it announced new restoration efforts in Lafourche Parish during its Toast to the Coast celebration on June 1. The annual event honors individuals and businesses making a difference in the fight to save Louisiana's coast.

To support America's WETLAND Foundation and its upcoming work, CITGO has donated $250,000. This funding will support a shoreline restoration effort along the Gulf Intracoastal Waterway in Lafourche Parish, that seeks to end coastal erosion through the use of green technology.

“CITGO’s ‘Caring for Our Coast’ environmental conservation program helps combat coastal land loss along the Gulf Coast. The company’s resources and volunteers have supported numerous conservation events from New Orleans to Corpus Christi,” remarked Lake Charles Mayor Randy Roach during the Toast to the Coast celebration. “Now, with the new hurricane season upon us, we hope that the projects that CITGO is supporting will help bring greater attention across the private sector to the good that can result from public private partnerships.”

When presenting the donation, Rafael Gómez, CITGO vice president of strategic shareholder relations, government and public affairs, said:  “For more than 80 years, CITGO has played an integral role in the Gulf Coast community, and we are dedicated to protecting the natural environment here for future generations. He added that: “This region is not only where we do business, it is the place we call home – which is why we have continued to invest in the area in the 10 years since Hurricanes Katrina and Rita first tragically struck.”

The support of America's WETLAND Foundation is part of CITGO’s larger Caring for Our Coast initiative, a series of programs extending the company's ongoing commitment to environmental protection and restoration leading up to the 10th anniversary of Hurricanes Katrina and Rita in August and September of this year. After the storms, CITGO was one of the first private organizations to take part in relief efforts, providing funding and fuel to non-governmental organizations and first responders and assisting in evacuating citizens out of harm's way. The operations at the CITGO Lake Charles refinery were brought back online in record time so that fuel and other desperately-needed products could be provided to the region, as well.

For more information on CITGO’s environmental efforts in commemoration of Hurricanes Katrina and Rita, go to www.CITGOCaringforOurCoast.com.

About CITGO
CITGO, based in Houston, is a refiner, transporter and marketer of transportation fuels, lubricants, petrochemicals and other industrial products. The company is owned by CITGO Holding, Inc., an indirect wholly owned subsidiary of Petróleos de Venezuela, S.A., the national oil company of the Bolivarian Republic of Venezuela. For more information, visit www.CITGO.com.