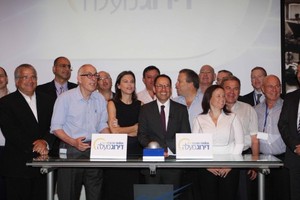 TEL AVIV, Israel, Jun. 16 /CSRwire/ - Maala unveiled the results of its 2011 CSR Index at the Tel Aviv Stock Exchange this month. Eighty-five leading companies participated in the Index, representing 60% of the business sector's output. The Index includes public companies traded on the TASE, as well as local branches of multinationals such as: Intel, Microsoft, HP, Siemens SAP, P&G, Unilever, Motorola, Coca Cola and others.

A social-environmental snapshot of the Israeli economy, as revealed by the 2011 Index:

The 2011 Maala Index reveals a continuing upswing in the adoption of CSR principles by Israel's most prominent companies, with 12 new participating companies in 2011 and 15 more set to join in 2012. The purpose of the Index is to encourage companies to integrate social and environmental goals into their business models.

Maala CEO Momo Mahadav: "The Maala Index is a tool for integrating social and environmental values into the workings of the economy's most prominent companies. Many of the standards in the Index have been adopted by the companies and are contributing to the creation of healthier organizations."

Mahadav added: "The results of the 2011 Index indicate a positive trend in the adoption of social and environmental responsibility principles among Israeli companies. The combined score of 18 participating companies improved this year by over 10%. However, the process of internalizing change is one that takes place over the long term. The challenge for 2012 is to move from formulating policies and procedures toward implementation."

The companies participating in the Index are public and private firms with an annual turnover above NIS 320 million, and which are included in B&D Israel, BDi or TASE lists. Companies are scored and given one of 3 possible rankings: Platinum, Gold or Silver.

Participating companies are asked to submit data regarding their activities as they relate to: ethics, community investment, environment, corporate governance and workplace. The Index gives special consideration to issues of transparency, such as: publication of ethical codes, philanthropic policy and CSR reporting. Companies' reports are signed by their CEO, and cross-referenced with financial reports and additional quantitative assessments.

Data submitted by participating companies is analyzed by Greeneye, the Israeli representative of EIRIS, in consultation with S&P Maalot, based on models developed by

Based on the 2011 Index, companies with strong performance in CSR will be grouped into an investment tool on the Tel Aviv Stock Exchange.

The Maala Index is completely voluntary. Participating companies choose to report their activities and expose their data without being required to do so by law. Maala welcomes additional companies who wish to participate in the Index in the future.

Maala has produced the Maala Index, which ranks public and private companies according to their commitment to the principles of CSR, since 2003, and also produces the Code for Social Management in Companies, a guidebook for CSR-based management.

Maala - Business for Social Responsibility is the leading advocate for corporate social responsibility and good corporate citizenship in Israel. Founded in 1998, Maala is a non-profit membership organization that works with businesses to develop and implement CSR strategies. O...