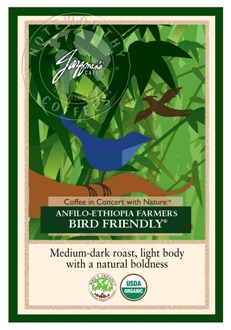 GAITHERSBURG, MD. - September 17, 2008 - Jazzman's Cafe, the award-winning coffeehouse and bakery cafe from Sodexo's Retail Brand Group, unveiled today a Smithsonian Migratory Bird Center (SMBC), Bird Friendly(R); coffee blend; the first-ever coffee from Africa to have such a distinction. Double certified for sustainability and sourced from the Anfilo Specialty Coffee Enterprises in Ethiopia, the rich and flavorful roast debuts nationally this month at the more than 200 Jazzman's Cafes.

This latest installment from the Jazzman's Noteworthy Coffees(TM) Series, a distinctive line of coffees featuring beans from farming cooperatives and communities around the world, was sourced from a cooperative established by African farmer Samson Guma. The cooperative gained its Bird Friendly(R) certification in 2008 and consists of 118 small scale farmers.

"Jazzman's Cafe, the Retail Brand Group and Sodexo are committed to sustainable development in agricultural communities around the world--in fact, all of our coffees come from sustainable sources," said Erica Milios, director of brand development for Sodexo's Retail Brand Group. "Our purchase of this coffee makes it possible for the Anfilo farmers to continue their efforts to preserve forest habitat and also bring the concepts of habitat preservation and Bird Friendly(R)coffee to the Ethiopian coffee industry."

Speaking of the farmers efforts to gain certification, Samson Guma explains, "It has taken many years to get to this point, I am convinced that the solution is in producing a great tasting coffee in a sustainable way, and selling directly to buyers with a social and economic interest, will inevitably bring a greater return to the farmers and an appreciation to consumers. We are very pleased to have engaged in this relationship with Jazzman's Cafe."

Bird Friendly(R)certification was created in the late 1990s by the staff of the SMBC at the National Zoological Park in Washington, D.C. It is awarded to coffee farms that maintain shade cover to provide a substantial habitat for migratory and resident birds. Farmers forego conventional coffee growing methods of clearing the land of trees in order to maximize production.

"Coffee consumers can now rely on a science-based set of criteria defining shade coffee that truly brings 'coffee-as-habitat' into focus," says Robert Rice, geographer/policy researcher at the Smithsonian Migratory Bird Center. "We're excited to have Sodexo and the Retail Brand Group involved in linking conservation to the marketplace."

Retail Brand Group
The Retail Brand Group, Sodexo's retail restaurant development team, offers a comprehensive portfolio of branded restaurant concepts in all of the most popular restaurant categories. With 525 locations in North America, each of the fast-casual brands, including the award-winning Jazzman's Cafe and Pandini's, is a fully-supported operation offering memorable, guest-pleasing dining experiences with competitive financials. Learn more about the Retail Brand Group at www.retailbrandgroup.com.

Sodexo, Inc.
Sodexo, Inc. (www.sodexo.com) is a leading integrated food and facilities management services company in the U.S., Canada and Mexico. Its corporate citizenship priorities include fighting hunger and malnutrition, improving the quality of life of our customers and employees, promoting health and wellness, conducting ethical business, and promoting sustainability. Sodexo's food and environmental platform in North America focuses on sourcing and providing locally grown foods, improving nutrition, promoting local economies, energy conservation and carbon reduction, reducing the use of toxic chemicals, integrated waste management and minimizing packaging. The Sodexo Foundation (www.helpstophunger.org) is an independent charitable organization that, since its founding in 1999, has made more than $9.2 million in grants to fight hunger in America.