Seen on Screen: The Importance of Disability Representation

Seen on Screen: The Importance of Disability Representation 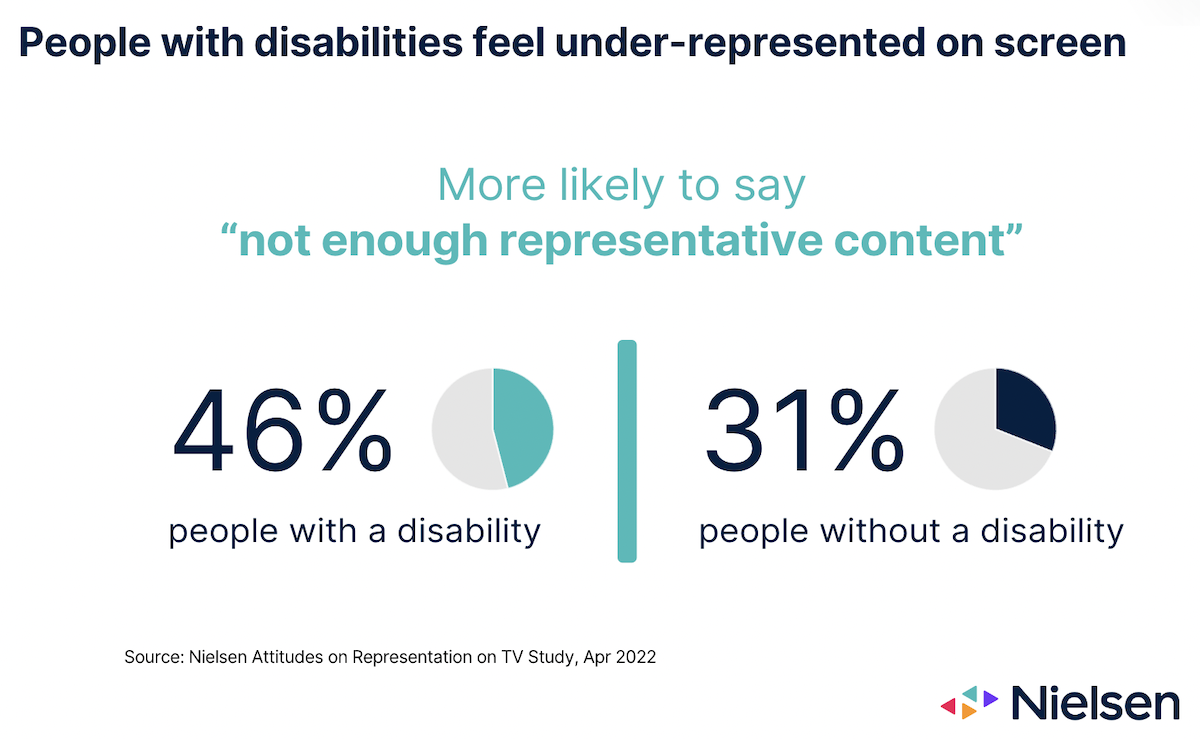 Disability representation on television is increasing, but slowly. And in an ever-expanding programming landscape, it’s also increasingly harder to find, and viewers in the disability community are struggling to feel seen.

In the U.S., 26% of the adult population lives with a disability, and 1 billion people worldwide are members of the disability community. But as prominent as this community is in the population, it remains largely unseen, or inaccurately depicted, in content that appears on screen.

As of September 2022, there were 923,229 total television program titles available to audiences, up 43% since the third quarter of 20191. And while the volume of disability-inclusive content has increased over time, progress is slow, especially when compared to the increase in available programming generally. Disability inclusion in video content peaked in 2019, when 518 productions were released featuring disability themes and characters2. But this number is just a drop in the bucket when it comes to total content production. As of December 2022, 7,556 video titles included disability thematic attributes, but that represents just 4.1% of the 183,089 total titles with descriptor metadata released during the same period.

With inclusion numbers like these, it’s not surprising that 46% of people with disabilities feel their identity group is underrepresented on TV. In fact, disabled people are 34% more likely than the general population to feel they are under-represented on screen3. 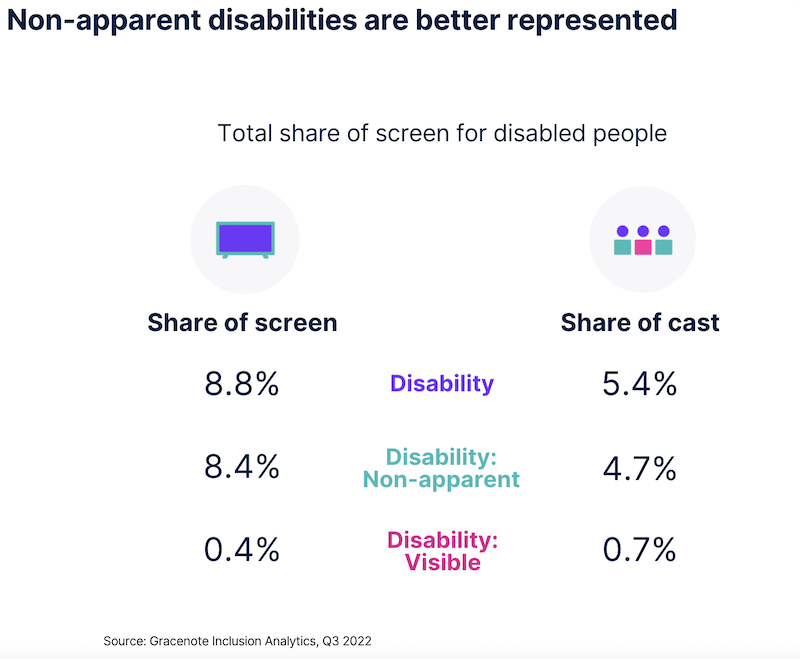 While screen time is low across all platforms, cable stands out as having the highest total disability representation on screen, at 9.5%. And this on-screen representation is having an effect on how audiences with disabilities feel about cable—disabled people are 23% more likely to say that cable is the most relevant platform to them, compared to the general population2.

“The inclusion of disabled talent does not happen by accident. It is critical to have representation behind the scenes to ensure better and more authentic representation on screen,” said Lauren Appelbaum, SVP of Communications and Entertainment & News Media, RespectAbility. “We need people with disabilities in a position to influence storylines and narratives, help make decisions about casting and talent, and represent the disability community throughout the creative process.”

Spotlight: Dead to Me

One show putting a spotlight on people with visible disabilities is Dead to Me—a dark comedy about the friendship between a recent widow and a free spirit with a secret. Actress Christina Applegate, who was diagnosed with multiple sclerosis in 2021, plays one of the two main characters, Jen. As one of a very few leading characters with a visible disability, Applegate is aware of how her disability might be perceived by viewers.

In an interview with The New York Times, she explained, “This is the first time anyone’s going to see me the way I am. I put on 40 pounds; I can’t walk without a cane…I’m sure that people are going to be, like, ‘I can’t get past it.’ Fine, don’t get past it, then. But hopefully people can get past it and just enjoy the ride and say goodbye to these two girls.”

With its season 3 premiere debuting at number 4 of Netflix’s top 10 list, and with more than 290 million hours streamed of the show to date, Dead to Me’s popularity demonstrates that audiences aren’t shying away from watching content with disabled talent, rather, they are embracing it.

But just the inclusion of talent with a disability isn’t enough. People living with disabilities want to see the authentic realities of everyday life depicted in the content they watch, and current representation is falling far short of expectations. According to our April 2022 Attitudes on Representation on TV Study, people with disabilities are 52% more likely than the general population to say the portrayal of their identity group is inaccurate. 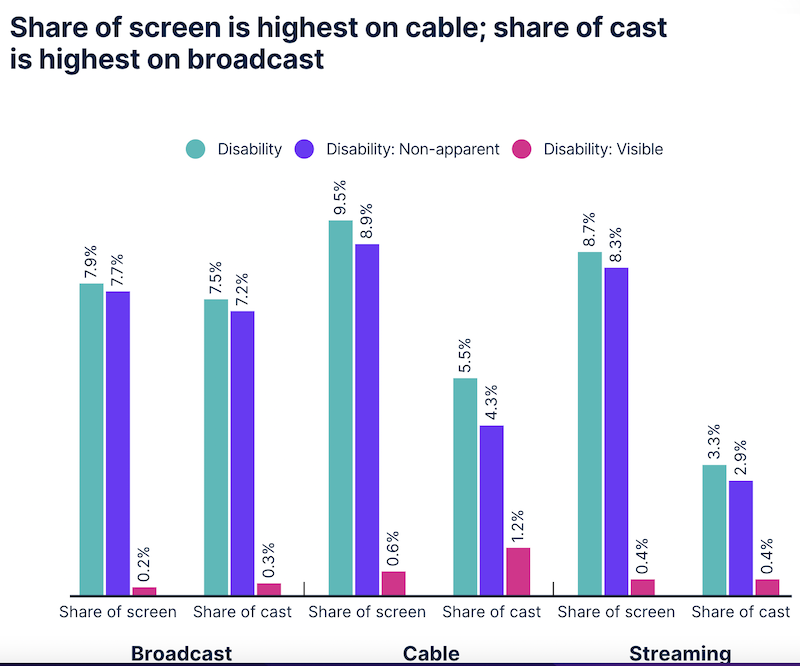 And the advantage for brands can mean increased revenue for inclusive content providers and platforms. Brands spent $738 million on advertisements in disability-inclusive broadcast and cable programs—7.5% of the total $9.9 billion in ad spend across broadcast and cable during the same period4.

The media and entertainment industry has led the charge in advocating for diversity in all forms, and holds the power to raise awareness and drive disability representation. Green-lighting more projects, including more disabled talent on- and off-screen, encouraging self-ID so studios can find talent to ensure authentic depictions are a few steps studios and content creators can take. In a world where the struggle against inequities and stereotypes persist, media has a responsibility to make disability inclusion a reality.