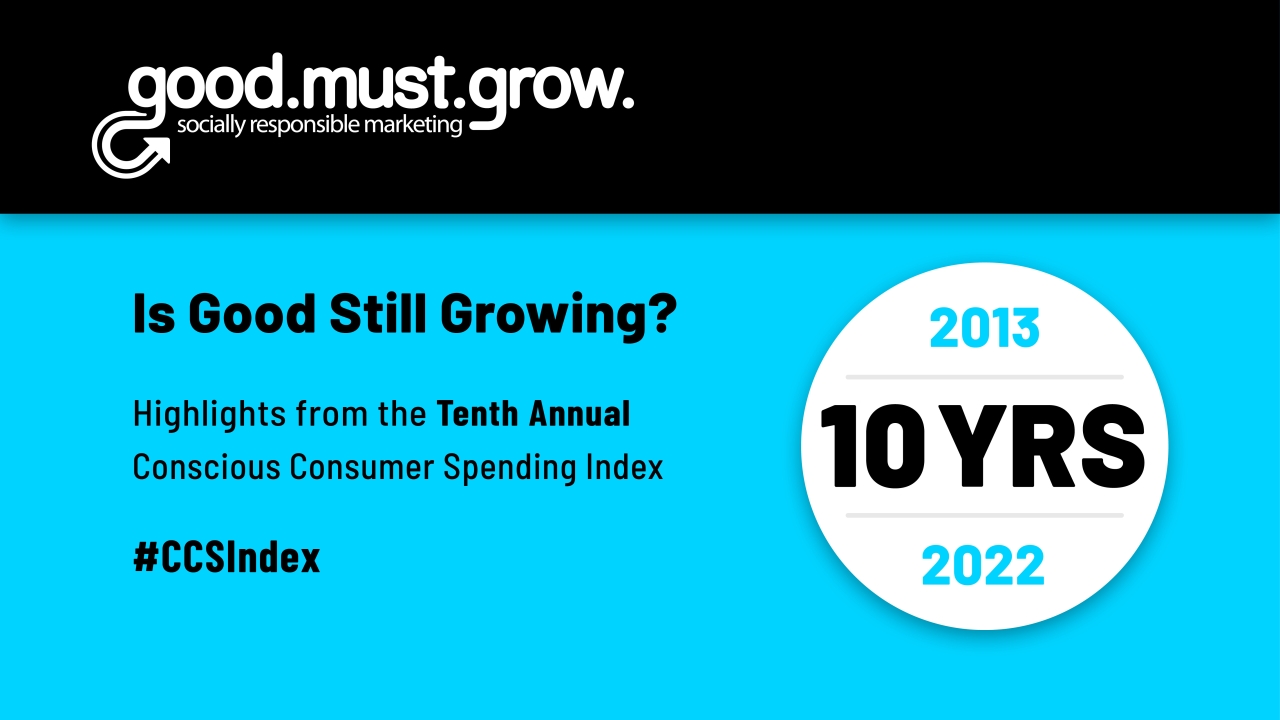 December 15, 2022 /CSRwire/ - After a full decade of the Conscious Consumer Spending Index (#CCSIndex), progress with socially responsible attitudes and behaviors is showing mixed progress among American consumers. Conducted annually each fall since 2013, the #CCSIndex is an ongoing benchmarking study. Good.Must.Grow., a socially responsible marketing consultancy, administers the Index to gauge momentum for conscious consumerism, charitable giving and earth-friendly practices.

The Index score is calculated by evaluating the importance consumers place on purchasing from socially responsible companies, actions taken to support such products and services, and future intent to increase the amount they spend with responsible organizations. Based on the design of the Index’s algorithm, even a one-point change in overall score indicates meaningful movement of consumer sentiment. 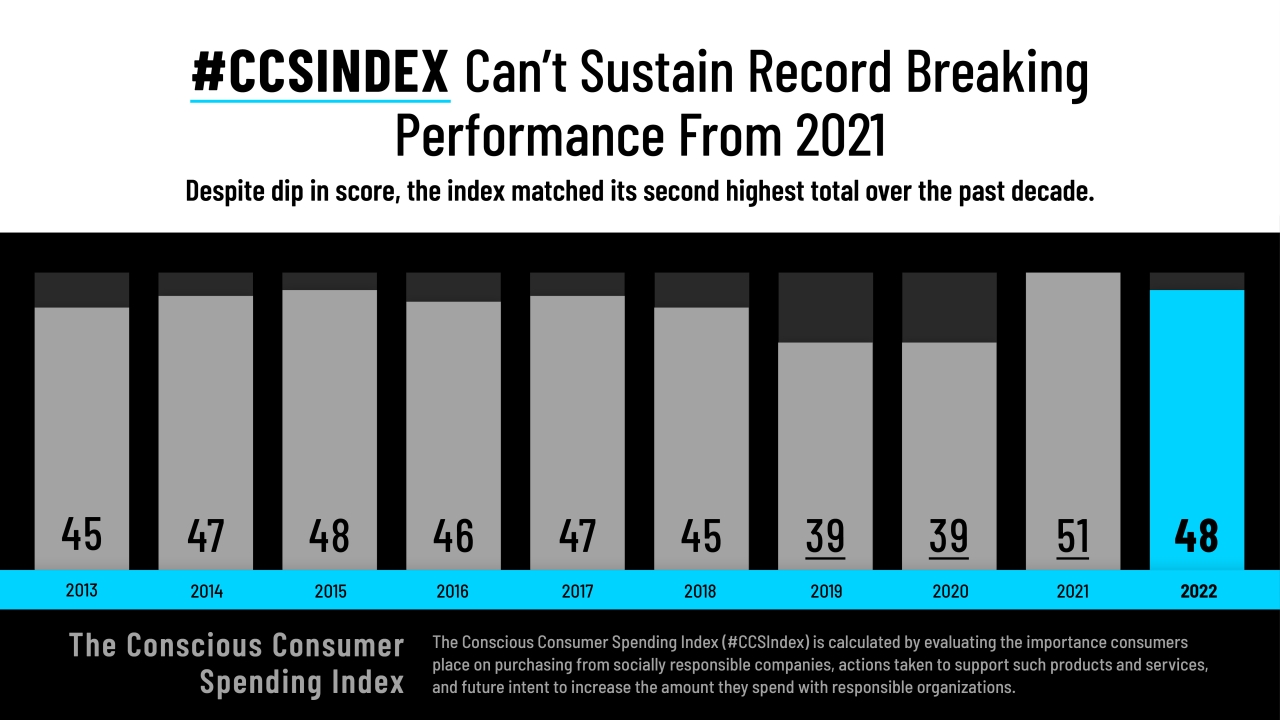 After reporting a record-low of 39 in 2020, the Index made a dramatic recovery in 2021 by posting a record-high of 51. This year, the Index experienced a slight decline to 48, driven largely by a decrease in purchasing power among Americans.

With inflation lingering near 40-year highs and one quarter of Americans reporting a decrease in their household income in the past year, more individuals are finding it challenging to support socially responsible brands, which typically cost more than traditional products and services. In fact, almost half of Americans (46%) said the cost of socially responsible goods and services prevented them from buying more from conscious companies.

This decrease in purchasing power resulted in only 57 percent of Americans reporting they purchased goods from socially responsible brands in 2022, down from 64 percent in 2021 and 62 percent from the inaugural index results in 2013. 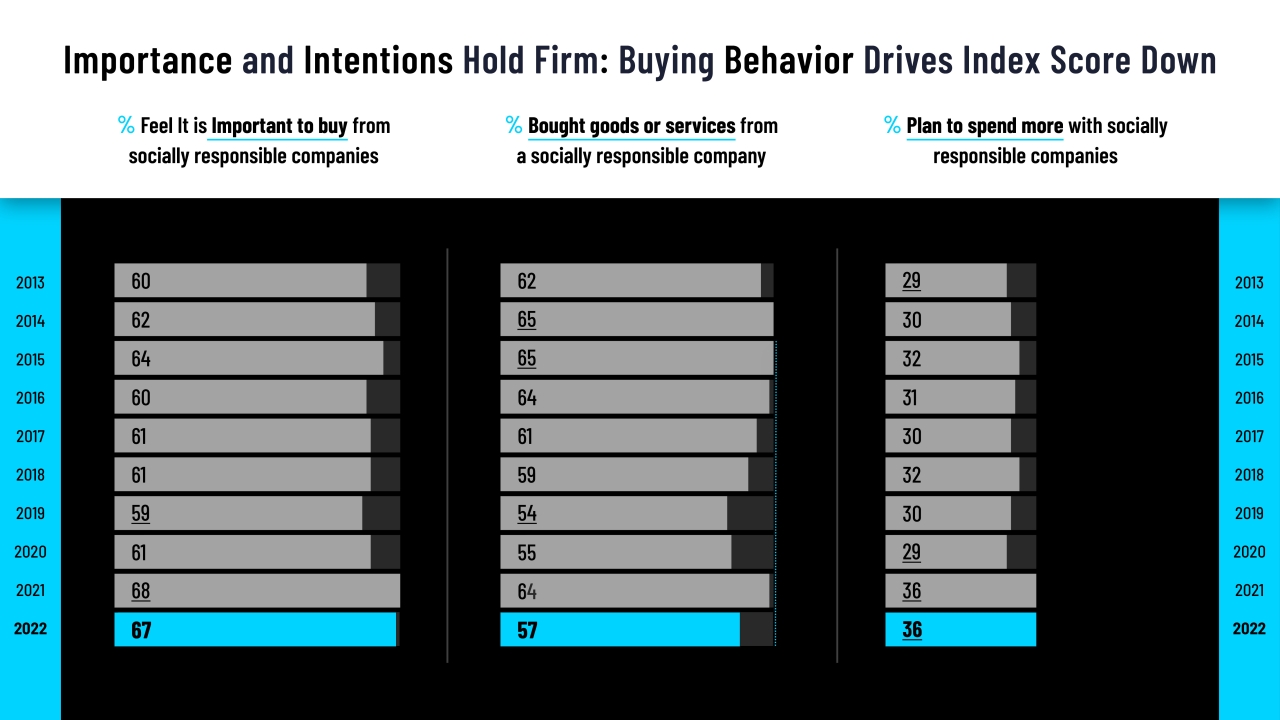 “I believe this year’s data demonstrates several things, one of which is the tension involved with following through on good intentions in the face of economic pressures,” said Heath Shackleford, founder of Good.Must.Grow. “Those of us working for the growth of socially responsible brands must continue to prioritize competitive pricing. Whether it is perception or reality, the idea that good products and services inherently cost more is an obstacle to this movement.”

Do Good Behaviors Trending Up, and Down

Since 2013, the percentage of Americans who believe it is important to support socially responsible products and services has increased from 60 to 67 percent. Meanwhile, the percentage who plan to increase the amount they spend with such brands has risen from 29 percent to 36 percent. In 2013, 25 percent of Americans reported boycotting brands that were not socially responsible. In 2022, 32 percent were choosing not to spend money with such brands.

In less fortunate news, 89 percent of Americans reported being green in 2013, but only 81 percent confirmed this behavior in 2022. Meanwhile, only 66 percent of consumers said they reduced their consumption of gas, energy and purchases in 2022, compared to 79 a decade ago. Even more alarming, those who made financial contributions to a nonprofit dropped by 20 percent from 2013 to 2022. 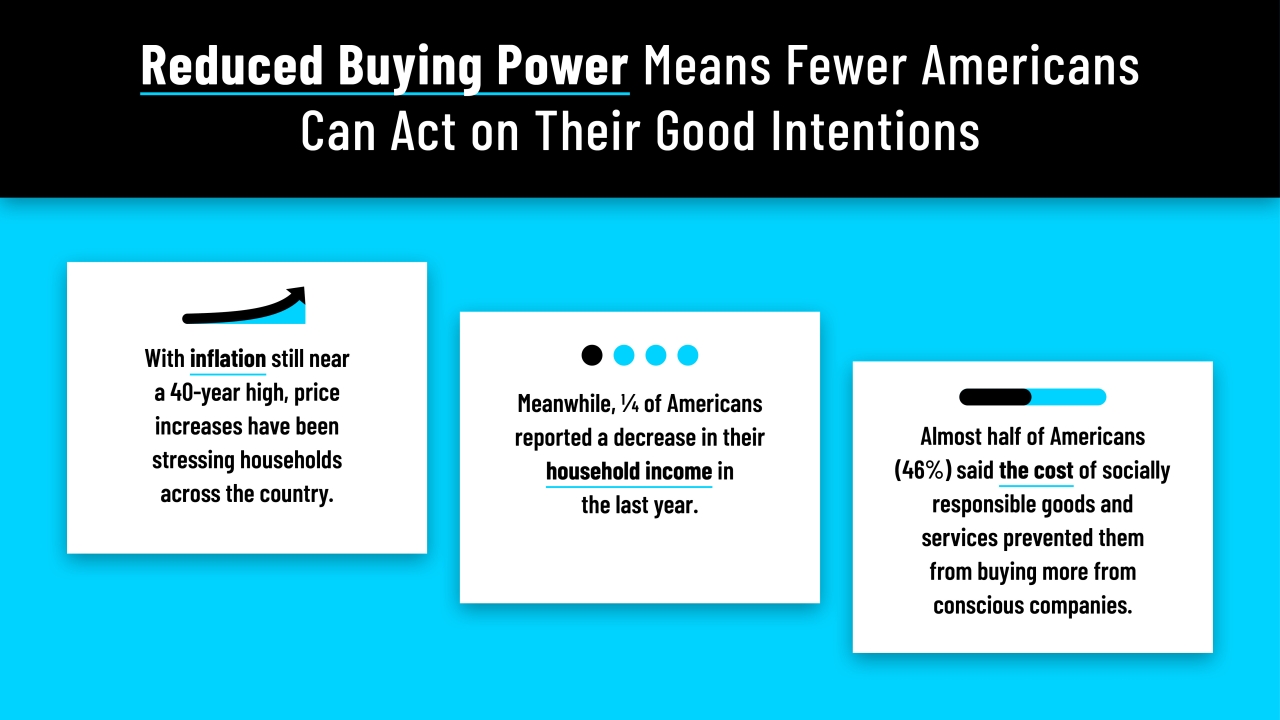 Trust Is on the Rise

In 2013, only six percent of Americans fully trusted brands who claimed they were socially responsible. In 2022, that percentage has ballooned to 18 percent. Consumers also have more faith across the board in the ability of major corporations, social enterprises, nonprofits and local and federal government to fuel positive changes in society. 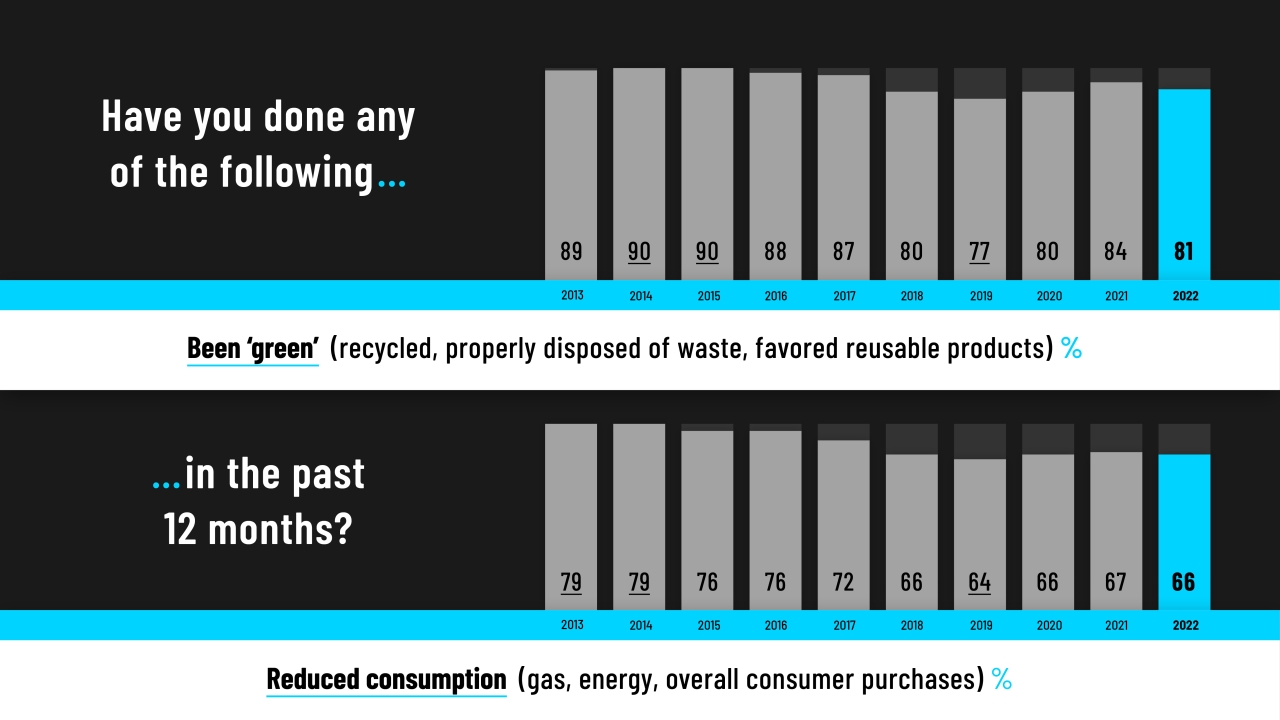 When asked about the factors most important to consumers as they decide which brands to support, 83 percent said meeting their needs was a priority, while the same percentage cited the organization’s trustworthiness. How the brand treats customers, employees and the community was important to 82 percent of consumers, while 80 percent also cited a company’s ability to protect their health and safety. Meanwhile, 70 percent of individuals said a company’s purpose or mission was an important determinant for support. 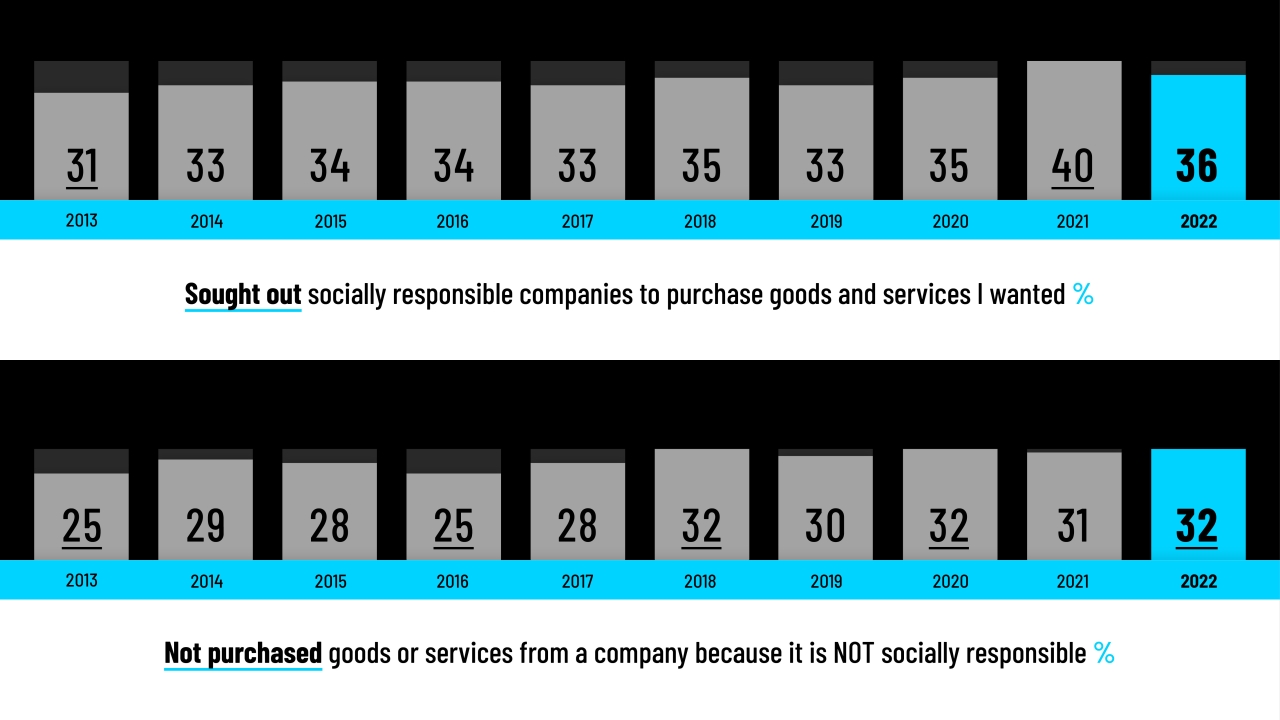 “There are two ways to think about what consumers are valuing today,” said Shackleford. “On the one hand, a strong majority of consumers still think a company’s mission is an important factor when they are shopping. On the other hand, companies can’t rely on a higher calling alone to win consumer favor. They first have to meet basic needs before purpose can become a game changer.” 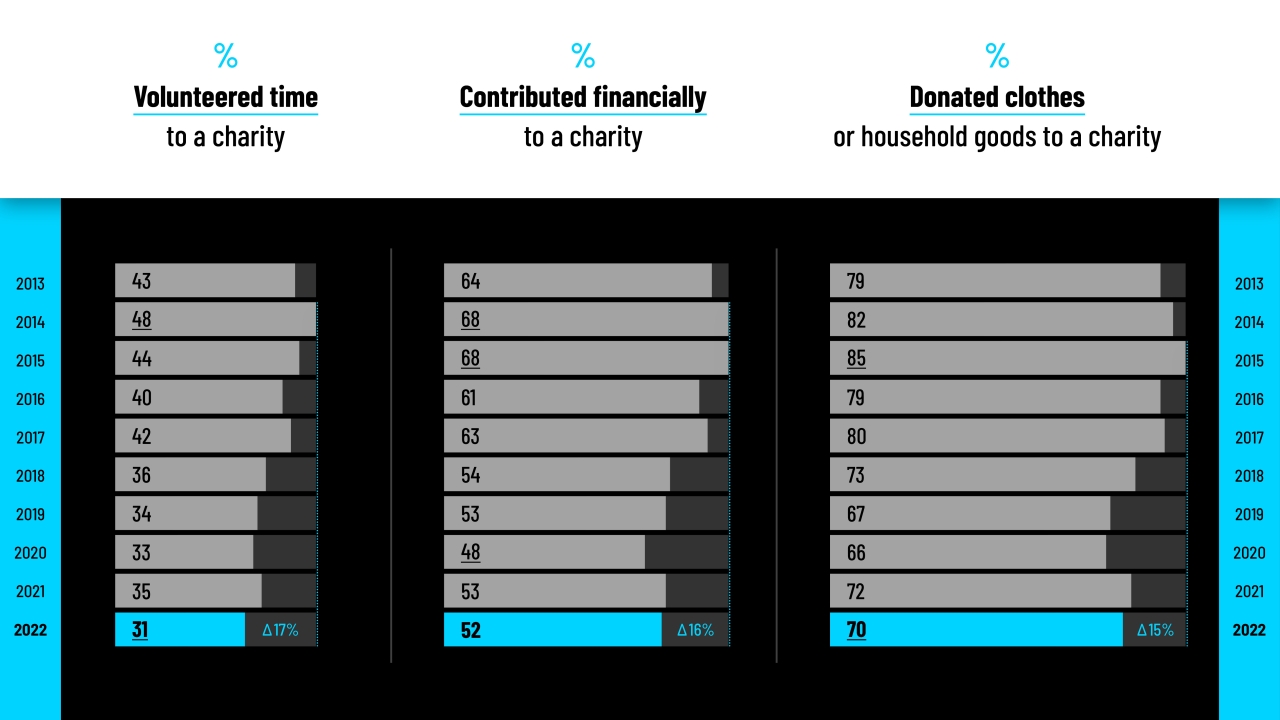 The World Keeps Getting Worse 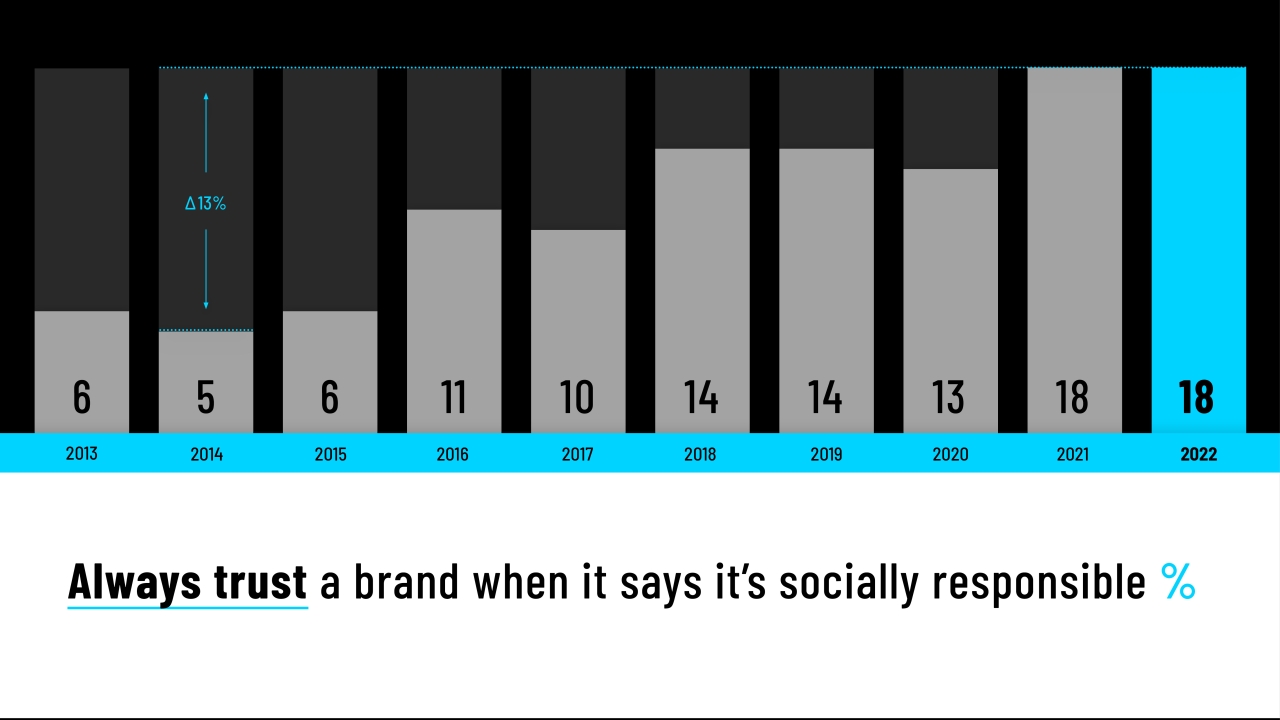 This year marked the #CCSIndex’s eighth annual top 20 “Good Company” poll, compiled by responses to the question, “What company or organization do you think of first when you think of socially responsible companies/organizations?” Based on unaided recall, organizations were ranked by how frequently they were named.

For the fourth straight year, Amazon tops the list and does so with a dominant showing. Amazon received twice as many votes as the number two company, Google. Tech giants claimed four of the top seven spots this year. Meanwhile, TOMS fell off the list for the first time. The company was the top-voted brand the first two years of this poll. 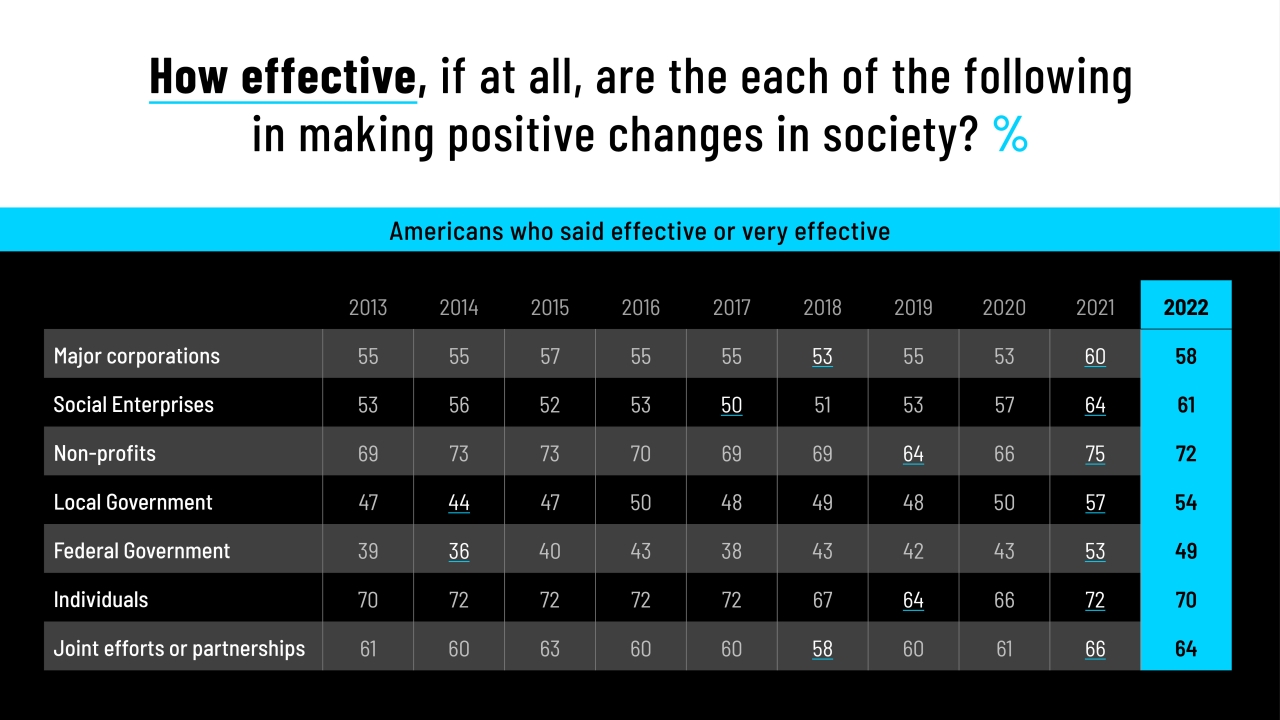 This year’s top 20 are as follows: 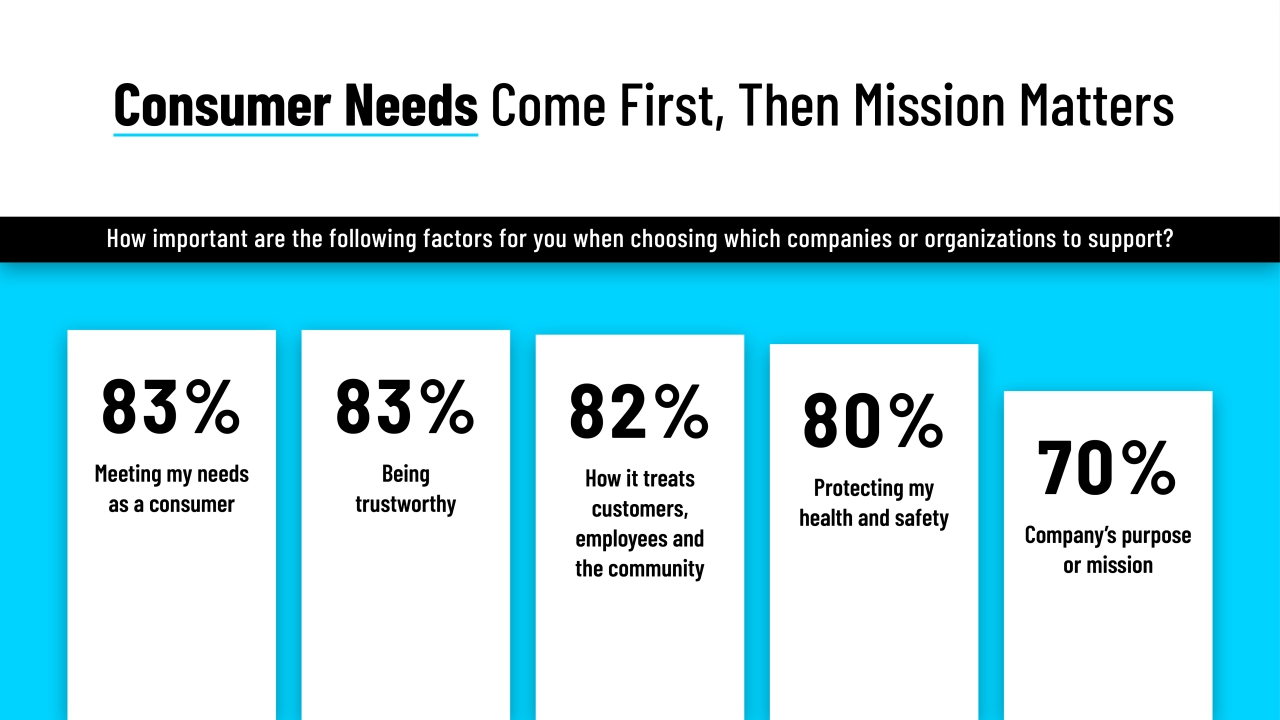 Conducted annually each fall since 2013, the #CCSIndex is an ongoing benchmarking study that gauges momentum for conscious consumerism and charitable giving. In total, 1,005 Americans were surveyed (margin of error is +/- 3%). Sampling was provided by Dynata. For more information on the Conscious Consumer Spending Index, please visit www.goodmustgrow.com/ccsindex

Doing good by any means necessary. That’s our motto. We are obsessed with helping good organizations grow. We provide strategic marketing support for socially responsible businesses, nonprofit causes and individuals committed to making our world a healthier place. We also fuel our own initiatives aimed at specific causes, ranging from human trafficking to addiction to health and wellness. Proud to be a Certified B Corp and ranked as three-time Best for the World company. Learn more at goodmustgrow.com